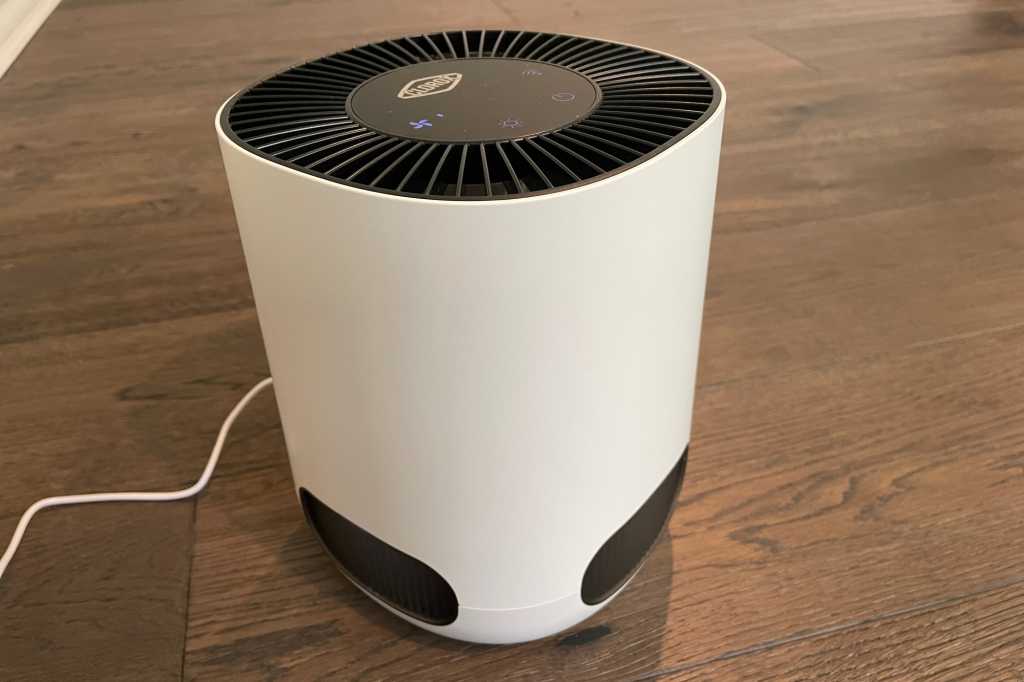 Clorox’s smallest purifier is short on features, but it does offer an Alexa connection.

Our Clorox Large Room Air Purifier review found that home appliance with a familiar name to be an effective, if otherwise undistinguished purifier designed for big spaces. If you need something smaller and are onboard with the Clorox brand, consider this “tabletop” sized purifier, which is designed for rooms 80 to 200 square feet in size. While its CADR ratings of 53 cfm (smoke), 59 cfm (dust), and 55 cfm (pollen) are low, they’re acceptable for a unit that’s designed to be used in something no bigger than a bathroom or a small bedroom.

At just 3.15 pounds and measuring a little over 9 inches high and 7 inches wide and deep, the unit is indeed small enough to put on top of a desk—although you’re more likely to want to put it underneath, or perhaps behind the toilet. The filter is pre-installed through a hatch in the bottom of the unit. Air is drawn in through three intake vents positioned at the base of the device, and clean air is emitted from the top.

Unlike some small purifiers, the Clorox Tabletop uses a true HEPA filter (cylindrical style) to capture particulate matter. The company rates the filter to last from 6 to 12 months, and replacement filters cost $30 each.

This review is part of TechHive’s in-depth coverage of home air purifiers.

Controls on the touch-sensitive top panel are basic to a fault. Three fan speeds (but no auto mode) are available, as are three light brightness settings (which also includes light emitted through the three aforementioned vents). At the lowest fan speed, the unit runs very quietly—it’s definitely on the loud side at levels 2 and 3, and there’s no way you’d want to have it running right next to you on your desk at either of those levels.

The only other control is a wireless button that allows you to connect the purifier to your Wi-Fi network (2.4GHz only). Unlike many smart devices, the Clorox Tabletop purifier does not use its own app but rather uses Amazon’s Alexa app for connectivity. You do not need an Echo device on your network to control the purifier unless you want voice control. With the Alexa app, you can still deal with basic operations (including fan speed and lighting controls). And thanks to the Alexa ecosystem, you can use the app to create routines that allow for automations or connections to other Alexa devices. Alexa’s smart device controls have always been very stripped-down, and that’s the case here; however, since the purifier itself has such a limited feature set, this isn’t much of a handicap.

The $120 purifier—available for $100 if you don’t want the wireless features—feels just a touch on the pricy side given the unit’s limited feature set. Notably, there is no air quality indicator, nor an automatic fan speed mode, which means it’s up to the user to determine when higher fan settings need to be activated. Most people, I expect, will “set it and forget it” in a corner somewhere. If you’re not already an Alexa user, the wireless features included might not sound like much of a draw; then again, they just might serve as a gateway to the smart home technology.