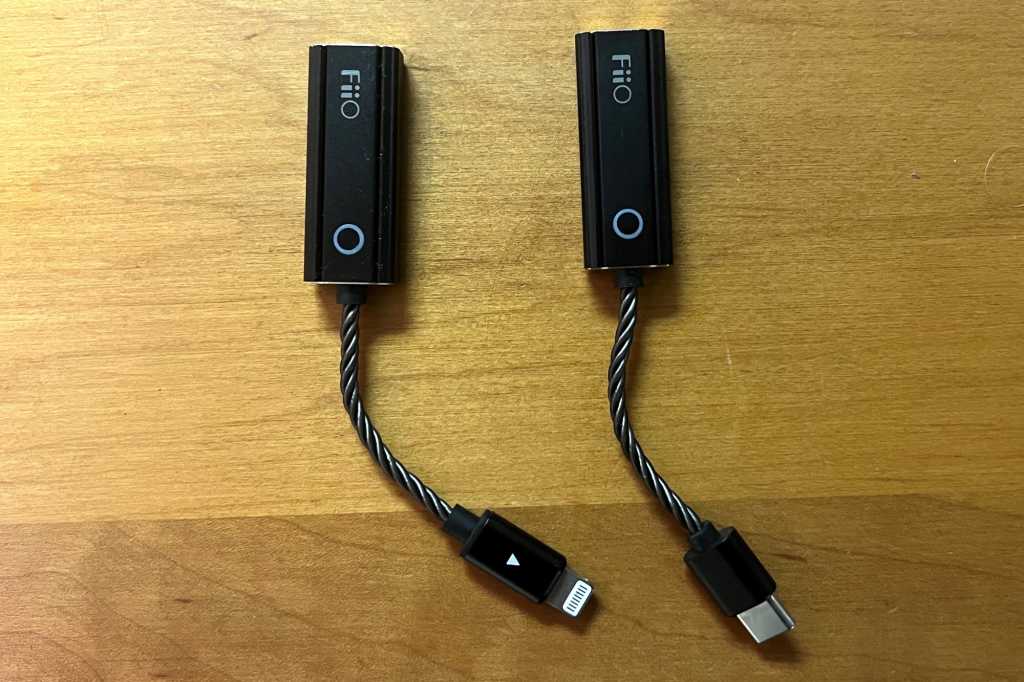 That captive cable will have either a USB-C or a Lightning connector, depending on which model you buy, so there’s no using the same KA1 with both an iPhone and an Android phone—or with an iPhone and a PC or Mac, for that matter. (I reviewed both; the USB-C version costs $5 less.)

The guts of the KA1 feature an ESS Technology ES9281AC Pro DAC that decodes up to 32-bit/384kHz PCM audio, native DSD64/128/256, or DoP (DSP over PCM) DSD64/128. An easy-to-read ring light on the front of the unit glows blue to indicate an incoming signal with a sampling rate less than 48kHz, yellow it’s higher than 48kHz, green if it’s as DSD file, and magenta is for MQA rendering.

I tested the Fiio KA1 with an iPhone 13 Pro Max and used the outstanding Questyle M15 DAC and an Apple Lightning-to-3.5mm Headphone Adapter for comparison. The M15 costs $249 and the Apple adapter costs $9. You can read our Questyle M15 review at the preceding link.

For listening purposes, I dug out an old pair of Apple earbuds with a 3.5mm jack. I also listened with a pair of Sony MDR-7506 studio headphones ($99) and Sennheiser’s flagship in-ear monitors, the $1,500 Sennheiser IE 900 (review pending).

How did you evaluate the Fiio KA1?

Listening to “The Big Sky” from Kate Bush’s 1985 album Hounds of Love on Spotify, there wasn’t much of a noticeable difference between the Apple adapter, the Fiio KA1, and the Questyle M15 DAC when using the Apple earbuds. When switching to the Sony headphones, there was considerably more detail from the KA1 than the adapter but not as much of an improvement in sound quality as you’d expect when listening to the Questyle M15.

The Senneheiser IE 900 are a superior set of earbuds, and they start to highlight the differences between the connectors. There’s a consistent, blaring loudness when playing back through the Apple adapter. The song’s backing vocal choir sounds huge, but indistinct. Once I switched to the KA1, there was more of a sense of individual voices blending versus the audio wall that came with the Apple adapter. Surprisingly, there wasn’t much difference between the KA1 and the Questyle M15 playback quality in this configuration.

This step made it clear that there’s no point in getting a DAC until you’ve made at least a minimal investment in good, wired headphones. The Apple earbuds won’t be included in the next round of listening. If you’re a dedicated Spotify listener, you might not want to make this kind of investment before the service finally upgrades its streaming to at least CD quality.

Playback was far more revealing when listening to a Qobuz 96kHz Hi-Res stream of Echo & the Bunnymen’s “The Cutter,” from the 1983 album Porcupine. The epic bagpipe hook near the song’s midpoint remains a high point of 1980s rock, but the instrument can sound remarkably harsh through the wrong audio chain. The Apple adapter can’t handle the bagpipes, and the 80s drum sound comes across even more brittle than intended.

The KA1 really shines on this track with both the Sony and the Sennheiser headphones, capturing the overtones of the bagpipes and creating some depth in the drum sound. The Questyle M15 delivers even more detail but, again, the gap wasn’t as large as I expected.

On Megan Thee Stallion’s track “Budget (feat. Latto)” from her 2022 album Traumazine streamed as an MQA Master track from Tidal, there’s an impressively deep soundstage and the spaces in the track are dead silent. I’d give the nod to the KA1 over the Questyle M15 on Tidal tracks, even though both DACs are capable of playing MQA tracks.

The last test used the KA1 with the USB-C port on an M1 MacBook Air. I listened to a Hi-Res lossless stream of Madonna’s “Open Your Heart” from the 2022 remastered collection Finally Enough Love: 50 Number Ones, using the Sony headphones with the computer’s headphone jack and then via a USB-C port with the KA-1.

Is the Fiio KA1 a good value?

At this point, Apple should just ditch the headphone jack on its computers if it’s going to market Apple Music as a high-quality streaming service, but not upgrade the computer’s built-in DAC. Once the proper streaming resolution was set with the Audio MIDI Setup app, the Fiio obliterated Apple’s built-in DAC.

It’s worth thinking about whether you want to carry a DAC for your phone; but if you’re plugging headphones into a Mac–or a PC–there’s zero reason why you shouldn’t improve your life with the Fiio KA1.

Apple’s built-in DAC is more than okay. If you’re not listening to sources that are at least CD quality—including Spotify—you might not notice the difference between the adapter and a DAC. If you’re subscribing to Apple Music, Tidal, or Qobuz, a DAC can make a substantial difference in your experience. All the top music-streaming services are compared at the preceding link.

The Fiio KA1 is a steal at around $50 ($55 for the Lightning version). If you have good, wired headphones and you’re on a budget, it’s an excellent option. Is it as good as significantly more expensive choices like the iFi GO Bar, the AudioQuest Dragonfly series, or the previously mentioned Questyle M15? No, but the KA1’s performance is at least worthy of comparison to those devices.

A good DAC helps deliver more musical, less fatiguing listening sessions. The Fiio KA1 paired with a classic headphone like the Sony MDR-7506 and used with a CD-quality-or-better streaming service offers a great introduction to the world of Hi-Res audio. There are other DACs that allow you to swap cables between Lightning and USB-C, but most of them cost more than two KA1 DACs. If you’re looking to use both an iPhone and a laptop, consider buying one of each.