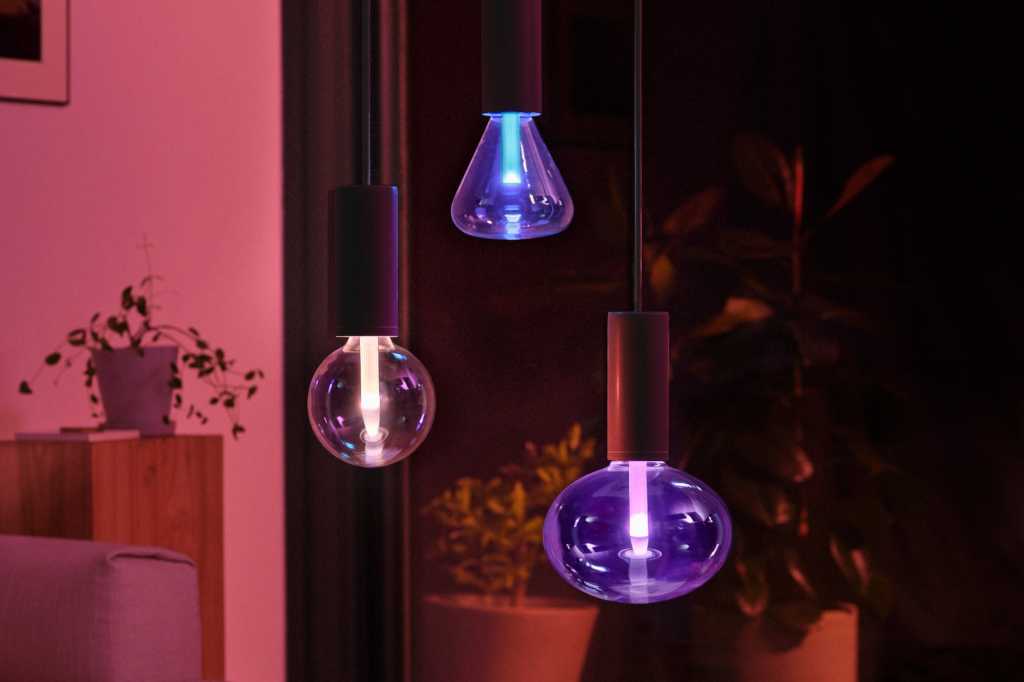 Signify-owned Philips Hue is showing off a range of eye-catching smart lights at IFA 2022 in Berlin, including transparent, globe-style bulbs with glowing interior tubes, as well as a new gradient light strip designed for PC monitors.

The smart light brand also unveiled a tunable version of its filament candle bulb, a super-slim downlight, and a “mimic presence” automation that’s intended to deter would-be trespassers when you’re away from home.

Finally, your Hue lights will soon be able to sync with any streaming music service, but there’s a catch (click that link to read more).

One of Philips Hue’s more striking designs in recent years, the new Lightguide bulbs come in globe, ellipse, and triangular shapes, and they feature interior tubes (made of optical-grade polycarbonate) that “diffuse” light in practically any color, while a reflective coating amplifies the effect.

The 500-lumen Lightguide bulbs come with a E26 base for screwing into a standard light socket. You can also match the bulb with a “specifically designed” pendant cord and metal holder, which will be available in both black and white.

Set to go on sale September 13, the Hue Play gradient lightstrip for PC attaches to the back of your monitor using a series of included peel-and-stick brackets, while the 45-degree sleeve design casts a “halo” effect when the back of the screen is near a wall.

As with the existing Philips Hue Play light bars, which can also sync with a PC monitor, the Hue Play gradient lightstrip for PC is designed to create eye-popping light shows when you’re playing games.

That said, it’s worth noting that the Hue Sync desktop app won’t work with DRM-protected sources such as Netflix; to sync Hue lights with streaming content, you’ll be better off with the Philips Hue Play HDMI Sync Box.

In a related development, Hue announced an integration for the iCUE app from PC component maker Corsair, which will allow gamers to sync their Hue lights with Corsair’s RGB-lit PC cases, RAM modules, and other accessories. That integration is available now.

It’s also worth noting that the standalone Hue Sync app for mobile is being “phased out,” and its functions will be incorporated into the Sync tab of the main Hue app.

Philips Hue already offers a series of dimmable filament candle bulbs, but the brand is now unveiling a White ambience version of the bulb that’s not just dimmable, but also tunable.

Designed to fit in rooms with thin false ceilings, the new Hue slim downlight is just three-quarters-of-an-inch thick, and it can be installed without a can. The downlight can be affixed to a junction box using a pair of flexible grip arms.

Like the aforementioned Lightguides, the Hue slim downlight is color-capable, and it can cast up to 1,200 lumens of light. It’s also dimmable all the way down to 0.2 percent of that value.

The Hue slim downlight is slated to arrive September 1 for $69.99.

A long-missing feature for the Hue app is an “away” mode, which can trick interlopers into thinking you’re home by turning your lights on and off at random intervals.

Hue is looking to bridge the gap with its new “mimic presence” feature, which will light and douse your lights “just as usual” when you’re away.

The feature will live in the “Automations” tab of the Hue app, and it will allow you to pick which scenes, rooms, and lights will get the “mimic presence” treatment.

You won’t need to turn off existing automations to use the mimic presence feature; instead, the feature can run “on top” of any automations you already have enabled.

The mimic presence feature should roll out later this month, Hue reps said.