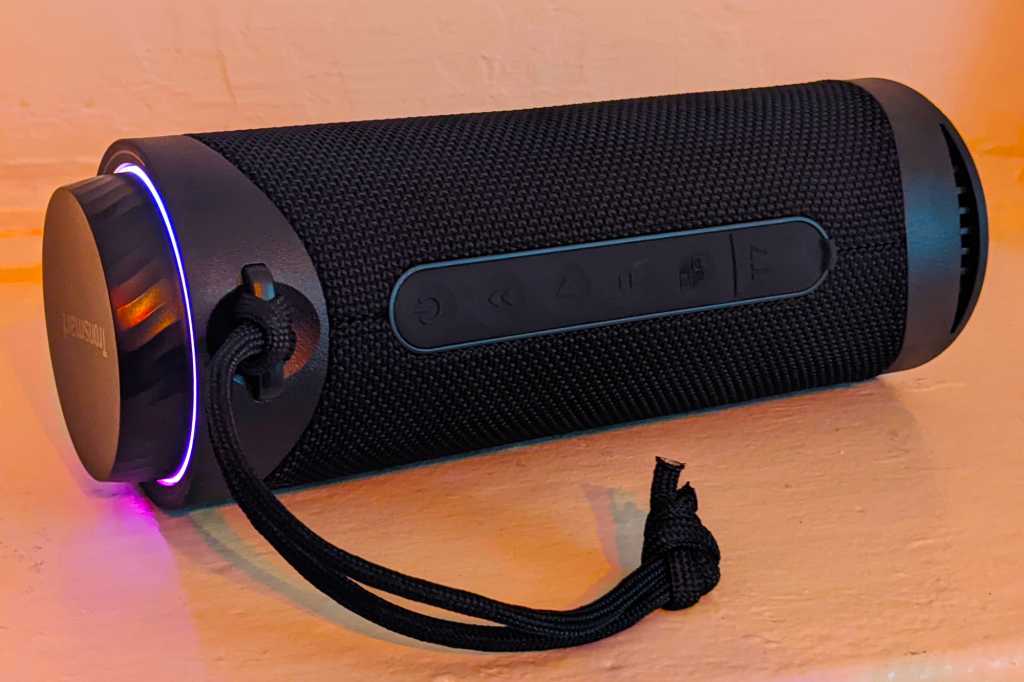 The Tronsmart T7 looks good, sounds good, will stand up to a bath, and is affordable enough to deploy in stereo pairs.

I now think of the Tronsmart T7, and the numerous similarly designed Bluetooth speakers, as canister types. You heard it here first, and the name fits. My extreme creative prowess aside, the $60 T7 stands out from that crowd by virtue of its sweet combination of affordability, weatherproofing, attractive design, good sound, and entertaining–albeit modest–light show.

It also has the ability to function with a second T7 as a pretty darn good-sounding stereo system that–at $120 for two–won’t break the bank.

This review is part of TechHive’s in-depth coverage of Bluetooth speakers.

How is the Tronsmart T7 designed?

The Tronsmart T7 is a black “sound canister” measuring approximately 8.5-inches long and 3-inches in diameter, weighing in at just under 2 pounds. The unit is meant to sit on its end cap with its large rotary knob facing up; said knob controls the volume.

A light ring surrounding the volume knob provides visual feedback on the charge and Bluetooth status. It then serves as the aforementioned light show while your tunes are playing.

(Note: none of these images show the speaker’s proper upright orientation, but that’s artistic license to reduce useless white space around the photos. Yup, creativity again.)

There’s a lanyard capture point–and a lanyard–on the cylinder’s face, as well as the power, previous, play, next, and S/P (EQ setting/TWS pairing) buttons. Most of the buttons serve more than one purpose, with both long clicks and button combinations employed for playback, phone-call control, and other tasks.

The bottom inch of the rubberized button strip serves as a captive plug covering the USB-C charging port (a USB-A to USB-C cable is in the box) and a microSD card slot. Don’t try to pull past the demarcation line–the rest of the strip is not removable. It should also be left closed if you intend to take advantage of its IPX7 weatherization, which means it can be submerged in up to one meter of water for up to 30 minutes. You’ll find everything you need to know about IP codes at the preceding link. Note that Tronsmart makes no promises about the incursion of particulate matter.

Support for microSD cards lets you to use your own creativity when it comes to playlists based on your own music collection, and it neatly avoids any Bluetooth connectivity issues (it’s based on Bluetooth 5.3). This feature also leaves your phone free for other uses, so your parties don’t get interrupted by phone calls.

How did the Tronsmart T7 perform?

To my ears, the 30-watt Tronsmart T7 sounds just as good, if not a bit better than the name-brand competition. There’s plenty of bass, although sub-bass was transmitted more through the materials it was resting on than the speaker itself. That’s likely due to the unit being ported at the bottom, and not employing the passive radiating diaphragms that many competing units do. This is a design choice, to be sure, and I actually liked the way my acoustically coupled desk took over the job.

The top end is more than adequate, though how much you’ll hear depends a bit on how you orient the speaker. Tronsmart talks about 360-degree sound–and it’s a legit claim for the most part–but it’s actually more like 320 degrees of sameness, as you’ll hear a slight change in the upper registers due to the position of the speaker’s control buttons.

The mid-range was surprisingly well-defined in its upper reaches. I could make out guitar parts better than I can with most Bluetooth speakers. I’d call the lower midrange a bit darker and not quite as well defined. Overall, however, I was impressed for a $60 speaker.

There’s a second EQ setting that seems to feature more emphasis on the midrange. I preferred the default with the mid-range scoop. The second setting might serve better, however, for movie dialog.

Tronsmart doesn’t say what type of drivers are in use, and I wasn’t going to cut one of them open to find out. It could be dual 2-inchers firing in opposite directions from a barrier, or just one near the top, with the canister acting as a giant bass port. It could be something entirely different.

Tronsmart sent me a pair of its T7’s, which was a smart move on their part. As good as the speaker sounds on its own, the sound is even better when paired in stereo. It’s not up there with a good set of bookshelf speakers, mind you, but it’s certainly good enough for around the pool or similar environs.

Claimed battery life is up to 12 hours, depending on what you have the lights doing. I was at about four hours playing with four hours standby and the unit wasn’t finished yet. That’s good enough, in my book.

Note that quick single presses of the power button change the lighting, or turns it off. Yet another omission from the user manual, which only mentions that a double-click will change to microSD card input.

Given its $60 price tag, I was not expecting as much as the Tronsmart T7 delivered. It’s fun, it sounds good, it can stand up to water, and won’t break the bank. Highly recommended–especially in pairs.