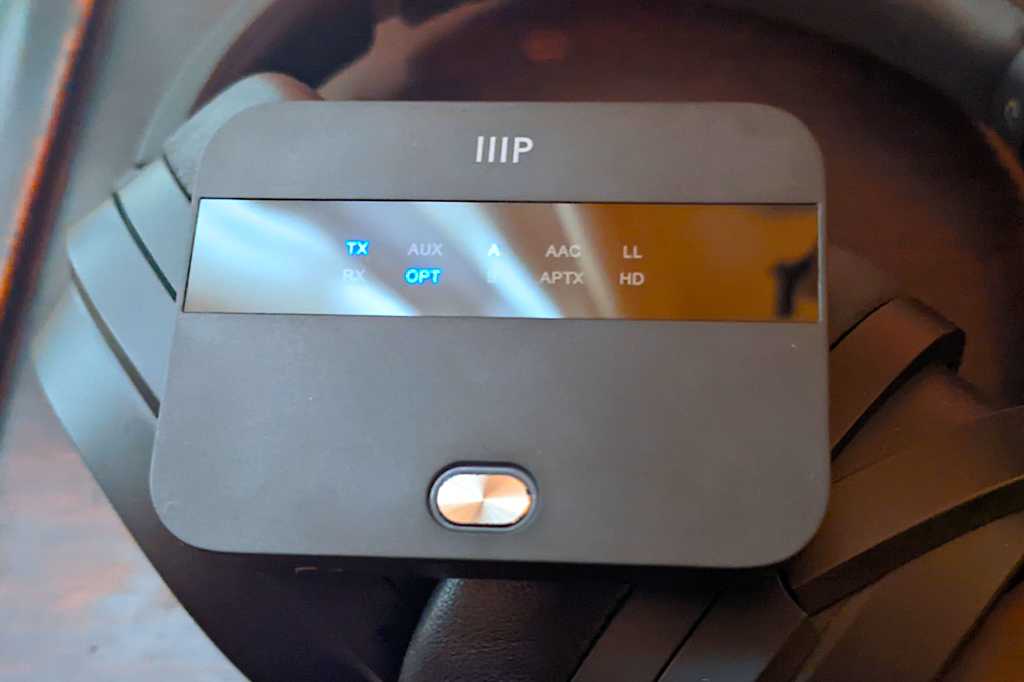 This versatile Bluetooth transceiver is affordable and works like a charm both when transmitting and receiving.

Most external Bluetooth pucks are transmit-only; i.e., they take audio input via cables and pass it along wirelessly. The $40 Monoprice Bluetooth 5 Long Range Transmitter and Receiver does that, but it will also receive Bluetooth audio and output it via cables. Yup, Bluetooth for your legacy audio gear. Even better, there’s a battery on board for use in the wild!

That’s a lot of Bluetooth for the buck, not to mention, a whole lot of moniker. Monoprice doesn’t really do model numbers, but it’s listed as product #43243 on Monoprice’s website, and it and shows up in pairing lists as the MP43243. For the sake of brevity, I’ll just call it the Monoprice Bluetooth 5 transceiver from here on.

The Monoprice Bluetooth 5 transceiver is a smallish, squarish black puck about 2.75-inches wide, 2-inches deep, and about 5/8ths of an inch high. It weighs approximately 1.5 ounces. A substantial amount of that weight can no doubt be attributed part to the 630mAh battery that’s on board.

On the back of the Monoprice Bluetooth 5 transceiver are the S/PDIF input and output, the 3.5mm in/out aux connector, as well as a micro-USB charging connector. That last spec was a bit of a disappointment: Monoprice provides a USB-A-to-micro-USB cable, and while the older micro-USB connectors are perfectly viable and no doubt cheaper than a USB-C connector, I can’t help but think “dated” every time I see one.

Turning the unit to its right side, you’ll find the RX (receive)/ TX (transmit) slide switch (the Monoprice Bluetooth 5 transceiver isn’t duplex; i.e., it can’t transmit and receive at the same time), and the SPDIF/Aux input select slide switch. On top towards the front is a multi-function button that powers on and off as well as deletes previous Bluetooth pairings. It’s circled by an LED that shows the charging status.

Also on top of the Monoprice Bluetooth 5 transceiver are a row of status lights for RX/TX, SPDIF/Aux, as well as for showing which Bluetooth codec is engaged: AAC (receive only), aptX HD, and aptX Low Latency (LL). If none are lit, it’s falling back to the standard Bluetooth SBC.

Lastly, on the front of the unit, is the Bluetooth pair button. This is also used to switch to/from AptX HD (if it’s available) via a very long (7 seconds) press. Normally, it will simply connect via this protocol if it’s available.

As mentioned, Monoprice includes a charging cable; however, the company also bundles stereo-RCA-to-3.5mm and optical cables to facilitate any connection without additional purchase. You are, however, on your own for a USB power source to charge its battery.

How did the Monoprice Bluetooth 5 transceiver perform?

I put the Monoprice BT transceiver to work immediately playing tunes transmitted from my phone and iPad to my old-school Onkyo TX-8211 receiver (an incredible sounding, if not overly loud unit). This worked like a charm, although the distance I could travel with the broadcast devices was only about 30 feet.

Despite its full name, the Monoprice Bluetooth 5 transceiver’s range ranks as average compared to other transmitters I’ve tested. Only the aptX Adaptive connections I’ve tried do any better in this environment, and then it’s only a few feet farther before signal breakup. Honestly, I’m rarely more than 10 feet away when I play via Bluetooth, so the whole range thing is a bit of a tempest in a teapot.

Note that the walls in my old-school apartment are plaster over old-school chicken wire over lath, which makes it extremely unfriendly to wireless signals. Think Faraday cage. You’ll fare better outdoors.

I then switched to using it on my TCL Roku TV (Roku only supports its own proprietary wireless audio–to considerable reviewer discontent) for wireless headphone listening. Alas, with most headphones the latency was noticeable. With my one pair of low-latency aptX headphones, lag was barely noticeable.

Latency is one area where external Bluetooth can be less than an ideal solution. Many TVs that feature Bluetooth will actually compensate automatically (or you can tweak this manually in the TV’s settings) for the inherent lag, and media players on computers nearly all have audio-offset settings you can adjust to eliminate said lag.

External Bluetooth transmitters, on the other hand, not having access to the video signal, require a low-latency connection to minimize dialog lag. In other words, don’t buy this for TV use unless your headphones also support aptX Low Latency. The Monoprice Bluetooth 5 transceiver doesn’t support the newer aptX Adaptive codec, which is also low lag.

One area where I did have a few issues, as I do with many Bluetooth devices, was in pairing and changing modes. When I held the power button for 7 seconds to forget pairings, the Monoprice Bluetooth 5 transceiver turned off. It seemed to kill the pairings, but there was no mention of a power-off in the user guide. I found that slightly disconcerting.

Holding the Bluetooth button for 7 seconds to switch aptX HD on and off also turned the unit off for some reason. Ahem. Alas, the latter action only seemed to turn it off, not on. This may have been user error, or turning the headphones off and back on might be required. The latter quite often is required with Bluetooth in my experience. Again, no enlightenment was to be found in the user guide.

Monoprice claims between 19 and 25 hours of battery life depending on which input you use and whether it’s transmitting or receiving. Standby (on but no audio) time is said to be 60 hours, although there was no figure given for the unit simply being switched off. Hopefully, the battery will last a lot longer than 60 hours in that condition. I had the unit connected and turned on for more than 72 hours (the vast majority without signal, albeit connected with headphones) and it was still up and beaming. Shiny.

All in all, the Monoprice Bluetooth 5 transceiver works well, transmitting and receiving with aplomb. Just expect some slight frustrations when changing connections or Bluetooth modes. As noted, this frustration is more about Bluetooth than this particular product.

I had a blast with the Monoprice Bluetooth 5 transceiver. It functions equally efficiently as both a transmitter and receiver. I was pleased if not overwhelmed with its range, but I truly appreciated the battery operation and low latency with the right headset.

Use it to bring your legacy and vintage audio equipment into the brave new world of wireless media like I did, or add Bluetooth to TVs that lack it (use low-latency headphones, please!).