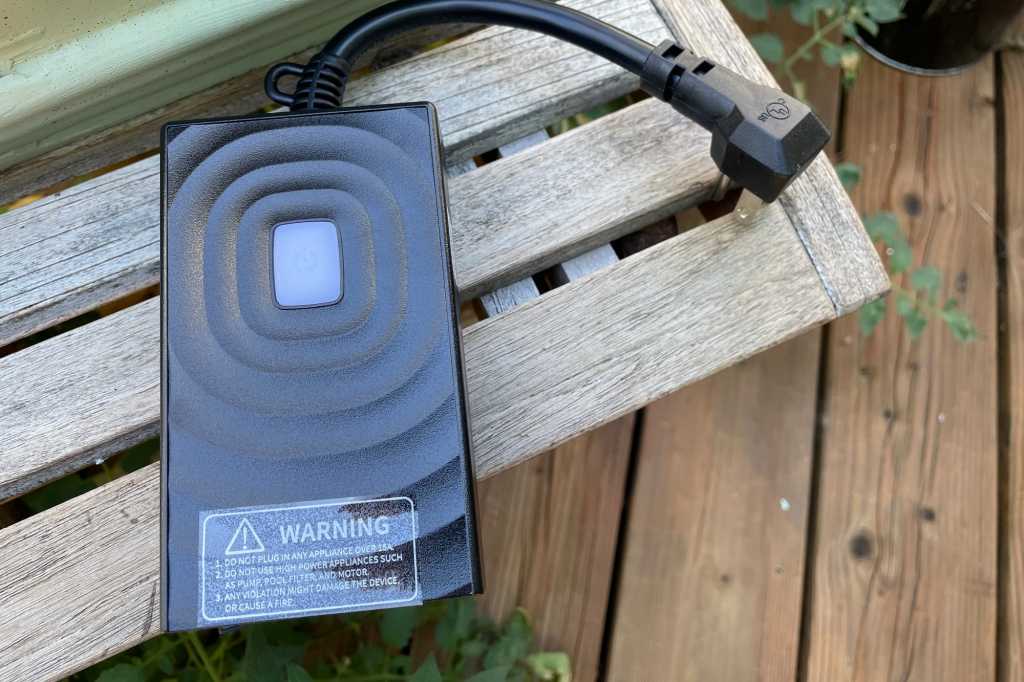 Image: Michael Brown/Foundry
At a glance

We like the price and the broad ecosystem support, but we could do without the quirky app experience and the less-than-robust build quality.

Our experience with Meross smart home products has been a decidedly mixed bag. The company’s low prices are certainly a big attraction, and its products support a wide variety of smart home ecosystems, including Amazon Alexa, Google Assistant, Samsung SmartThings, and—importantly for iPhone users—Apple’s HomeKit ecosystem. That last feature gives it a leg up on the Wyze Plug Outdoor, our current top pick in budget-priced outdoor smart plugs.

This review is part of TechHive’s in-depth coverage of smart plugs.

On the other side of the scale, Meross’ exceedingly basic app wastes precious real estate on buttons that link to its user forums and e-commerce site.

Don’t confuse this model with the slightly different MSS620B we first reviewed in November, 2020. It’s still available—and for less money—but the Amazon listing says it’s not HomeKit compatible, which is odd because it was HomeKit compatible when we reviewed it. Odder still, Meross’ own website—at least as of this writing—indicates that it is. That kind of confused messaging tends to give us pause.

Is the Meross MSS6220 easy to install?

As if to make up for that slipshod messaging, Meross provides two well written user manuals in the box: one for HomeKit users and one for everyone else. As the HomeKit manual concludes, however, HomeKit users will want to install the Meross app as well, if for no other reason than to be informed when new firmware becomes available for the plug. For everyone else, the Meross app is also required to use Alexa or Google Assistant to control the plug.

As an iPhone user, I’m becoming increasingly fond of HomeKit. The Meross outdoor smart plug doesn’t support Thread, but getting it on my network was a simple matter of launching the Home app, choosing the “room” in which I wanted to install the plug (Backyard, in this case), clicking the plus sign to add an accessory, and scanning the QR code on the plug itself. While the plug can connect only to 2.4GHz Wi-Fi networks, HomeKit had no trouble connecting it to the correct network on my dual-band Ring Alarm Pro’s integrated router. Even better, I didn’t need to provide my Wi-Fi password.

With those initial steps accomplished, I installed the Meross app and performed a similar set of steps—although without the benefit of a QR code—to add the device so I could control it with Alexa (or Google Assistant) in addition to Siri. While exploring the app’s settings, I noticed that the plug was reporting very weak Wi-Fi reception–39 percent—with a warning that this would “probably cause frequent disconnection.” This was surprising, because I have an Eero access point installed inside the house right next to the wall where the Meross MSS620 is plugged in.

That got me to wondering what would happen if I moved the plug further away, so I plugged it into an outdoor outlet at the front of my house. I have a second Eero node plugged into my kitchen, which is about 12 feet from that plug (I have a very small house). This time, the Meross app reported Wi-Fi signal strength at 100 percent. Mysteriously, the app reported the same signal strength when I returned the outlet to its original location in the backyard. I’ll chalk it up to an anomaly with the Meross app, because I never had any trouble controlling the smart plug with Alexa, Siri, or the app.

What features does the Meross outdoor smart plug offer?

As mentioned earlier, the two outlets—labeled 1 and 2—on the Meross MSS620 can be controlled independently with the app or with voice commands if you’ve linked them to smart speakers. Pressing the membrane switch on the front of the device, however, turns on both outlets. Left and right LEDs behind this switch glow green to indicate which outlets are on. In the Meross app, the outlets are labeled Switch 1 and Switch 2, but you can easily change those names to reflect what’s plugged into them. You can also change the name of the MSS620 itself. You can use any of these new names in your voice commands.

The Meross app has two basic smart home features: Scenes and Routines. Scenes will turn multiple Meross devices on or off at the same time, and you can program the MSS620’s two outlets independently. Interestingly, you can execute a scene from the app even if you don’t have internet access. You will need internet access to run scenes with voice commands, of course, because of the need for cloud-to-cloud communication. I set up a “Party” scene that would turn on Outlet 1 on the Meross outlet, and Alexa did just that when I said “Alexa, turn on Party scene.” But when I said “Alexa, turn off Party scene” to shut the smart plug down, Alexa responded “Party scene doesn’t support that.”

I didn’t find Scenes to be very useful unless I used them in conjunction with Routines, which can turn Meross devices on or off on a schedule. That’s because you can set a timer that shuts a device off after a defined number of minutes has elapsed. I tried this in concert with a Scene and a Routine and it worked as expected. Here again, you can program the MSS620’s two outlets independently.

How does the Meross MSS620 compare to the competition?

The MSS620 has captive covers for each of its outlets, but it doesn’t feel as well built as some other outdoor smart plugs we’ve tested. It weighs just 8.4 ounces, where our Ring Outdoor Smart Plug review, for instance, reports that the device weighs 14.4 ounces. This might be why Meross assigns its outdoor smart plug with a weatherization rating of IP44, which means it’s only protected against ingress from relatively large objects (larger than 0.04 inches) and that it can withstand being splashed with water, but that you shouldn’t direct a hose at it. Ring rates its product as IP66 when not in use and IP64 when it is, so it’s much better protected from water—at least while it’s not in use—and it’s always better protected from particulate matter. IP codes are explained in-depth at the preceding link.

Both the Meross and Ring smart plugs are rated for 15-amp loads, but Meross warns against plugging a pump into its product, where Ring says its device will support up to 1/2-horsepower motors (Meross does say fans and space heaters are OK). While I’m comparing Meross’ product to Ring’s, I should also point out that you’ll need a Ring Bridge to connect any Ring Smart Lighting device to your Wi-Fi network, and that Ring products are not HomeKit compatible today.

Meanwhile, our Wyze Plug Outdoor review reports that the $18 Wi-Fi smart plug isn’t HomeKit compatible either, but its two outlets can be controlled independently and it’s also rated IP64. It’s the only one of these three products to be outfitted a photocell, however, which enables it to turn on and off based on the level of ambient light. Unlike the other two, the Wyze product can track the energy consumption of the loads plugged into it.

Meross arguably has the strongest smart lighting roundup of these three companies, since it offers everything from in-wall switches and dimmers to lighting strips and light bulbs to smart surge protectors. But we’ve found some of its products to be better than others.

Should you buy the Meross MSS620 outdoor smart plug?

There’s nothing inherently bad about the Meross MSS620 outdoor smart plug, but it’s not a particularly outstanding product either. It’s well priced and HomeKit support is a key selling point, but the build quality doesn’t inspire confidence that it will go the distance. If you already have or intend to purchase a lot of other Meross smart home products, on the other hand, staying in that ecosystem helps you avoid the necessity of installing another app on your smartphone.