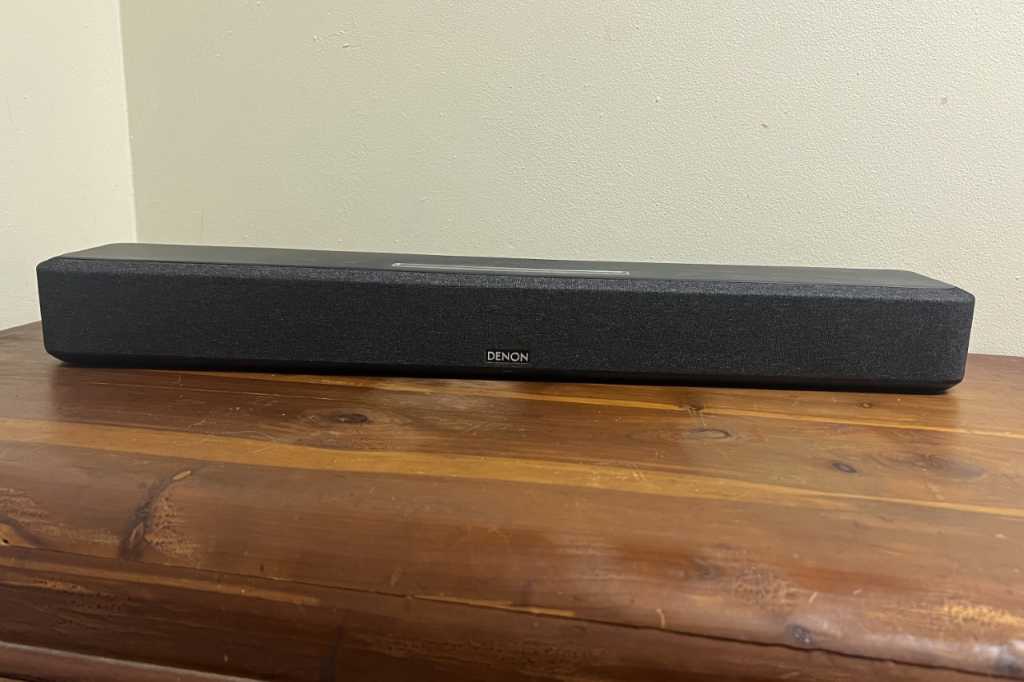 The Denon Home 550 delivers fantastic audio quality, but it might be better for music playback than for home theater buffs.

Denon aims to deliver a full-featured soundbar in a compact and unobtrusive package with its all-in-one Denon Home 550. It’s designed to work with the company’s HEOS multi-room audio platform, which means you can upgrade the soundbar with other Denon HEOS speakers as well as use it in whole-home HEOS speaker setups.

Movie watchers will appreciate that the all-in-one Denon 550 can process both Dolby Atmos and DTS:X audio, the two major object-based 3D audio formats. The 4.0-channel soundbar can also play back hi-res audio.

We tested the Denon Home 550 by itself, as well as alongside the optional Denon Home Subwoofer ($599) and a pair of Denon Home 150 small speakers ($498) to create a true surround system.

This review is part of TechHive’s in-depth coverage of the best soundbars.

How big is the Denon 550 soundbar?

The Denon Home 550 is relatively compact, measuring 25.95 x 2.95 x 4.72 inches (WxHxD) and weighs in at 7.3 pounds. It looks tiny when placed underneath a 55-inch or larger television. The front of the unit is wrapped in gray fabric that gives it a more elegant look than many other soundbars that have plastic speaker grilles.

The Home 550 has a six-speaker array, including two 19mm tweeters and four 55mm full-range drivers, while a trio of 55 x 90mm passive radiators help to shore up the low end.

It’s worth noting that there’s no dedicated driver for the center channel; instead, audio from the left and right drivers combine to create a “phantom” center channel.

Likewise, the Denon Home 550 lacks upfiring drivers for bouncing Dolby Atmos or DTS:X height cues off the ceiling; instead, height effects are achieved via virtualization, an increasingly common method that’s become more and more effective over the years.

The soundbar comes with an IR remote, an HDMI cable, a 3.5mm audio cable, an optical cable, and a paper template to use if you’re mounting the Denon Home 550 on a wall. The rear of the unit has one HDMI input, one HDMI output that supports eARC and ARC, one optical (Toslink) input, a 3.5mm audio input, an ethernet port, and a USB input for playback from a drive.

What are the audio settings for the Denon Home 550 soundbar?

In addition to its Dolby Atmos and DTS:X audio capabilities, the Denon Home 550 has a Dialog Enhancer mode with three levels of compression, while Night Mode smooths out highs and lows for after-dark viewing sessions.

The Denon Home 550 has a control panel on the top with motion-sensitive touch controls that light up when you wave your hand over them. There are buttons for mute, play/pause, and volume up/down, while a fifth button lets you adjust the dialog enhancement level.

Most users will prefer to use Denon’s HEOS app for iOS or Android, which allows for more detailed control of the unit. You can select your sound mode, as well as change the input if you have multiple devices connected to the soundbar. There’s also a Sound Options panel that allows for EQ (treble and bass only) and subwoofer adjustments.

Once you’ve adjusted the settings to your liking, you can press and hold the Quick Select buttons to save presets for future use.

There’s a wide variety of music and radio services built into the app, including Pandora, Spotify, TuneIn Radio, Amazon Music, Deezer, Napster, iHeart Radio, SiriusXM, SoundCloud, Tidal, and Rhapsody. Spotify uses Spotify Connect for playback, while the others allow for some control within the app. Amazon Music supports hi-res audio playback (up to 24-bit/192kHz) via the HEOS app, while Tidal (which depends on the MQA codec for hi-res playback support) is restricted to CD-quality on HEOS.

How is the Denon Home 550’s Dolby Atmos performance?

After choosing the Dolby Surround (Movie) setting in the HEOS app’s Sound Mode, I streamed the spectacular “Darkstar” sequence from Top Gun: Maverick on iTunes. This version is mixed for Dolby Atmos and, as I’ve seen the movie enough times in various theatrical formats, I can attest that the Denon Home 550 paired with the Home Sub and Home 150 speakers reproduced the scene’s sonic detail in impressive fashion.

Remove the Home 150 rear speakers from the equation and the “Darkstar” experience still impresses. If you don’t want the extra speakers in your living room, you’ll still get an excellent experience with just the subwoofer. Lose the subwoofer, though, and the sound won’t be as defined as you might expect from a speaker in this price range.

The quality of the audio reproduction is excellent, but the Denon 550 isn’t nearly as loud as many other soundbars and, while its simulated surround sound definitely delivers when used with a sub and rear speakers, you’re not going to get as immersive a movie watching experience as you’d get with Denon’s own entry-level, Dolby Atmos-enabled DHT-S217 when it’s paired with a subwoofer.

The Denon Home 550 objectively sounds better than its less expensive counterpart, but you’re getting a more restrained presentation that really shines when you start using the 550 as a music speaker.

How does the Denon Home 550 perform with music?

The Denon 550 soundbar is the latest entry in the company’s HEOS speaker line designed to directly compete with market leader Sonos. Music playback is a real strength for the 550, and Denon’s HEOS app for iOS and Android is critical to the experience.

I played Muse’s 2022 album Will of the People through Tidal via the HEOS app. I have the Hi-Fi Plus subscription, which usually gives access to the service’s MQA hi-res streaming codec. Alas, the Denon Home 550 is limited to CD quality through Tidal, given that the HEOS app doesn’t support MQA.

However, playing the same Muse tracks via Spotify Connect was an instructive experience. Spotify still doesn’t offer CD or better-quality streaming, and the Spotify version of the track didn’t sound nearly as detailed as the Tidal stream. The excellent quality of the Denon Home 550 speaker really exposes the gap between Spotify and its higher-resolution competition.

Denon touts the speaker’s ability to play back high-res PCM-based files up to 24-bit/192kHz and DSD files up to 5.6 MHz, which requires a home network server or a USB stick plugged into the system.

Does the Denon Home 550 soundbar support Bluetooth and Wi-Fi casting?

Considering that you can play back audio via HDMI with apps on your streaming device or via most of those same apps with Wi-Fi, it’s unlikely that you’ll need to use Bluetooth with the Denon 550.

If you do, realize that you’re limited to the default SBC Bluetooth codec, as there’s no support for the hi-res aptX or LDAC codecs.

A better casting option is AirPlay 2, good for streaming up to CD-quality audio to the soundbar from an Apple device.

Does the Denon Home 550 work with Alexa?

The Denon Home 550 boasts built-in Alexa, which means it can do pretty much everything one of Amazon’s Echo speakers can do. I used Alexa on the 550 to check sports scores and the weather, as well as to play some tunes from Amazon Music.

If you’re an Echo user, you know about the pulsating light Amazon’s speakers use to alert you about messages. That includes updates about the delivery status of packages and shopping suggestions from Amazon. For better or worse, activating Alexa on the Denon 550 brings that same capability to your soundbar. If you’ve got a package out for delivery, the soundbar will start glowing when you’re in the middle of watching a movie.

Of course, it’s possible to go into the Alexa app on your phone and turn off any notifications that you don’t want. If you do want delivery notifications on any of your Alexa devices, you’ll have to live with the occasional glowing light on the 550 if you want to activate Alexa there.

Is the Denon Home 550 worth the cash?

The Denon 550 is an attractive and relatively small soundbar that sounds great alone or when used in a surround setup with other speakers from Denon’s HEOS line. If you’re outfitting a big room as a home theater for watching action movies and sporting events, you might want something capable of more volume.

Not everyone wants the flash and thunder in their living room. If you’re looking for a versatile soundbar that plays music even better than television or movies and doesn’t dominate the view in your home setup, the Denon 550 soundbar would be an excellent choice.