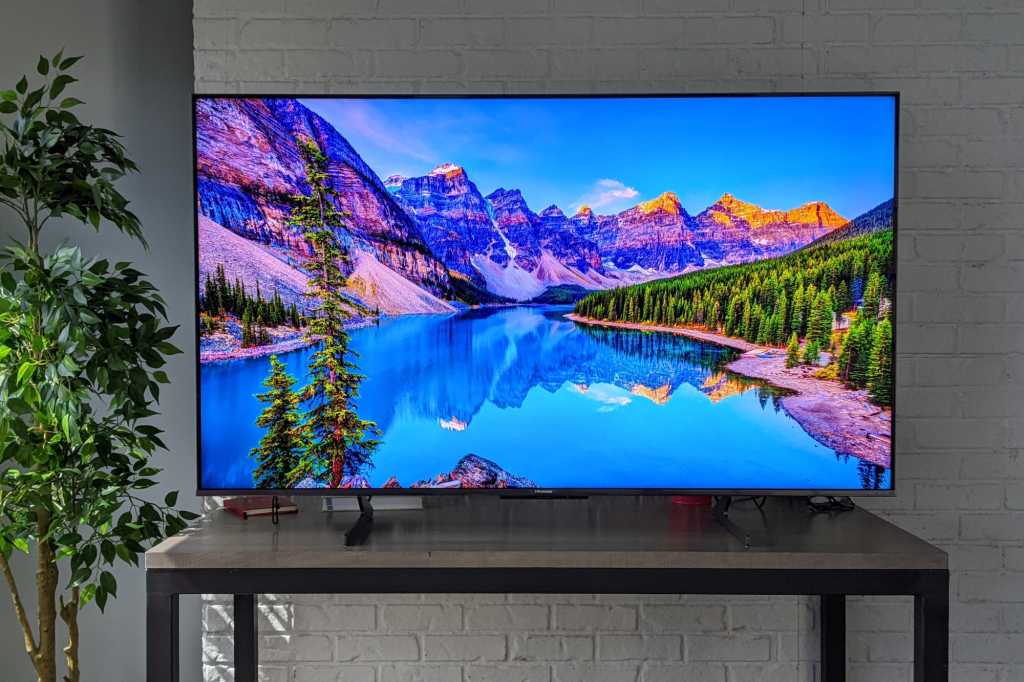 Hisense’s U8H impressed us with its rich quantum dot color and mini-LED backlighting. It produces offers some of the best blacks we’ve seen from an LCD TV. Video processing and motion handling, on the other hand, aren’t quite as strong.

Mini-LED backlighting in the new Hisense U8H-series smart TVs has resulted in a quantum leap in black-level performance for the company, rivaling the best implementations of the granular backlighting technology we’ve seen.

Processing of motion and pans when fine detail was in play wasn’t quite a strong, but it did improve with a firmware update that rolled out during our testing.

This review is part of TechHive’s in-depth coverage of the best smart TVs.

Tell me about the Hisense U8H’s design and feature set

Hisense claims 500-plus local dimming zones, but that might sell this 65-inch model short: The zone counter we use revealed a roughly 40 x 40 grid, or somewhere around 1,600 zones. Whatever the actual number, it’s large and it explains the lack of backlighting artifacts we observed. More on that below.

Our unit weighed in at roughly 58 pounds and measured 3 inches deep at its thickest point. The 65-inch U8H will wall-mount nicely using lits 400 x 400mm VESA mount point (this differs according to model size), although the display won’t be as flush with the wall as some competitors.

There are two locations for each leg–inboard and outboard–to accommodate different width platforms you might set the unit on.

The Hisense U8H’s array of ports (shown above) includes four HDMI types, two of which support 120Hz refresh rate; two USB ports; a 3.5mm composite/analog audio combo input (an adapter cable is required), a 3.5mm headphone jack, optical S/PDIF output, and an ethernet port. There’s also a Wi-Fi 6E adapter onboard, which will take advantage of the latest and greatest wireless routers than support newly opened 6GHz spectrum in addition to 2.4- and 5GHz.

The operating system being Google TV, there’s of course support that company’s assistant, as well as Alexa. Variable refresh rate (VRR) and FreeSync premium are supported for tear-free gaming,

Which operating system does the Hisense U8H use?

The Hisense U8H uses the Google TV operating system, which is vastly improved from the crash-fest it was a few years back. The OS delivers tons of apps and content, and is of course joined at the hip with Android for screen mirroring and the like.

I was a bit disappointed in the settings menu, which covers the entire screen until you get to the actual settings you want. The picture then reappears, so you can track changes as you invoke them. It could be a little less jolting, but it gets the job done. And unlike Samsung’s Smart Hub, there are minimal clicks required to accomplish tasks. Less is more, I say!

The remote is serviceable, if a bit of a tease. I was thinking that the white rocker and home button would be photo-luminescent; they’re not. But being white on black, they’re still a bit easier to pick out by the light of the TV itself than the common black-on-black, or white-on-white color schemes. Backlit buttons, of course, would be even better.

The remote meshes well with Google TV, and the button locations make them easy to memorize and reach. I could do without the advertising shortcut buttons, but there seems to be no way around those these days.

Google TV, Hisense’s remote, and the Hisense U8H itself combine to deliver a top-notch navigation and content experience. That said, I still rank experience a notch below the Roku OS (which has its own issues) and LG’s WebOS in terms of general efficiency.

Does the Hisense U8H deliver a good picture? How about and sound?

What jumped out immediately to those of use viewing the Hisense U8H was how deep its blacks were, and how negligible the blooming was. We’re not talking OLED-quality blacks, but the absence of halos and the like was truly impressive. Even the background of a starfield in motion was decently dark.

There’s no secret really. As mentioned, we counted around 40 zones horizontally and vertically on the U8H which gives you about 1,600 zones in all. Quite a few TVs tout mini-LED backlighting these days, but they don’t get the same effect because they don’t have enough zones. Are you listening, Samsung?

The Hisense U8H’s color is also outstanding, thanks to a layer of quantum dots in front of the backlight. Filmmaker Mode showed very accurate renditions of the artist’s intent, and we could saturate to our heart’s content without experiencing color-skewing.

We saw a lot of judder and jerky pans when we first watched the Hisense U8H. A subsequent firmware update improved motion drastically, and when set to “smooth,” nearly all the judder disappeared. Nearly all. There was still the occasional jump in pans of large detailed areas.

That firmware update didn’t fix the greater-than-average shimmer and moiré we observed in areas of finely detailed HDR patterns. Not a whole lot of material was affected by this, but what there was was irritating. I speculate that some of the shimmer and moiré is due to Hisense using 8-bit + FRC (Frame Rate Control) to display one billion colors instead of 10-bit processing. A 10-bit panel can display 1,024 shades of color per channel: Red, green, and blue (1,204 x 1,204 x 1,204 = 1.07 billion). An 8-bit panel can only produce 256 shades of color per channel (256 x 256 x 256 = 16.7 million colors). To get around this, an 8-bit + FRC panel displays two colors over two adjacent frames to trick your eye into seeing a color that the panel wouldn’t otherwise be able to produce with 8 bits of data. A high refresh rate masks the flickering that would otherwise result from this technique. I’ve seen only a few 8-bit + FRC panels to date, so I can’t say for certain that that’s the cause of the shimmer and moiré.

Despite the artifacts described above, we were extremely impressed with the Hisense U8H’s picture and everyday viewing prowess. The mini-LED backlighting makes for an extreme uptick in the blacks and contrast compared to last year’s Hisense U8G and to most of the LCD competition.

The Hisense U8H’s audio performance was also a surprise: It’s well-balanced and even delivered a low-frequency component (bass) that few thin TVs can. That 3-inch thickness does offer advantages.

The Hisense U8H is a very good TV

The Hisense U8H’s color and black performance makes it a top-tier LCD with a vengeance. It’s also got the bells and whistles both gamers and enthusiasts desire. We might wish for a little less shimmer and moiré, but that affects a distinct minority of material. It’s a very, very good TV for the price.