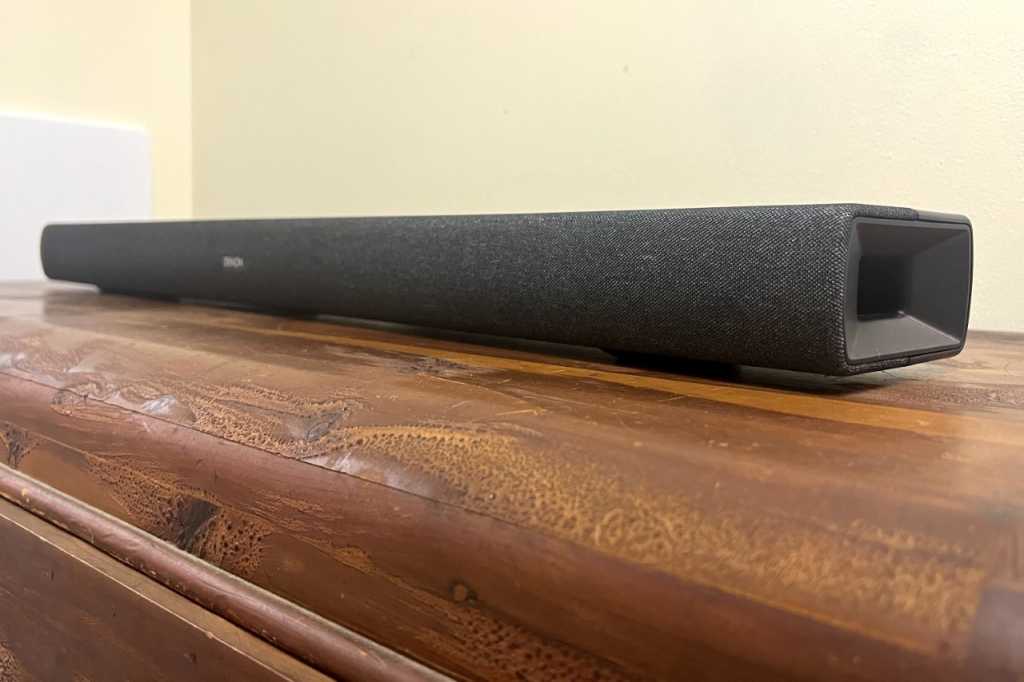 The DHT-S217 soundbar’s Dolby Atmos support makes it a perfect choice for streamers who want a low-profile, all-in-one audio option.

A follow-up to its well received DHT-S216H all-in-one soundbar, Denon’s upgraded DHT-S217 keeps the same design as the older model but swaps out DTS Virtual:X support for Dolby Atmos. Since so much 4K streaming content now comes with Dolby Atmos sound, the DHT-S217 should appeal to users who get most of their home entertainment from a Roku player or Apple TV.

Some audio manufacturers cram as many features as they can into their soundbars, aiming for a lengthy list of bold-faced features. But with the DHT-S216H, Denon wisely skipped the extras in favor of delivering great virtualized Dolby Atmos sound at a reasonable price. Among the extras that got ditched are the likes of Alexa and Google Assistant, as well as Wi-Fi capability and the AirPlay 2 and/or Chromecast support that could have come with it.

If you’re looking for a low-profile, easy-to-operate way to add a Dolby Atmos experience to your television setup, the Denon DHT-S217 offers a great experience. You can add a more traditional floor subwoofer if you’re so inclined, and this soundbar offers a variety of listening modes that keep things quieter for night viewing and enhance dialogue for anyone having trouble hearing what’s going on.

This review is part of TechHive’s in-depth coverage of the best soundbars.

How do you set up the Denon DHT-S217 soundbar?

Plug the power cord into the wall and the back of the unit, plug the included HDMI cable into an ARC or eARC port (the latter allows for lossless Dolby TrueHD or multichannel PCM audio from a Blu-ray player) on your television and into the back of the soundbar, and turn on the TV. That’s it. All you have to do going forward is figure out which sound modes you prefer to use in different situations.

That process will work for most users, but Denon has built some flexibility into the unit for buyers who have yet to upgrade to HDMI by offering an optical Toslink input (and included cable) and a 3.5mm aux jack. You won’t be able to enjoy the Dolby Atmos experience via optical or aux, but you will get an excellent stereo soundbar experience.

For HDMI users who don’t have ARC or eARC, there’s a second HDMI input that allows you to plug your source directly into the soundbar for full Dolby Atmos or Dolby TrueHD audio experience. The DHT-S217 can pass through Dolby Vision and 4K HDR video to your television.

How many drivers are built into the Denon DHT-S217?

The DHT-S217 qualifies as a low-profile soundbar, measuring just 35 x 2.6 x 4.7 inches (WxHxD) and weighing in at a little less than 8 pounds. I tested it with a 43-inch 4K television set on a table, and had to place the soundbar a couple of inches in front of the TV to give enough clearance for the TV remote to connect with the television. With a larger screen, the television should have more clearance and that shouldn’t be an issue.

Inside the main soundbar cabinet is a pair of 1-inch front-facing tweeters, a couple of of 3.5 x 1.6-inch rectangular midrange speakers behind a fabric grille, and two surprisingly effective down-firing 3-inch subwoofers.

The DHT-S217 doesn’t come with up-firing drivers that bounce Dolby Atmos height cues off your ceiling; instead, the soundbar uses virtualization to achieve its height effects, as do many other budget-priced and Atmos-enabled soundbars. How well does the Atmos virtualization work? We’ll get to that in a moment.

While the DHT-S217 can’t be upgraded with wireless surround speakers or a wireless sub, it can get a boost from a wired subwoofer thanks to the unit’s analog subwoofer output. That’s a huge plus, given that you can add any wired subwoofer with a wired RCA connection, rather than being tied to the wireless (and often expensive) sub offered by the manufacturer.

I don’t think adding a subwoofer to the DHT-S217 is a necessity–the built-in subs are, as I just mentioned, surprisingly good–but should you want to, the analog output makes the process easy while allowing for a wide range of options.

What sound modes does the Denon DHT-S217 offer?

Denon delivers four different sound modes and three levels of dialog enhancement, all of which are activated by easy-to-locate buttons on the included remote.

Pure mode delivers audio without any processing, while Movie and Music modes feature tweaks designed for their respective sources.

Night mode is a handy option for those who like to watch TV in bed and don’t want to wake a partner. By compressing the highs and lows, Night mode delivers a consistent volume that’s less likely to wake your housemates.

The three progressively stronger levels of dialog enhancement are a welcome addition for anyone who’s struggling with hearing loss. Even viewers with perfect hearing will appreciate dialog enhancement when confronted with the dense and confusing audio mixes used in some Hollywood blockbusters.

What controls does the Denon DHT-S172 have?

The top of the DHT-S217 has buttons for power, input source, Bluetooth and volume control.

The remote layout is good and it’s easy to control volume and muting by touch, but it would be helpful if the remote was backlit so that users could more easily locate the buttons for inputs and sound modes.

The DHT-S217’s Dolby Atmos experience is remarkably convincing, considering that it’s coming from a single source and without the benefit of upfiring drivers. The DHT-S217 gives a reasonable facsimile of the surround experience without a forest of speakers.

The soundbar excelled with the Atmos mix of the 2018 Queen biopic Bohemian Rhapsody. The scene that recreates the band’s 1985 Wembley Stadium performance at Live Aid poses special challenges, as the camera weaves in and out of the band members onstage as they perform in front of a huge CGI audience. Audience noise should change based on the camera’s position on stage, and the DHT-S217 does a fantastic job of delivering those swells and ebbs of the audience noise.

The 2022 movie Jurassic World Dominion is full of thundering dinosaur sequences, but a particularly challenging scene is the moment when scientist Claire Dearing (Bryce Dallas Howard) encounters a Therirzinosaurus after ejecting from an airplane. The scene is almost perfectly quiet as Claire attempts to sneak past the menacing dinosaur, and the few audible effects are appropriately placed in the sound field.

The DHT-S217 makes for an excellent Bluetooth speaker. If your video source doesn’t feature an app for your favorite audio streaming service, Denon has created an excellent backup option. A paired Bluetooth device (most likely your phone) can wake the Denon to play tunes.

Still, Bluetooth can’t compare with streaming via the HDMI input. Fleetwood Mac’s self-titled 1975 album is available to stream in Dolby Atmos via Apple Music, and streaming it via Apple TV delivers the full surround experience, with songs like “Monday Morning” and “Rhiannon” opening up in an effective spatial audio mix. You only get stereo when streaming with Bluetooth.

Even a stereo-only song like the Flaming Lips’ “Do You Realize??” from the 2002 album Yoshimi Battles the Pink Robots sounds better when played from the Apple TV than when streamed via Bluetooth from an iPhone, with more detail and presence from the guitars.

Just to be clear, the Bluetooth option is certainly good if you really need it, and the DHT-S217 would rate highly as a Bluetooth-only speaker. That said, if you can stream your tunes over HDMI via a music app, you should.

Does the Denon DHT-S217 support DTS?

The Denon DHT-S217 does not support DTS, which will be an issue for Blu-ray fans because so many BD releases have DTS-HD Master Audio soundtracks. Also, no DTS means no DTS:X, a Dolby Atmos competitor that you’ll find on such 4K Blu-ray discs as Apollo 13 and The Fate of the Furious.

Denon likely realizes that the audience for 4K and HD movies has migrated online, and streaming movies deliver their sonics almost exclusively via Dolby Audio and Dolby Atmos–hence, the lack of a DTS decoder.

If you need that DTS support, you can always offload DTS decoding to your TV or Blu-ray player by setting them to output PCM rather than bitstream audio (although doing so won’t help with DTS:X), or simply opt for a soundbar that does offer DTS.

Is the Denon DTS-S217 worth the cash?

With the DTS-S217, Denon has delivered an affordable but impressive Atmos-enabled soundbar that caters to streaming services, although its bargain price tag entails missing out on Wi-Fi and wireless casting support.

If you want an Atmos soundbar that offers upfiring drivers rather than virtualized height effects, the Polk Signa S4 fits the bill for a steeper price ($399, rather than $249 for the Denon).

Finally, if you’re looking for Wi-Fi and casting support from at Atmos soundbar without breaking the bank, we recommend the second-gen Sonos Beam, which won our Editor’s Choice award for mid-range models.