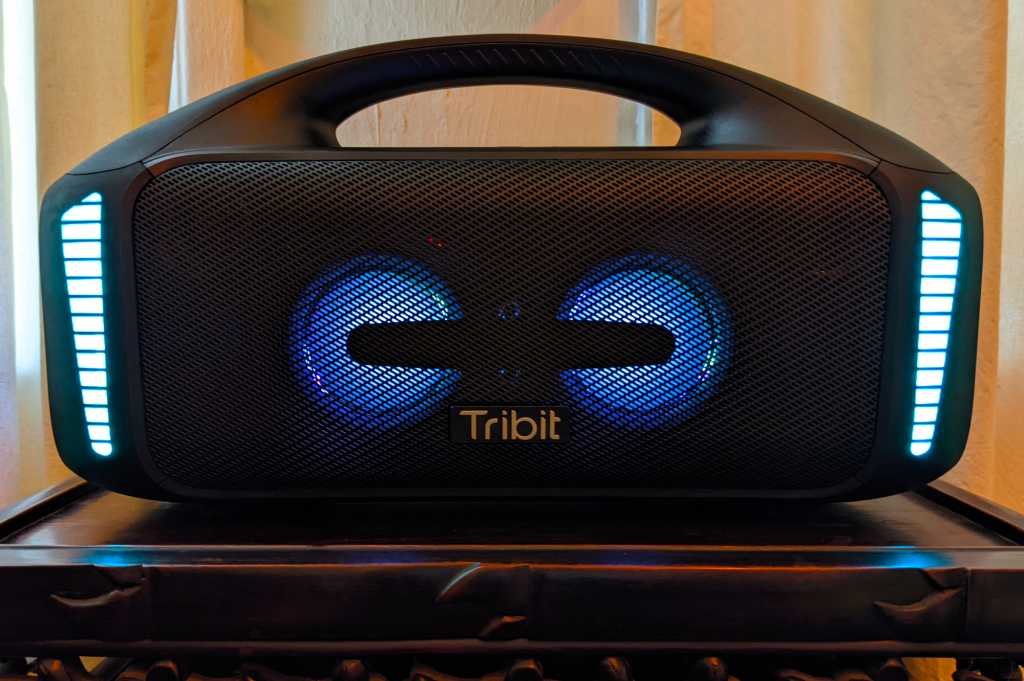 Fun, sonically adept, and ready to take on the great outdoors, Tribit’s StormBox Blast is an affordable Bluetooth speaker than can run with product costing twice as much.

Tribit’s latest device is no dainty backpack speaker. Instead, the Tribit StormBox Blast Blast is meant for partying at the beach or near the pool. And in what is becoming a Tribit tradition, the StormBox Blast competes for best of breed at a lower price point than the competition.

On the minus side, the Blast’s LED light shows have a tendency to drift from the primary beat, and there’s no battery life indicator on the unit itself.

This review is part of TechHive’s in-depth coverage of Bluetooth speakers.

How big and heavy is the Tribit StormBox Blast?

The StormBox Blast weighs in at a substantial 12 pounds and measures roughly 16 x 9 x 6 inches (WxHxD), including the thick plastic handle. That handle is integrated into the body and serves to protect the control buttons underneath it. With the exception of a single seam, the handle is quite comfortable, and it should get you from the parking lot to the beach without digging into your palm or fingers.

Inside the StormBox Blast’s shell are two 4.2-inch woofers and two 1.2-inch tweeters, which are driven to the tune of 60 watts for the larger drivers and 30 watts for the smaller ones, good for 90 watts total.

The Bluetooth is the latest 5.3 specification, and though Tribit didn’t hype low latency, I spent some time watching videos and the lag was minimal, a nice surprise.

The Blast features 32 LED lights: fifteen apiece on two strips framing the front of the unit, and two behind the speaker grille near the woofers. Several visualizations are available, and you can also shut them off if you’re not in a boogie frame of mind.

The aforementioned controls include buttons for power, Bluetooth pairing, volume up and down, multifunction (for play/pause and next/previous), lighting control, and XBass (bass boost). On the back (and protected by a captive rubberized cover) is a 3.5 mm auxiliary-in jack, a USB-C charging port for external devices, and a connector for the included two-pronged AC cable.

The StormBox Blast’s enclosure is IPX7-rated, meaning it’s designed to survive in up to a meter of water for half an hour. While we don’t recommend tossing the Blast into a pool, it should be fine at the beach or outside in the rain. The “X” in the IP rating means it wasn’t tested for particulate matter, but it’s not likely to expire if you drag it around a sandy beach.

How does the Tribit StormBox Blast sound?

I found the Blast’s sonic production to be mostly satisfying. I might opt for just a bit more high-end sparkle if I were designing it, but that’s being picky.

The bass is nicely balanced, but if you want to emphasize that register to get the party going, simply tap the XBass button and you’ll get plenty of thump. There’s also some nicely rendered sub-bass, though it won’t replace your 18-inch trunk monkey any time soon. I quite enjoyed the XBass effect on all genres (I test with classical, rock, hip-hop, and country, among others) and left the setting engaged nearly the whole time.

What did drive me a bit crazy were the LED lights, which sometimes flashed in an apparently arbitrary fashion. Initially, the smarts in the transient (beat) detection seemed to pulse consistently to the main beat, but the LEDs would eventually stray off into backbeats and lesser transients such as vocals.

Fortunately, one of the settings for the lights is “off”, so if the Blast’s flashing lights make you feel like you’re having a bad trip (don’t ask), you can ditch the show. Then again, if you’re a syncopation fanatic, you might love it.

How much battery life does the Tribit StormBox Blast get?

Tribit claims 30 hours of run time from the Blast, courtesy of nine–yes, nine–2,200 mAh batteries. That explains some of the 12 pounds of heft. Of course, your mileage may (and likely will) vary in terms of real-world battery life, and we’ll add our own findings once we complete a full battery-drain test.

Disappointingly, the StormBox Blast lacks a visual battery-life indicator on the unit itself. That said, you can check the speaker’s battery life in your phone’s Bluetooth device list. There’s also a battery icon in the Tribit app, which includes controls for the various lighting and EQ modes.

Is the Tribit StormBox Blast worth the cash?

While I might quibble with the twitchy lighting algorithm and lack of an on-device battery indicator, the Blast is…well, a blast. It’s loud, thumpy, decently balanced, easy to carry, and (pending our battery-drain test) should deliver outstanding battery life. Overall, we’re talking another good-sounding speaker at a nice price from Tribit.