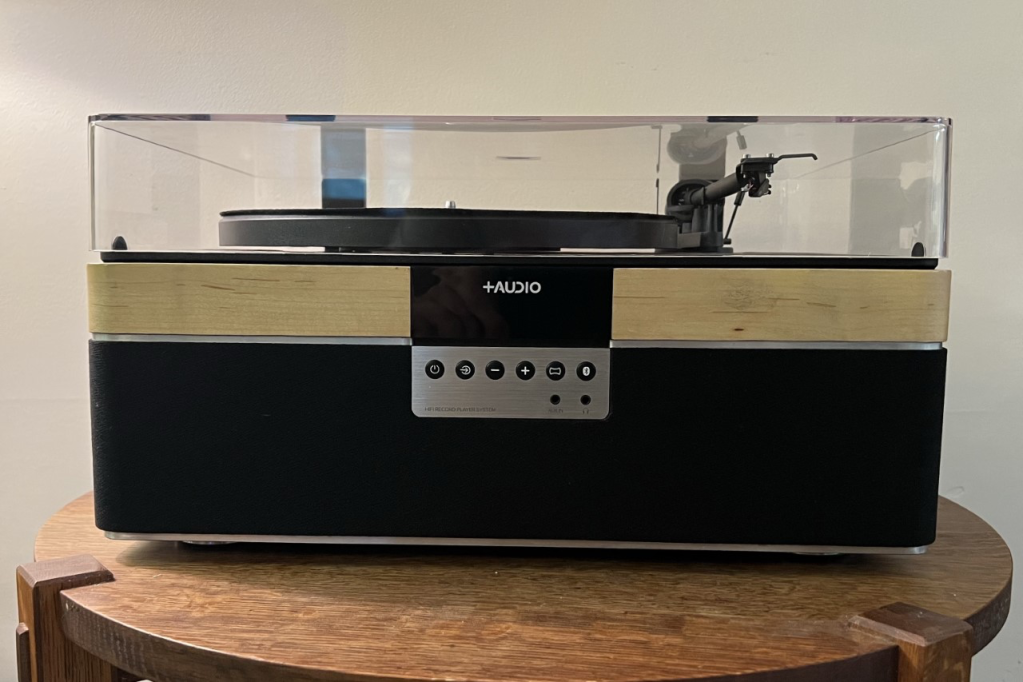 The+Record Player may have a small footprint, but this all-in-one unit delivers spectacular audio that can compete with the sounds from far pricier component systems.

Plus Audio (a.k.a. +Audio) violated the prime directive of audiophile listening when it decided to design an all-in-one unit that places the turntable on top of the speaker. The rules insist that the vibrations from the speaker are going to drift up to the tonearm and mess up the playback. How can a company possibly deliver great sound in this kind of package?

Well, the designers at Plus Audio appear to have circumvented the laws of physics, as The+Record Player delivers a spectacular listening experience despite its unconventional design. There’s plenty of low end and, once you balance the tonearm, the tracking is smooth and steady.

What comes with The+Record Player?

We reviewed the standard $1,799 (ouch) model, which features an aluminum tonearm, a Ortofon OM10 cartridge, and a Pro-Ject Debut III turntable. For $200 more, you can upgrade to the Special Edition, which offers a carbon fiber tonearm, Ortofon 2m Red cartridge, and the Project Carbon CD turntable.

The case is available with either walnut or maple wood accents and measures 17.6 x 13.9 x 8.5 inches (WxDxH, with dust cover). The whole contraption weighs approximately 33 pounds, which is fairly hefty given the unit’s size. There are speakers in the front and speakers on the sides to create a 270-degree sound field.

Active 4-channel Class-D amplification powers two 35W woofers and two 15W tweeters for 100W of total output. Volume maxes out at just over 110 dB. The turntable plinth is isolated from the base, and the Pro-Ject unit features a 24-pole synchronous AC motor and flexible elastomer low-rumble suspension. There’s also a built-in phono preamp.

How do you set up The+Record Player turntable?

The+Record Player comes with a notably well written owner’s manual that includes plenty of images. Before the manual details the setup, it offers illustrations of the front control panel, the remote, and the back panel that clearly explain how the buttons and connections work. It’s the rare manual worth reading before you take gear out of the box.

You should also read the manual if you’re not experienced in setting up turntables. The +Record Player requires that you remove a few screws holding everything in place for shipping. If you’re a U.S. or Canadian customer, it’s a simple process. If you live elsewhere, you’re also going to have to connect the turntable to the speaker base in an additional step.

What are the challenges? You’ll have to install the drive belt, which is an easy task if you’ve done it before but possibly intimidating the first time you try. The real trick comes with setting up the tonearm. Once you slide the counterweight onto the tonearm, you’ll have to locate the position where the tonearm is balanced and floats freely.

The next step is to calibrate the counterweight to zero and rotate it to the proper tracking force, which is 1.8g for the OM10 cartridge included with the review unit. The counterweight has ticks that go from zero to 29 in a circle around the counterweight. If you’ve never set up a turntable before, you might not realize that the position 18 is the one that equals 1.8g. The only flaw in an otherwise flawless manual is the lack of direction on this point, but the company’s setup video on YouTube demonstrates the process if you’re feeling a little unsure.

The last step is to loop the line attached to the anti-skate weight into the correct slot on the tonearm and hang it from the wire loop. After you’ve completed this task, you’ll understand why the industry was so excited about compact discs back in the ‘80s.

Seriously, the Pro-Ject turntable used in The+Record Player is an advanced piece of gear. Listening to vinyl requires a commitment to repeated recalibration if you want to keep your collection in listenable condition. Any turntable that doesn’t require some level of setup probably isn’t one you should use to play $40 reissues or vintage rarities.

What are the controls for The+Record Player?

There’s a source selector button that switches between phono, AUX, PC, optical, and line. When phono is the source, a long press switches the turntable between 33 1/3 RPM (red) and 45 RPM (green). Press the separate Bluetooth button to switch to that source.

There are “+” and “–” buttons to control volume and a button that cycles through the three listening modes: Stereo, Wide, and Mono. There’s also a 3.5mm headphone jack that mutes the speakers when you plug in your cans and a handy 3.5mm AUX input that duplicates the function of the rear AUX input jacks and overrides them.

Can The+Record Player rip my vinyl?

One of the great features of the Pro-Ject line is the USB port that allows users to connect the turntable to a computer and convert their vinyl to digital audio files. The+Record Player doesn’t include the required USB Mini-B to USB-A cable to connect from its USB jack to your computer, but you can get one online for $5 or less.

Once you line up the correct sound settings on your Mac or Windows PC, you can use free software like Audacity, pro audio software like ProTools, or an included Mac program like GarageBand to capture your tracks and export them in the music file format of your choice.

The +Record Player performs exactly as well at recording vinyl as the Pro-Ject Debut Carbon I’ve been using for years. This isn’t an essential feature for most users, but it’s a nice bonus for anyone interested in archiving music that’s not available to stream.

How good is Bluetooth playback with The+Record Player?

The+Record Player is also an excellent Bluetooth speaker. Press the Bluetooth button on the front of the unit to enter pairing mode and locate THE+PLUS RECORD PLAYER in your source device’s Bluetooth settings.

The unit can only pair with one Bluetooth source at a time, but it did a great job of reconnecting to the iPhone I used in testing.

What are the other connections available with The+Record Player?

There’s an optical (Toslink) digital input that you can connect to a television or streaming set-top box, such as an Apple TV or Roku Ultra. The+Record Player’s audio will likely be an upgrade over the speakers built into most TVs, but don’t expect it to create the kind of immersive experience that a surround sound system or advanced soundbar can deliver.

Also on board is an auxiliary RCA input, so you connect a CD player, cassette deck, or radio tuner, while an RCA pre-out will send an unamplified signal to an external amplifier, subwoofer, or a pair of powered speakers. If you’re using external speakers, there’s a switch to turn off The+Record Player’s internal speakers.

How does The+Record Player sound when listening to vinyl?

I took the opportunity to christen The+Record Player with a previously sealed copy of Kelly Gordon’s 1969 Capitol LP Defunked. Gordon co-wrote Frank Sinatra’s hit “That’s Life” and produced all of Bobbie Gentry’s hit records for Capitol. His own music has echoes of Gentry’s albums and a bit of Tony Joe White’s swamp funk. Defunked has never been reissued on CD nor is it available to stream, so vinyl’s the only way to go with this one.

My sealed copy had a slight warp (thanks, eBay) but the turntable tracked it flawlessly. The LP was arranged and conducted by Shorty Rogers and almost certainly recorded with the usual team of Los Angeles studio all-stars.

Even more interesting was listening to a copy of Pow!, the 1966 instrumental LP by Ted Heath and His Music from London Records’ Phase 4 series. Designed to showcase a listener’s hi-fi system, the Phase 4 recordings emphasize stereo separation, which makes them great for testing out new equipment.

The stereo effect was more than satisfactory in the system’s basic Stereo mode, but the digital processing in Wide mode might be effective enough to fool a visitor into thinking you’ve got a pair of speakers hidden several feet away from the turntable unit. It’s an impressive option because it creates a wider soundstage without distorting the music. I also liked Mono mode, which does a great job of creating viable mono versions of stereo recordings (“Electronically Reprocessed to Simulate Mono,” if you will).

Returning to the 21st century, the dance remixes on Paul McCartney’s 2021 McCartney III Imagined LP have plenty of bass. Even though the pre outputs on The+Record Player support adding a subwoofer, most listeners should be happy with the bass presented here. If you’re looking for something more, you might want to consider a component system.

Is The+Record Player a good value?

The Plus Audio The+Record Player is a beautifully designed device with audio quality that matches its great looks. If you can afford the premium price, the results are spectacular. You can even upgrade to the The+RP System that comes with a matching stand that features two LP shelves for $2100.