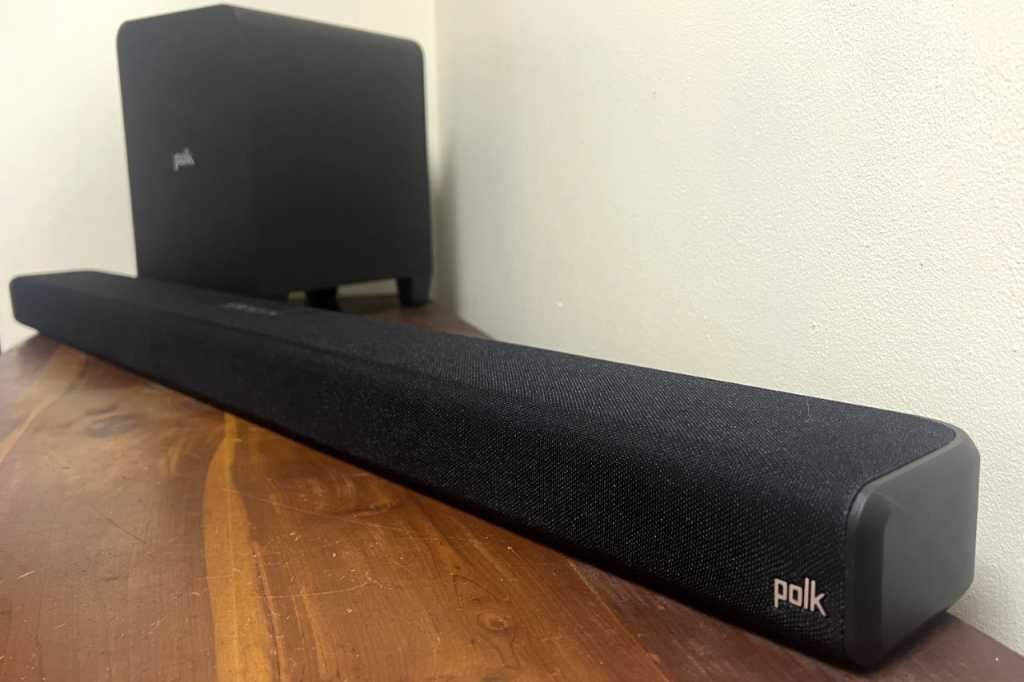 The affordable Polk Audio Signa S4 soundbar and subwoofer is a fantastic way to experience immersive audio, but it can’t be upgraded with additional speakers, and you’ll have to do without Wi-Fi.

Everyone needs to upgrade the built-in audio from their television, no matter how incredible the resolution or how large the screen. TV manufacturers just aren’t in the console business anymore and, rather than try to devise a way to shoehorn decent audio into their device’s slim profile, they just figure you’ll choose your own speakers.

That leaves a seemingly infinite number of options, starting with weakly powered speakers under $50 up to fantastically elaborate setups that cost $5,000 and up. The trick is to find the best combination of sound and features at a price that works for you.

The Polk Audio Signa S4 soundbar and subwoofer aims to deliver a Dolby Atmos experience at a budget price, and Polk has delivered, offering a setup that can handle the latest in Hollywood sound technology without breaking the bank.

There are caveats, however, including the lack of Wi-Fi–not unreasonable given the $399 price tag–as well as the inability to upgrade the soundbar with additional speakers.

What is Dolby Atmos?

Dolby Atmos is an object-based audio technology that creates a sense of immersive, three-dimensional sound, complete with surround as well as height effects. Most home video releases of Hollywood hits now include an Atmos soundtrack, and it’s also the technology behind Apple Music’s spatial audio, Tidal Hifi, and Amazon Music’s spatial sound mixes.

If you want the peak Dolby Atmos experience, you’ll need to invest in multiple speakers both behind and flanking your viewing position and–if you have the time, money, and inclination–height speakers that are installed in your ceiling.

That’s not a practical setup for many people, but more and more Atmos-enabled soundbars offer upfiring speakers that bounce height cues off your ceiling, a viable substitute to speakers in your ceiling. Audio manufacturers have also devised clever audio processing tech that gives a strong sense of true surround sound without the need for a bevy of satellite speakers.

The best soundbars do a remarkable job of delivering an immersive experience without all the extra gear, and the Polk Signa S4 competes with those systems at a much lower price.

How is the Polk Audio Signa S4 built?

The Polk Audio Signa S4 AX a 3.1.2-channel soundbar with two 1-inch tweeters, a pair of 4.7 x 1.6-inch mids, and a 1-inch center full range speaker. There are also two 2.6-inch upfiring speakers. The wireless subwoofer has a 5.9-inch down-firing woofer. Unfortunately, there’s no path to upgrade to a full surround system.

The soundbar itself measures 41.2 x 3.7 x 2.4 inches (WxDxH). If you’re using the Signa S4 on a media console, it’s going to easily fit underneath a television that’s 50” or larger. Polk includes wall mount spacers and a paper template if you prefer to hang the soundbar. The wireless subwoofer is 7.9 x 12.9 x 11 (WxHxD).

The L-shaped box also includes a remote, 2 AAA batteries, an HDMI cable, a power cable, and an optical cable.

How many HDMI inputs does the Polk Audio Signa S4 have?

Like more and more soundbars we’ve been seeing lately, the Polk Audio Signa S4 has but a single HDMI-eARC port, which should be fine for most people. Just connect the soundbar to your TV’s HDMI-ARC port, and then your TV will be able to send audio from any of its connected HDMI devices (such as streaming audio players, game consoles, and Blu-ray players) or smart TV apps to the soundbar via the included HDMI cable.

If you have an older, HDMI-less TV, the Signa S4 also has optical (Toslink) and 3.5mm auxiliary inputs (an optical cable is included in the box). Just be aware that neither optical nor analog audio connections support Dolby Atmos.

Does the Polk Audio Signa S4 support Wi-Fi and Bluetooth?

There’s no Wi-Fi connection on the Signa S4, so you can’t stream using Apple’s AirPlay 2 or Chromecast, and any firmware updates are going to have to be delivered via the soundbar’s USB port. That said, the lack of Wi-Fi isn’t too surprising for a Dolby Atmos soundbar in this price range.

The soundbar does allow you to connect to an external source via Bluetooth, which allows you to play audio from any app on your phone or tablet. Consider this to be a convenient option if you really need it, but it’s not a reason to buy this soundbar.

As a Bluetooth speaker, the Polk Signa S4 is decidedly average. It’ll do fine in a pinch, but you’re going to want to make sure you’ve got a smart TV or streaming device that includes an app for your preferred music service if you want to do any concentrated music listening.

How do you set up the Polk Signa S4 soundbar and subwoofer?

That’s it. Everything connected to everything else with no pairing buttons needed. I was able to control the volume with an Apple TV remote with no setup necessary. This process was so simple that it barely qualifies as a “process.”

Does the Polk Audio Signa S4 come with a remote?

There’s a simple remote control with relatively large, easy-to-read buttons. Even though it’s not backlit, the layout is excellent, and it was easy to learn to use it by touch in the dark.

What are the Polk Signa S4’s sound modes?

Movie Mode is the star of the lineup with Polk’s sound settings, the one designed to best reproduce the mix created by the team behind movies and shows. There’s a Night Mode that lowers the bass and limits dynamics while improving voice intelligibility. There’s also a Music Mode that’s better suited to music listening because it’s not looking to dig out all the audio effects so important to contemporary films.

Polk also offers three Voice Adjust levels that aim to boost dialogue for viewers that have trouble hearing. Level one is noticeable but not overwhelming, but the compression on the voices cranks up to the point where sound effects almost disappear. For people who need this feature, having a choice is welcome, and level three should really do the job when you have visitors with declining hearing.

How good does the Polk Audio Signa S4 sound?

The earliest “surround sound” effects for soundbars were compromised and gimmicky, but the improvements in digital signal processing over the past few years have been nothing short of astounding. While the Polk Signa S4 can’t quite match the performance of a true surround system, the experience of watching a movie through these speakers is more than acceptable for anyone who doesn’t want to invest in–or doesn’t have the space for–a full array of speakers.

The recent Marvel movie Spider-Man: No Way Home has an intricate sound mix with lots of moving audio effects, and the Polk impressively reproduced the sound. While there’s no way a system like this can match a proper Dolby Cinema experience, watching this movie at home with the Signa S4 delivered more detail than I could hear on the soundtrack when I saw the movie in a standard projection theater.

Normal stereo and mono movie and television mixes sound great as well. Polk doesn’t try to manufacture a surround mix where there isn’t one. The Voice Adjust feature is especially impressive on old television shows, digging out and pumping up the conversation on old episodes of Gunsmoke or The Love Boat streaming on Pluto TV.

Is the Polk Audio Signa S4 with the cash?

The Polk Signa S4 soundbar and subwoofer combo is a dynamite option for enjoying Dolby Atmos with a small footprint at a great price. The Bluetooth connection is adequate, and the AUX port has limited usefulness, so this configuration is really all about taking advantage of Dolby Atmos. For that purpose, it’s a great choice.

Our main reservation with the Signa S4 is its lack of Wi-Fi connectivity–although again, that’s not too unusual for a sub-$500 Dolby Atmos soundbar. If Wi-Fi and Atmos are necessities but you’re trying to stay within budget, consider Polk’s Wi-Fi- and Atmos-enabled MagniFi Mini AX for $499, a much smaller soundbar (albeit a very good one) than the $399 Signa S4.

Meanwhile, there’s our second-favorite mid-range soundbar, the $449.99 Sonos Beam, which offers both Dolby Atmos and Wi-Fi but doesn’t come with a subwoofer (although you can add one later).