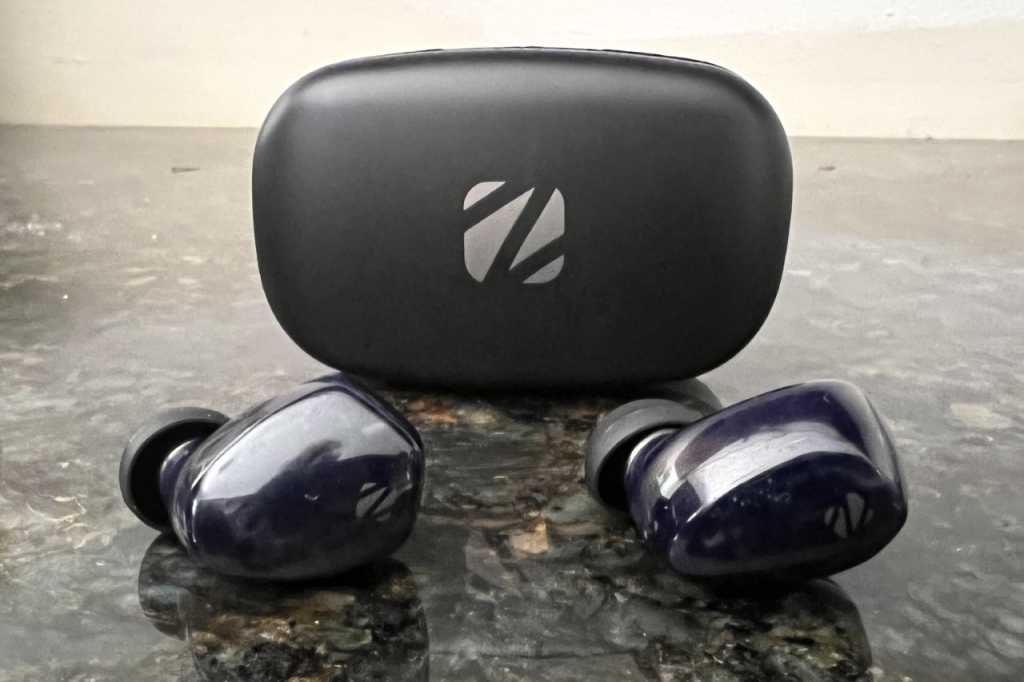 Zorloo has delivered an excellent pair of Bluetooth wireless earbuds that double as a pair of even better wired headphones with their own built-in DAC.

For anyone wondering if you can really hear a noticeable difference in audio quality between wireless Bluetooth and wired streaming, Zorloo has delivered the new Zophia Wire.less headphones, which allow for the most direct comparison to date.

That’s because the Zophia are wireless Bluetooth earbuds that convert to wired in-ear headphones when you attach the included headphone cable. That cable also features a built-in DAC that delivers a massive sonic upgrade.

So, you’ve got the same speakers with the same music delivered two different ways. One method really does sound better than the other, but even the second-place setup sounds as good as the best wireless earbuds at this price.

Zorloo sells four versions of the Zophia Wire.ess headphones. We tested the most expensive $209 configuration, which adds support for MQA decoding and a Lightning adapter for iPhone users. The MQA version minus the adapter is $199. If you’re not a subscriber to Tidal or an owner of MQA files, you can buy the standard version for $169, or $179 with Lightning adapter.

Calling it a “standard version” undersells the Zophia’s capabilities. When using the wired/DAC configuration, both models support sampling frequencies up to PCM 768kHz and DSD 22.5MHz.

Photographs don’t really do justice to the Zorloo Zophia Wire.less earbuds. The smoky, slightly translucent plastic seems to read as black in the images on Zorloo’s site and in the photos taken for this review.

The internal electronics are barely visible through the shell and the effect is of a polished stone, with the guts of the earbuds suggesting veins in the rock. It’s a nice touch. Depending on the light, they can look either black or blue.

The Zophia earbuds fit almost perfectly in my ears, and I never had the sense that they might fall out. I wouldn’t hesitate to use them for hiking, biking, or working out. The 6.2-gram buds feature IPX4 water resistance, so they should be able to handle any sweaty activity.

There’s no app for these earbuds, so they’re designed to pair right out of the box. They each have a custom 6mm neodymium dynamic driver, use the Bluetooth 5.2 standard, and support the aptX and AAC streaming protocols. The battery offers 5 hours of playback with an additional 20 from the case. The case doesn’t support wireless charging, so you’ll have to use the included USB-C charging cable.

You can also answer and hang up a phone call with a double tap. The built-in mic delivers very good sound quality for a pair of wireless earbuds in this price range.

The Zorloo Zophia Wire.less earbuds fit my ears so well that they produced outstanding passive noise cancellation. The Zophia headphones are not designed to filter out something as intrusive as airplane noise, but they should manage to cut out a lot of office background chatter. ANC can be exhausting and disorienting over the course of several hours, so earbuds like these offer a great alternative.

How do the Zorloo Zophia earbuds perform in wireless mode?

Bluetooth listening serves up outstanding clarity, with very slight emphasis on the low end. These buds aren’t tuned for devoted bass heads, but Zorloo pushed the bottom end just enough to keep the beat present at lower volume and right in the middle of the mix at louder settings. The soundstage might be a bit too narrow for some listeners, but I found it to be just right for listening while on the move.

At one point during testing, the earbuds disconnected from each other and only one would connect to my phone at a time. For its part, Zorloo suggests resetting the headphones by pressing the logo on both earbuds for 10 seconds. That was the ultimate solution to the issue, but it required a couple of phone reboots and multiple failed pairings. If you’re used to the rock-solid performance from Apple AirPods, this process might be a bit frustrating.

How do the Zorloo Zophia earbuds perform in wired mode?

We’ve established that the Zorloo Zophia headphones are an excellent pair of wireless earbuds that sound as good as other pairs in their price range, but the real reason to choose these is the wired configuration with included DAC.

The Zophia headset includes a braided headphone cable with two proprietary four-pin connectors. Each is labeled L or R for easy connection to its respective earbud. Rather than require a separate unit for digital-to-analog conversion, Zorloo has built a tiny DAC into the connector end of the cable.

The MQA version comes with an ESS Sabre 9281ACPRO High Performance SoC Audio DAC, while the standard version includes the ESS Sabre 9270C Higher Performance SoC Audio DAC. The DAC has a status LED to let you know the resolution of the track you’re playing. Blue indicates a sampling rate of 48 kHz or lower, red is greater than 48 kHz, and magenta represents MQA playback.

There are two comparisons in play here. First, how does the wired configuration of the Zophia wireless headphones compare to the Bluetooth setup? And second, and how do they compare to earbuds used with a dedicated DAC?

The engineers at Zorloo realized that if you’re going to attach a cable to your earbuds and plug them into the audio source, you’re likely settling in for a more focused listening experience. The DAC consistently offers more audio detail and a broader soundstage. Part of that difference is due to the inherent limitations in Bluetooth, but there’s a sense that the tuning of the wireless stream was designed to minimize those limitations and create the most listenable experience under the circumstances.

Wired DAC listening offers a closer-to-master audio with a wider soundstage. There’s no way AAC or aptX streaming can come close to the results a good DAC can deliver, and the ESS Sabre line is in some of the best DACs on the market.

The DAC listening experience doesn’t quite match what you’ll get from the Questyle M15 DAC paired with Periodic Audio Carbon in-ear monitors, but these $200 headphones come remarkably close to the experience you’d get with a $249 DAC and $499 in-ear monitors.

Listening to Tidal’s MQA stream of U2’s 1991 album Achtung Baby through the Zophia headphones in wired mode, there’s audio detail and presence that’s just not possible via Bluetooth. Sure, there’s more musical depth when switching to the Questyle/Periodic combo, but Zorloo has delivered an experience worth comparing for around a quarter of the price.

There are similar results when playing the CD-quality stream of Beyoncé’s album Renaissance via Apple Music. Tracks like “Alien Superstar” and “Thique” sound like the club bangers they are via Bluetooth, but connecting the cables and switching to the DAC delivers even more low end and makes it easier to hear the sonic ambitions of the artist and producer.

Are the Zorloo Zophia wireless headphones worth the cash?

The Zorloo Zophia Wire.less headphone is an outstanding value, giving you excellent Bluetooth earbuds, a dedicated DAC, and the headphone cable you need to use that accessory. You can buy one product instead of three if you’re interested in getting into hi-res audio with your mobile device.

There are downsides to the Zophia, of course. These earbuds don’t offer ANC or an app with the ability to tweak the EQ setup. There’s no wireless charging option, so you’ll have to plug in the case to recharge the earbuds. There’s no microphone or controls on the headphone cable, so you’ll have to do without those features when you’re using them as wired headphones. There’s no bag or case for the headphone cable, so you’ll likely want to leave them at home unless you can spare a dedicated pocket in your bag or backpack. For me, the DAC got warm during longer listening sessions. It was never hot enough to cause worry, but it’s something to keep track of over time.

Looked at another way, however, Zorloo has concentrated on maximizing the audio experience, so they’ve skipped the features that don’t directly relate to audio quality to keep these earbuds at an affordable price. If these were only a pair of Bluetooth earbuds, their sound would rank with the best I’ve reviewed. Add in the dedicated DAC and cables, and you’ve got a compelling idea that’s executed well. The Zophia Wire.less headphones are worth a look.