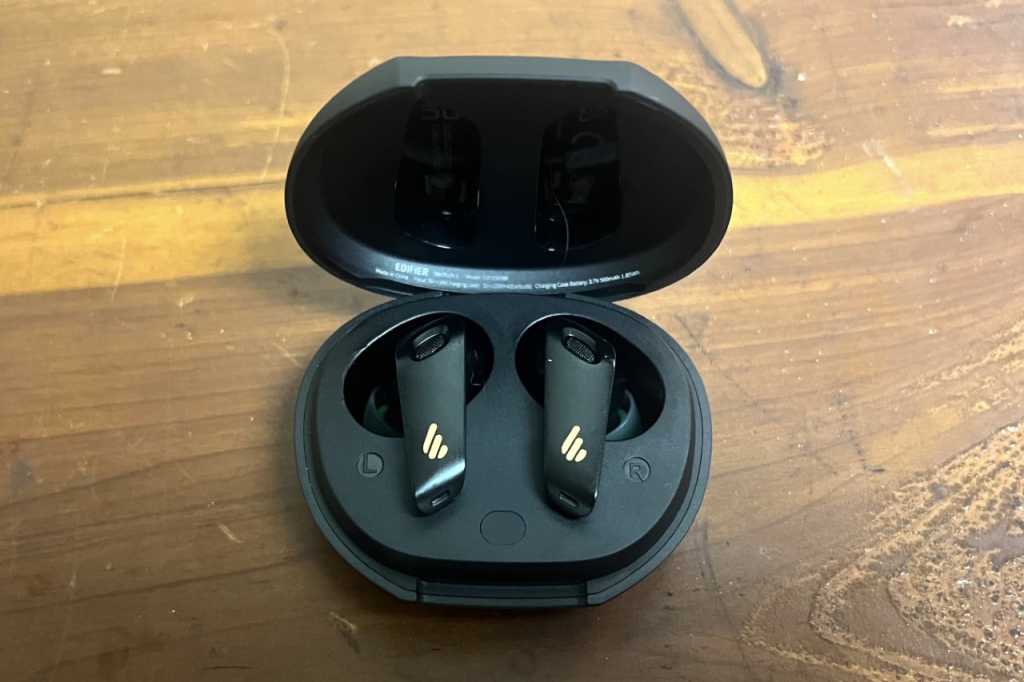 James Barner/Foundry
At a glance

It’s hard to judge a pair of earbuds when you can’t access its most important feature. For users without access to a Snapdragon Sound-enabled phone, the Edifier NeoBuds S are too expensive for what they can deliver.

Edifier has just released its NeoBuds S headphones, which retains the basic design of its recent NeoBuds Pro model, but with some significant changes to the underlying technology. The manufacturer has included Qualcomm’s latest Snapdragon Sound streaming protocol, which is unfortunately unavailable on any current phone designed to work with U.S. carriers.

What’s left is a pair of comfortable earbuds with strong active noise cancellation and some incredibly complicated app controls that should let anyone who’s into custom EQ settings alter the sounds to their heart’s content.

What comes with the Edifier NeoBuds S true wireless headphones?

Edifier includes seven pairs of ear tips in different sizes, so there’s an excellent chance that everyone can find a perfect fit. There’s a USB-A-to-USB-C charging cable and a nylon drawstring carrying bag for the case and cable.

The NeoBuds S support fast charging, but only via the enclosed cable, given that the case doesn’t support wireless charging. If you’re out of power, a 10-minute charge will give you 1.5 hours of playback.

The NeoBuds S also have an IP54 dust and waterproof rating, so they’re good to go for workouts and outdoor activities. But while the buds are sweatproof, they won’t survive a dunk in the pool.

Does Edifier offer an app for the NeoBuds S?

Edifier has an app available for both iOS and Android. Its most charming feature lets you choose one of eight colors for the light strip on the front of the NeoBuds S case. The feature adds nothing to the functionality of the earbuds, but it’s a nice touch that lets you personalize your NeoBuds in a non-flashy way.

There’s also a battery indication for each earbud and the charging case, but you’ll have to put one earbud in the case to get a reading on the case.

How good are the NeoBuds S noise canceling and ambient modes?

Anyone looking for maximum noise reduction for airplane travel will appreciate the aggressive ANC the NeoBuds S deliver. The audio is noticeably compressed versus Normal mode, but that’s to be expected from earbuds or headphones that crank up the noise cancellation. If you want powerful ANC, you won’t object to the results here.

Ambient sound lets you hear surrounding traffic noise cut, and the wind reduction is effective. Unfortunately, all playback modes shut off when you’re on a phone call, so don’t expect any wind reduction or noise reduction when calling from the beach when you’re supposed to be at the office.

The Sound effect panel lets listeners choose between Classic, Dynamic and Customized settings. The Customized settings let you tweak four sliders in four different frequency ranges and then save and name the custom EQ levels. If you listen to both deep bass electronic music and delicate psychedelic folk, you’ll be happy to tweak the music playback to fit the genre.

How does Snapdragon Sound work on the Edifier NeoBuds S?

The big news here is that Edifier has chosen to build the NeoBuds S with Snapdragon Sound, Qualcomm’s new hi-res streaming format that promises 24-bit/96 kHz sound and is designed to compete with Sony’s LDAC protocol. Unfortunately for U.S. customers, support for Snapdragon is so far almost exclusive to Xiaomi, a Chinese company whose phones are not sold through U.S. carriers.

If you’re an American customer looking at the NeoBuds S, the important news is that they support the AAC, SBC, and Qualcomm aptX codecs, along with limited support for the aptX HD protocol. Neither Samsung nor the Google Pixel support aptX HD, so those phones are limited to regular aptX. As always, all iPhones are limited to AAC.

The NeoBuds S follow the Edifier NeoBuds Pro, which were released earlier this year and do feature support for LDAC and somewhat limited support for the higher-res LHDC, currently in use only on non-U.S. brands like Xiaomi, Oppo, Huawei and Redmi. Still, NeoBuds Pro buyers will get access to LDAC on the large number of Sony, Google Pixel and Samsung phones that support it.

How good do the Edifier NeoBuds S sound?

I tested the NeoBuds S by listening to AAC playback from Apple Music on an iPhone 13 Pro Max. For pure music listening, the NeoBuds S sound fine, although I’d choose the Soundcore Liberty 3 Pro or the recently reviewed AXS Audio Earbuds and 1More Evo in-ear headphones as better choices for music lovers.

On the other hand, the ANC on the NeoBuds S is far better than on the Soundcore, AXS Audio, or 1More buds, and it’s as effective as what you’d get from much more expensive Sony or Bose true wireless headsets.

Of course, without access to a Snapdragon Sound-enabled phone, we’re not really hearing the NeoBud S headphones at their best. If the Qualcomm technology is built into the next generation of Android phones, our assessment may eventually be far more positive.

Should you buy the Edifier NeoBuds S?

Leaving Snapdragon Sound aside, we are impressed with the strong ANC performance on the NeoBuds S, and listeners who like to create their own specific EQ settings might be swayed by the ability to create and save customized settings in the app.

But minus Snapdragon Sound, the NeoBuds S sound just OK in terms of music, and they’re saddled with iffy touch controls and a case that doesn’t even offer wireless charging.

So unless you own a phone that does support Snapdragon Sound, the NeoBuds S are very expensive for what they deliver.

Updated on August 10, 2022 to fix the byline, which was incorrectly assigned due to an editing error.