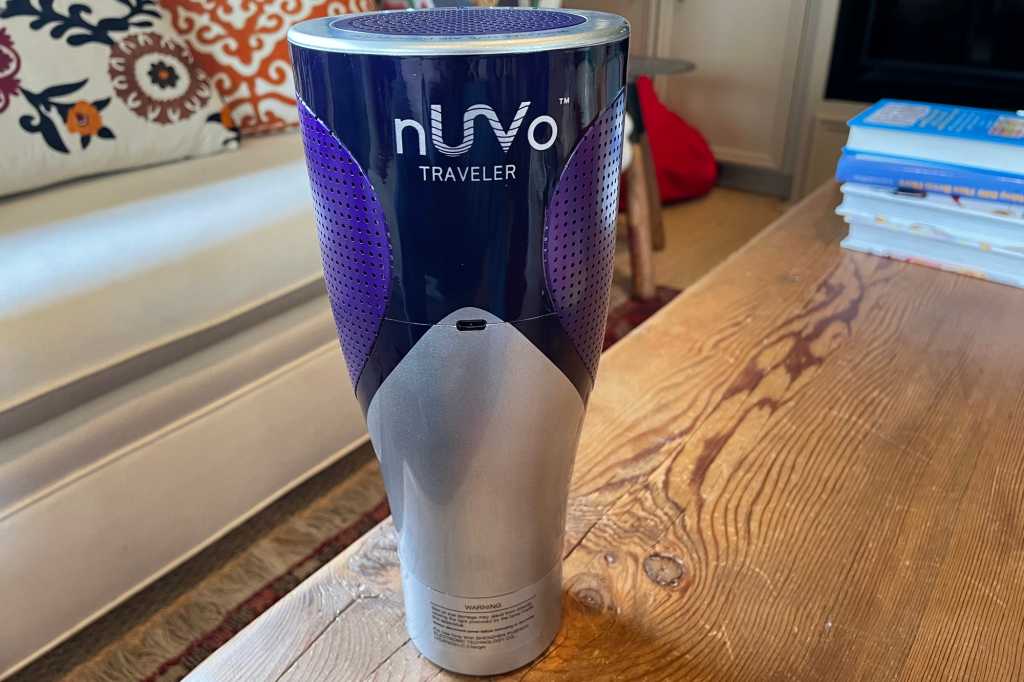 This portable purifier is built around an ultraviolet light and won’t effectively clean particulate matter from the air.

The Nuvo Traveler is the latest in a category of products that I figure is emerging just as people are deciding they probably don’t need it. Personal/portable air purifiers of this class are designed to go with you. As such, and unlike bulky stationary filters, the Nuvo Traveler weighs just under 2 pounds and is 10 inches tall, with the overall appearance of a (very purple) fast food soda cup. In fact, the battery-powered product will fit in your car’s cupholder, giving you up to 4 hours of purifying power on a single charge.

It’s manufactured by Energy Focus, a firm focused on developing LED lighting for commercial, military, and health-and-wellness applications. The NuVo Traveler is a filterless device, using a simple mesh screen and a UVC light bulb to kill airborne germs. As such, the product is billed as a “personal germicidal UVC air purifier” and a “virus-targeted personal UVC air disinfector” and should probably not be relied upon to clean particulate or VOC pollutants in any meaningful way.

This review is part of TechHive’s in-depth coverage of air purifiers.

Before we go on: A word about charging. While the cable included looks like a USB-C cable, online reviews complain that it isn’t actually a legitimate USB-C cable but merely looks like one. Sure enough, the Nuvo does not charge from a standard USB-C cable, and the cable included with the device does not quite fit into a standard USB-C receptacle on another device. In other words, you’ll need to use the included cable and this cable alone to charge the Nuvo.

Both a standard A/C adapter and a 12-volt car adapter are included, which you’ll also need to use exclusively as well. In my testing, battery life was in line with expectations, offering about 4.5 hours of run time on its lowest power level. (Again, 4 hours is the specification.)

Controls are extremely basic, limited to a single power button that also toggles between the two fan speeds. It’s actually very quiet at its low-speed setting, though quite a bit louder when you turn it up, which makes it not wholly comfortable for on-the-go use at this setting. Either way, as noted, the airflow coming from the device feels decidedly tepid. There is no wireless connectivity or other smart features available, so this single button is really it.

It’s also worth noting that the device is supposed to be user-serviceable by removing the grille on the top of the purifier, so you can clean the simple mesh prefilter screen inside. I was unable to get the grille off no matter what I tried—including wedging various items into the holes in the grille to use as leverage.

If the gaudy purple and silver design doesn’t turn you off, I imagine the $195 price tag will. That’s enough to make the Nuvo Traveler more expensive than many high-end whole-room purifiers—all of which will actually, you know, purify the air with HEPA filters and more. While there’s something to be said for ultraviolet germ-killing as an add-on, I suspect that few would consider it to be altogether useful on its own in the absence of any sort of mechanical filtering.