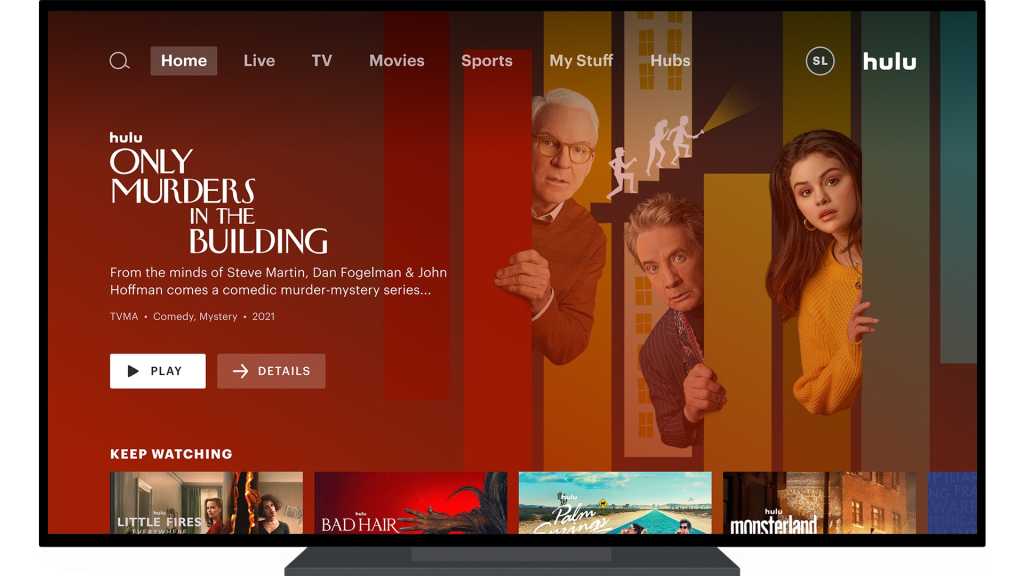 Hulu
At a glance

Hulu’s cable replacement service gives you a lot for your money, but its app can be a hassle.

Hulu + Live TV isn’t the best cable replacement service, but for some cord-cutters, it might be the best value.

For $70 per month, you get a wide variety of live broadcast and cable TV channels, plus the full Disney bundle—Disney+, ESPN+, and Hulu‘s on-demand service—which would cost $14 per month on its own. The more Disney-owned streaming services you pay for already, the more economical Hulu’s live TV bundle becomes.

Hulu + Live TV is a tougher sell for those who don’t care for any of Disney’s other offerings. Its menu system is more complicated than YouTube TV—our current pick for the best live TV streaming service—and viewing on TV devices is limited to a single home address.

The upside is that Hulu + Live TV gives you a lot of television to watch for less than a typical cable bill. You’ll just need to look past a handful of shortcomings to enjoy it.

This review is part of TechHive’s coverage of the best streaming TV services.

Updated August 15, 2022 to report that Hulu has fixed the problem that prevented Roku and Samsung smart TV users from skipping ads in recorded live TV shows.

You can see a full list of Hulu + Live TV channels by selecting “view channels in your area” on Hulu’s website, but the gist is that it will replace most of the popular channels you had with cable or satellite TV for $70 per month.

In most markets, you’ll get local stations for ABC, CBS, NBC, and Fox. The three biggest cable news networks—CNN, Fox News, and MSNBC—are also on board, as are major national sports channels such as ESPN. A wide range of entertainment channels, such as HGTV and Discovery, are available as well. Cloud DVR service is included, and you can store an unlimited number of programs for up to nine months.

The biggest omissions from Hulu’s lineup are PBS, AMC, and the Hallmark Channel. And unless you’re in an area served by regional NBC Sports networks, you won’t get any regional sports coverage.

Beyond the base package, a $10-per-month Sports add-on includes NFL Redzone and several other channels, while an $8-per-month Entertainment bundle adds 16 more channels, including MTV2, Cooking Channel, and Discovery Family. Premium channel add-ons include Showtime, HBO Max, Cinemax, and Starz.

All these channels can be viewed on up to two devices at the same time. A $10-per-month “Unlimited Screens” add-on gives you unlimited simultaneous streams at home, and up to three streams on mobile devices outside the home.

Just one caveat: Hulu only lets you watch live channels on TV devices from a single home location, based on your IP address. You can watch from anywhere on phones, tablets, and laptops, and you can change your home location up to four times a year, but forget about taking a streaming stick with you to watch Hulu + Live TV on quick trips.

As I’ve written before, Amazon’s Fire TV Stick 4K Max is the best device on which to access Hulu + Live TV. It has a dedicated Hulu launch button on its remote, plus you can launch live channels voice with the remote’s Alexa button, using commands like “tune to ESPN on Hulu.”

Is Hulu + Live TV easy to use?

I have a love-hate relationship with Hulu’s interface, which excels at helping you discover new shows but can be inefficient at getting to things you already want to watch.

The home screen, for instance, bursts with staff picks and suggestions based on your viewing habits, and it makes excellent use of cover art in various shapes and sizes. It doesn’t take much digging to appreciate the vastness of Hulu’s catalog.

At the same time, finding the list of shows you’re already watching requires a few scrolls down the home screen, and the DVR menu is tucked into a separate “My Stuff” tab at the top. Both should be much more prominent.

Hulu’s live TV guide also needs improvement. While it does offer a 14-day preview, you must click each program for full episode details—the guides on some other services expand these details automatically when you highlight a show—and series recording options are hidden behind an extra “Show Details” menu. Managing your favorite channels list is also a slog, requiring you to visit a separate “Hubs” menu, select channels one-by-one, and then add them to your “My Stuff” list.

There’s also no easy way to browse the live TV guide without losing sight of the video. Hulu + Live TV doesn’t offer a mini guide of any kind, and while audio from the current channel does play in the background when you bring up the grid guide, the grid covers up the entire picture.

Hulu’s menu system does have a lot of nice touches. It offers clear explanations for its recommendations, its menu buttons never feel cryptic, and the catalog is fun to explore. But sometimes the live TV component feels like an afterthought compared to the on-demand experience.

Hulu made a major change to its DVR in the spring of 2022, dropping its limits on recording time and instead letting users save unlimited programs for up to nine months. It also stopped charging extra for ad skipping, so you can bypass commercials for any show you’ve saved to the DVR.

Still, figuring out which ads you can skip can get confusing due to the nature of Hulu’s service.

For an extra $6 per month, Hulu offers a “no ads” version of its on-demand catalog. Hulu + Live TV, however, has a larger on-demand library than the core version of Hulu, and ads for those extra shows can’t be skipped even with the “no ads” upgrade. While you can always record shows to your DVR for ad-skipping purposes, that won’t do you any good for on-demand cable shows with no upcoming air dates.

Hulu’s “My Stuff” menu, which serves as a catch-all for both your watchlist and DVR recordings, further adds to the confusion. While browsing this menu, there’s no indication of whether an episode comes from your DVR (where you can skip ads) or the on-demand library (where you can’t). Hulu does provide a “Recordings” tab that exclusively displays DVR content, but it’s all arranged into a long, disorganized list,without even a way to jump into specific season of a given show.

One other annoyance: For team-based series recordings, Hulu + Live TV creates DVR pages for both teams in a matchup, including the opponent of the team you added to your DVR list. This just creates even more clutter to wade through, and again shows how the live TV component feels like less of a priority than Hulu’s on-demand service.

Hulu + Live TV offers smooth 60-frames-per-second video on all sports, news, and local channels, and 5.1 surround sound is available on a wide range of devices. Video resolution, however, depends on which device you’re using. While Hulu supports up to 1080p resolution for live channels on Apple TV, Chromecast, Fire TV, Samsung TVs, Xbox One, and PlayStation, other devices are limited to 720p, including Roku players.

Unlike YouTube TV and FuboTV, Hulu has not yet dabbled in 4K for live television (both of those services charge extra for the privilege), though it does offer some on-demand shows in 4K.

Hulu vs. the competition

Hulu + Live TV’s closest rival is YouTube TV, which has a similar mix of local, news, sports, and entertainment channels for $65 per month. YouTube TV’s interface is simpler and its DVR isn’t as fussy, but it doesn’t have Hulu’s vast on-demand catalog, nor does it come with Disney+ and ESPN+.

FuboTV, also priced at $70 per month, has a more traditional DVR, based on recording hours instead of time limits, and it offers some regional sports networks that Hulu lacks, such as NESN, Root Sports, and AT&T SportsNet. However, it lacks Turner channels such as TBS, TNT, and TCM. DirecTV Stream also costs $70 per month and has many top cable channels, though its package with regional sports raises its price to $90 per month.

Cheaper options such as Sling TV, Philo, and Frndly TV are worth considering as well, but they’re missing local channel coverage, and neither Philo nor Frndly TV offer major cable news or sports channels.

Against all these options, Hulu’s biggest advantage is its bundling with Disney services, giving subscribers a catalog that extends well beyond what you’d find on cable. You’ll just have to accept some occasional frustrations in exchange for that added value.