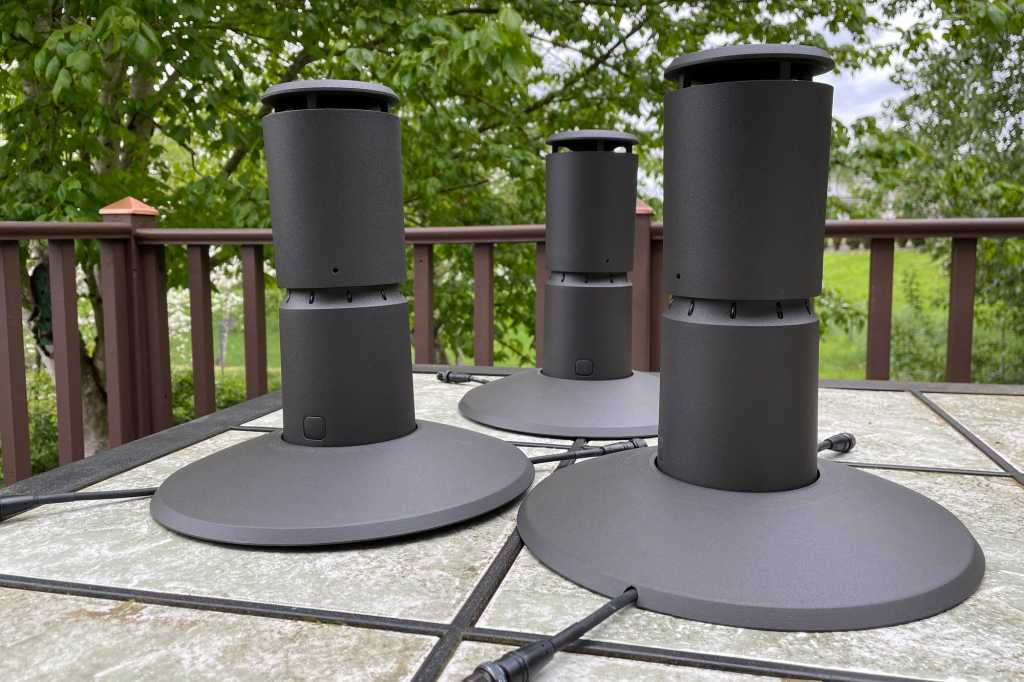 This mosquito-repelling system’s high cost—both up front and ongoing in the way of consumables—is offset by its absolute effectiveness.

Mosquitoes are more than just annoying pests. They can infect humans with diseases, including Zika virus, West Nile virus, encephalitis, and many more.

Thermacell has long offered devices that effectively repel the flying insects from small outdoor areas, and now its Wi-Fi-connected Thermacell LIV system is here to protect large—and even very large—outdoor living spaces. We found it to be highly effective, but it’s also expensive.

I have a small backyard, so I tested the system at my daughter’s home. A small creek runs through the back of her property, and the family has been plagued by mosquitoes in the summer, to the point where no one could go in the backyard without being swarmed and suffering multiple bites within minutes.

Less than 15 minutes after setting up and activating the Thermacell LIV system on her elevated 40 x 15-foot rear deck, there was no sign of mosquitoes. My daughter has been running the system for the past couple of months and tells me it has never failed to deter the bloodsuckers. The family has been able to enjoy barbecues and meals on the deck without worrying about bites ever since.

The good news is that Thermacell LIV is highly effective at repelling mosquitoes, even in large areas. The bad news is the high price tag, both up front and over time in the form of consumables. But before I get to that, let me explain the components that make up the system and how it all works.

The Thermacell LIV system consists of a central hub that plugs into an outdoor electrical outlet and connects to your home Wi-Fi network (2.4GHz networks only). You then hardwire the cylindrical LIV repellers to the hub using the provided low-voltage cables. Only the first repeller connects directly to the hub; the rest of the stations connect to the first in linear fashion. Finally, you’ll install the robust LIV app on your mobile device.

The weatherproof hub plugs into an outdoor GFCI outlet and can be wall mounted. The repellers are fabricated from a die-cast aluminum alloy and measure 9.5 x 3.5 x 3.5 inches (HxWxD). These come with ground stakes for installing the repeller stations in a lawn or flower bed, or they can be screwed directly into a deck or a similar surface. For this review, Thermacell provided a hardscape base ($18) for each repeller.

Each repeller is rated to cover a 20-foot radius by vaporizing a liquid chemical known as metofluthrin. Thermacell describes metofluthrin as a “synthetic molecule inspired by a naturally occurring chemical” and says the chemical is EPA-registered for use around children and food-prep areas. It’s also safe for pets. The repellent comes in a hemispherical plastic cartridge that you install inside each repeller.

Can you set up more than one Thermacell LIV system?

Each LIV hub can support up to five LIV repellers. If you need to protect a very large area that requires more than five repellers, you can deploy second and subsequent hubs, each with up to five additional repellers. Each LIV hub and its associated repellers are identified as zones within the app. Zones are controlled independently, but all the repellers in each zone will be either on or off—you can’t control individual repellers.

Thermacell says each repellent cartridge should last 40 hours, and the app is supposed to report the level of remaining repellent in each zone—not each repeller, because the consumption rate should be the same for all of them. We found this measure wasn’t all that reliable. There is no sensor to monitor the actual level of repellent in the cartridge; instead, the app just tracks the hours the system has operated and calculates a burn rate to determine how much repellent should remain in the cartridges.

It’s possible, however, that the cartridges we received with our review unit leaked in transit and therefore didn’t reach us with their full capacity. Thermacell told us that this had happened with some very early shipments, and while we didn’t detect any obvious leakage with our batch, we might have missed it.

How can you tell that a Thermacell LIV system is operating?

Each LIV repeller has an LED light ring that glows in a chase pattern while the system is starting up and glows steady when the system is providing active protection. You can customize the brightness and color of the light ring using three presets—daytime white, soft white, or Thermacell blue—or you can pick a custom color from a color wheel. Whatever color and brightness you choose will apply to all the repellers in that zone.

If you really want to, you can schedule on and off times based on calendar dates and times, though you’d need to live a highly regimented life to make that worth the risk of needlessly burning a lot of repellent.

How much does Thermacell LIV cost?

As I’ve already said, the bad news about a Thermacell LIV system is its cost. The $699 starter kit reviewed here consists of one LIV hub, three LIV repellers, three 10-inch aluminum ground stakes for placing the repellers in soil or a lawn, three 24-foot low-voltage cables to connect the repellers to the hub, and enough repellent for one season. A six-pack of repellent cartridges costs $120, which is a good time to remind you that Thermacell says each cartridge should last 40 hours.

Perhaps recognizing that consumers might be skeptical of Thermacell’s efficacy claim, the manufacturer offers a 60-day satisfaction guarantee. To quote Thermacell: “If you’re not 100% convinced it lets you spend more time outside doing what you love, pack it up and return it to us for a full refund. Simple as that.”

Besides the three-repeller starter kit, Thermacell sells four- and five-repeller starter kits for $799 and $899, respectively. Additional hubs cost $169 each and add-on repellers are priced at $149 each. So, unless you have a very small area to cover, buying a starter kit is more economical than building out a system à la carte. If you don’t want to do the work yourself, Thermacell can connect you with its network of professional installers; click the preceding link for more information.

Thermacell LIV is expensive, but worth it

If you have a significant mosquito problem or are highly vulnerable to the illnesses the bugs can transmit, Thermacell LIV will keep them at bay. It’s safe, effective, and much more comfortable than slathering your body with insect repellent. Its biggest drawback is its initial cost—which will be even higher if you need any of the pricey accessories—and the ongoing cost for repellent refills. Here’s hoping those prices will come down as Thermacell recoups its R&D investment.