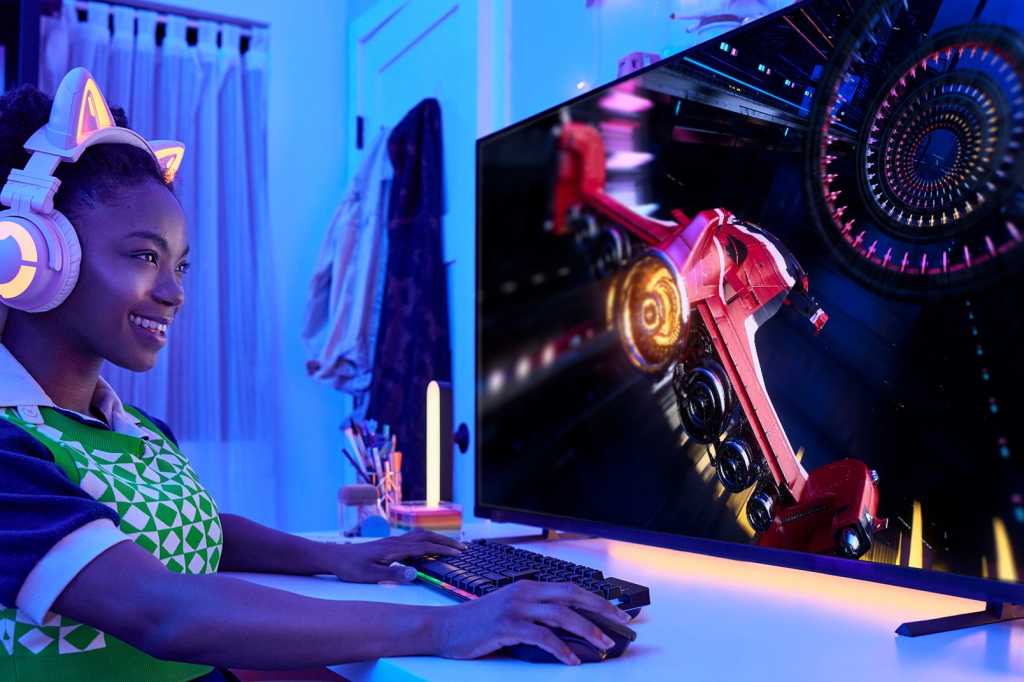 Vizio is looking to entice gamers with a new 50-inch quantum-dot TV that boasts a native 120Hz refresh rate at 4K and–even better–support for 240Hz PC gaming at 1080p.

Vizio showed off the 50-inch M-series Quantum X as part of its “summer showcase” of 2023 TVs and soundbars, which includes its revamped M-series, V-series, and D-series TVs; the addition of Wi-Fi 6E support across its M- and V-series sets; and two new soundbars, including the M-series Elevate with swiveling drivers and a bargain-priced, all-in-one Dolby Atmos soundbar.

Vizio already took the wraps off the 50-inch M-series Quantum X at CES back in January, but it’s now revealing pricing and availability for the set, as well as a couple additional screen sizes.

The big news about the 50-inch version of the Quantum X is its refresh rate: up to 240 frames per second at 1080p, good for ultra-smooth PC gaming performance, along with 120Hz at 4K support.

All models in the M-Series Quantum X line will offer up to 1,000 nits of brightness, and AMD FreeSync Premium VRR, with less than 8ms of input lag. The 50-inch Quantum X will have 16 local dimming zones, while the 65-inch and 75-inch models will have 30 and 32 dimming zones, respectively. Vizio also says its Quantum X sets will cover up to 78 percent of the Rec. 2020 color space.

Another key feature of Vizio’s M-series Quantum X TVs is that they’ll support Wi-Fi 6E, the new wireless standard that lets Wi-Fi devices operate in the relatively unpopulated 6GHz spectrum, allowing for far greater speed and bandwidth than on the crowded 2.4- and 5GHz bands. Vizio’s other 2023 M-series TVs and V-series sets will be getting Wi-Fi 6E support, too.

Meanwhile, Vision’s new, non-quantum dot V-Series TVs are adding AMD FreeSync across the entire line this year (previously, only larger V6-Series sets got the AMD FreeSync treatment), along with the ability to directly pair with Bluetooth headsets. Look for the V-series to ship this month, ranging from $289.99 for the 43-inch model to $779.99 for the 75-inch set.

The 1080p-only D-Series is also adding AMD FreeSync across the entire line of sets, along with Bluetooth headset support. Wi-Fi for the D-Series will be dual-band Wi-Fi 5 rather than Wi-Fi 6E. Prices for the new D-series starts at $159.99 for the 24-inch model, ranging up to $249.99 for the 43-inch model.

On the soundbar side of things, Vizio’s previously announced M-series Elevate will ship this month for $799.99, or $200 less than 2020’s P-series Elevate.

Like the original Elevate, the new M-series Elevate has left- and right-side drivers that can automatically swivel into up-firing position for Dolby Atmos and DTS:X height effects. But while the first Elevate had a perforated shell, the new version has a solid, fabric-covered design.

The M-Series Elevate also has a new design for the swiveling drivers, which are now left and right ports that peek out from the ends of the sidebar when the rotating drivers are pointing upward. The port tubes boast LED accent lights that can glow in multiple colors; the LEDs can also be turned off entirely.

Two HDMI ports are in back, including one HDMI input that supports 4K Dolby Vision throughput and an HDMI-eARC connection. You’ll also be able to adjust sound settings using an on-screen menu when the soundbar is connected to “select” Vizio TVs via HDMI, similar to “Roku TV Ready” soundbars and speakers.

Besides the M-series Elevate, Vizio took the wraps off another new soundbar: a 2.1-channel M-series all-in-one model with both Dolby Atmos and DTS:X support, virtualized via DTS Virtual:X.

The M213ad-KA will come with a total of 6 drivers, including a pair of 3-inch woofers, as well as two HDMI ports (an HDMI input and HDMI-eARC), 4K Dolby Vision passthrough, and Bluetooth 5.2.

As with the M-series Elevate, you’ll be able to access on-screen menus for the M213ad-KA’s audio settings when the soundbar is connected to a supported Vizio TV.

The new all-in-one soundbar will sell for $199.99, and as with Vizio’s other new TVs and soundbars, it will ship this month.

While TV manufacturers such as Hisense, Samsung, and TCL have jumped head-first into 8K TVs, Vizio has been taking a wait-and-see approach, and the company hasn’t changed tack this year.

During a press-only briefing last month, Vizio execs say that they “continue to evaluate” 8K, but feel there is “not a lot of content out there” for that level of resolution.

Also in the “continue to evaluate” bucket are technologies such as mini-LED backlighting and ATSC 3.0, also known as “NextGen” TV.

Meanwhile, Vizio didn’t unveil any new offerings for its top-of-the-line P-series, nor did it give any hints about the future of its OLED sets.

Updated on July 20, 2022 with clarified specifications from Vizio about local dimming zones and Rec. 2020 color space coverage for the M-Series Quantum X line. The original pre-briefing materials contained incorrect information about those details.