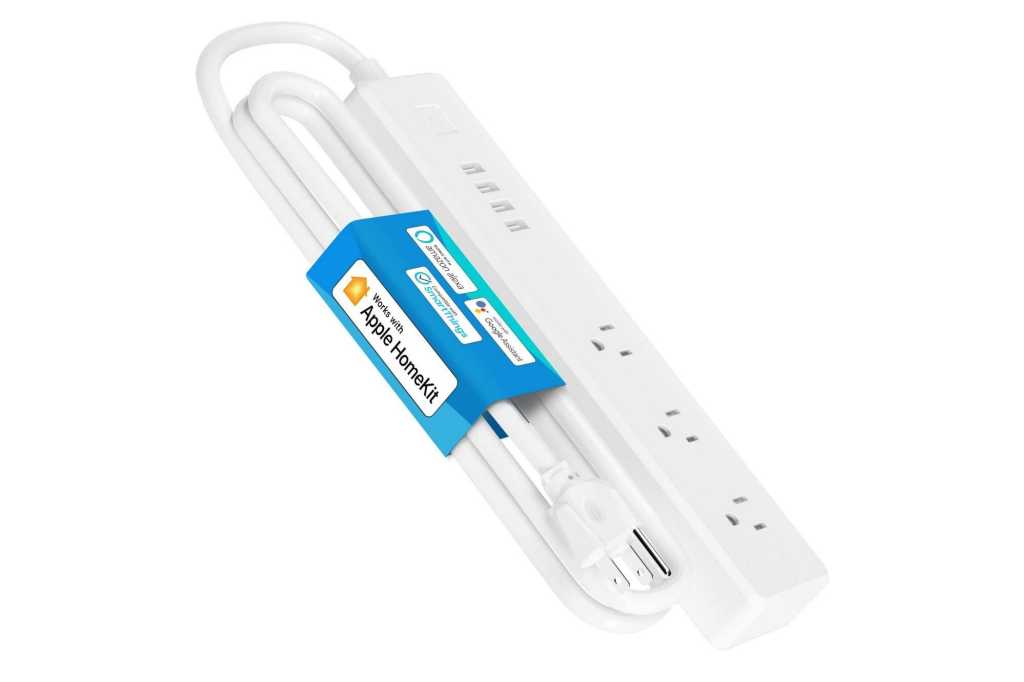 Meross Technology
At a glance

The Meross Smart Wi-Fi Surge Protector looks like a bargain, but a lack of information and third-party testing of its electrical characteristics makes it a non-starter for us.

Smart outlets can be useful as part of smart-home scenes: when the last person in your family has left the house, some lights, appliances, or other devices turn off automatically, and the reverse happens when you return. When you go on vacation, a schedule has smart outlets simulate the pattern of an occupied home to deter burglars.

When you want more than one smart outlet in a certain place in your house, however, many designs take up the space of two AC outlets. You can purchase a two-outlet version of smart plugs, but it’s still limiting. Meross Technology tries to overcome multiple limitations with its Smart Wi-Fi Surge Protector, and it succeeds—at least from an interface and feature perspective.

This surge protector has three independently controllable AC outlets and a bank of four USB ports, controlled as a group. Each AC outlet is sufficiently well spaced to allow standard plugs and fairly large DC adapters. The power strip includes a 6-foot (1.8 meter) power cord with a standard three-prong outlet. (This model is available in US and UK versions with the appropriate plug end.)

The AC side of the surge protector reveals one of the unit’s weaknesses: documentation. The well-designed manual written in slightly erratic English includes no technical specifications whatsoever. The box the unit comes in says that each AC outlet may only have up to 10 amps worth of power draw, which is about 1,200 watts with U.S. voltage, all the AC outlets can’t exceed 13 amps (about 1,600W). The company’s website, however, simply notes 15A (1800W) maximum load. Few devices in the home besides toaster ovens and space heaters would hit that kind of wattage, but it’s still confusing.

The USB bank is much simpler: each port can draw 5 volts at up to 2.4A (12W) up to a combined maximum across the four of 5 volts at 4A (20W). This is sufficient to run smaller USB devices and charge smartphones and tablets at a moderate pace.

I was unable to find in the documentation, box labeling, or website any details about clamping voltage, the level at which surge protection kicks in to suppress voltage overages. This is a critical bit of information that purchasers should at least be aware of. We generally recommend a clamping voltage of 330V on more expensive surge protectors and UPS power-backup units, and 500V on simpler power strips, enough to deflect most or all damage.

I can usually dig this data out of a company’s product filing with a laboratory that tests the product and then offers a label if it meets the grade. Unfortunately, Meross lacks a UL (Underwriters Lab) or other international certification mark. My general policy is not to recommend electrical devices that haven’t passed some sort of testing. My editor emailed the company’s public-relations contact twice to solicit this information, but received no response by press time.

Meross provides maximum compatibility by including Amazon Alexa, Apple HomeKit, and Google Assistant support. When pairing with HomeKit, the Meross device provided one of the best and trouble-free experiences I’ve had. You can have the surge protector appear as a single item in the Home app in iOS, iPadOS, and macOS, and then press and hold or double-click its entry to control or set automations for each outlet and the USB bank. You can also choose to have each of those items appear as separate entries.

This surge protectors includes a standard warranty against defects and failure, but Meross doesn’t include a reimbursement policy if the device fails to protect connected equipment. Most surge protectors have such a policy, but they often contain such constraints and limited periods of time to file claims that it’s hard to know if they represent more than marketing. Still, if you absolutely want a connected equipment warranty as part of your purchase, Meross doesn’t offer one.

The Meross Smart Wi-Fi Surge Protector has quite a bit going for it: three controllable AC outlets, sufficient charging wattage on USB ports, a long cord, and compatibility across three major smart-device ecosystems. The lack of electrical lab certification and a failure to provide baseline specifications, however, means that even at its price, I can’t recommend it.