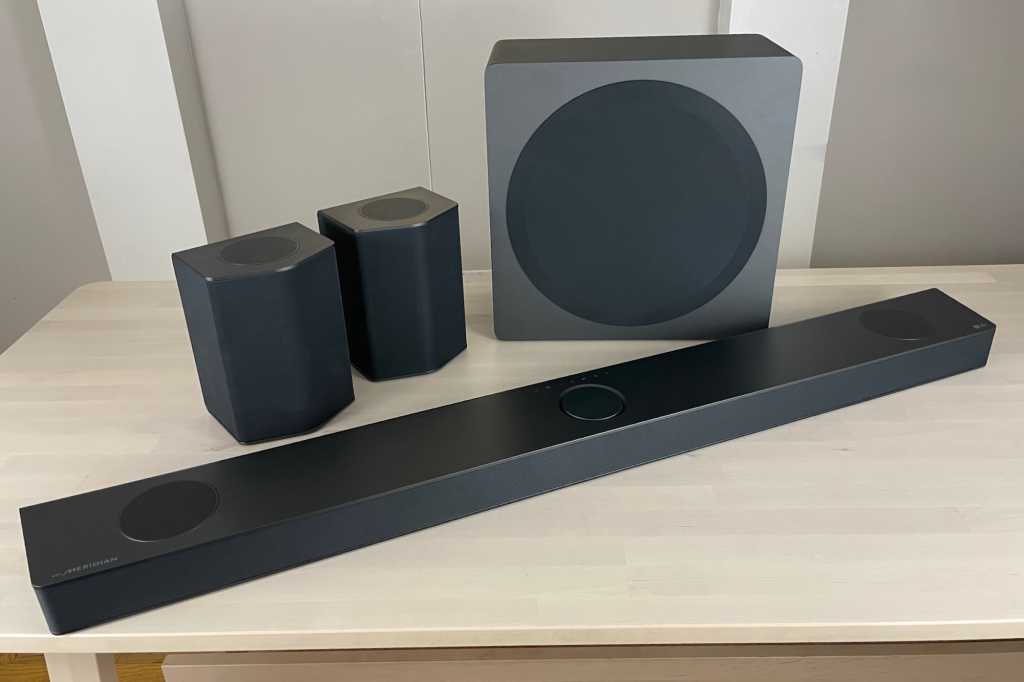 With its five height drivers, the LG S95QR takes the cake when it comes to immersive Dolby Atmos and DTS:X sound.

LG raises the immersion bar with the S95QR, a Dolby Atmos/DTS:X soundbar with not two, not four, but five upfiring drivers, including one for the center channel. LG’s new flagship soundbar for 2022 does a superb job of peppering the room with surround and height effects, putting you in a bubble of thrillingly immersive sound, while the additional center height driver shores up the dialogue.

The LG S95QR also arrives with AirPlay 2 and Chromecast support, not to mention an AI-powered room correction tool that adjusts the soundbar’s audio according to your home theater’s acoustics.

On the downside, I had a tough time getting the LG S95QR to connect to my Wi-Fi network (I eventually succeeded after several tries), and the power cords for the two rear speakers are way, way too short. Finally, the LG S95QR comes with a lofty $1,800 price tag (although LG was offering a $300 price drop at press time).

How many channels does the LG S95QR support?

The LG S95QR is a 9.1.5-channel soundbar, which is unusual as far as soundbar channel configurations go.

That “.5” at the end refers to the number of height channels, and typically that figure is either “.2”–denoting left and right height channels–or “.4”–for left, right, left-rear and right-rear. But the LG S95QR adds a fifth height channel for the center, with the idea being that the center height driver (which, like the other height speakers, bounces height cues off the ceiling) will help boost overall height cues as well as enhance the clarity of dialogue. We’ll see–and hear–a little later if that extra height channel pays off.

Besides the height channels, the LG S95QR boasts three front-facing channels (for the left, right, and center), four side-facing channels (two in the front and two for the rear), and two surround channels, giving us the “9” in the soundbar’s 9.1.5-channel configuration. Finally, the wireless subwoofer supplies the low-frequency “.1” channel.

How many HDMI inputs does the LG S95QR have?

The LG S95QR comes with three HDMI ports, including two HDMI inputs and an output that doubles as an HDMI-eARC interface. That HDMI-eARC port lets you connect your TV to the soundbar via a single HDMI cable, sending audio (including lossless Dolby TrueHD and DTS-HD Master Audio tracks) from all your TV’s connected playback devices (such as 4K Blu-ray players, game consoles, and streaming video players) down to the soundbar.

If you’d rather connect your video sources directly to the LG S95QR, you can do so using the two HDMI inputs, and then send both video and audio to your TV via the HDMI output port (4K video passthrough including Dolby Vision, VRR, and low-latency mode is supported). In general terms, it’s great to see a high-end soundbar that still bothers with extra HDMI inputs; more and more manufacturers (such as Bose, Bowers & Wilkins, and Sonos) are eschewing HDMI inputs in favor of a single HDMI-eARC connector.

Also on board is an optical (Toslink) input for older, HDMI-less TVs, along with a USB port that supports audio files (including FLAC, AAC, and WAV formats at up to 24bit/96kHz resolution) on an external drive.

How easy is setup for the LG S95QR?

Physical setup for the LG S95QR isn’t that difficult, although I ran into some speed bumps with the rear speakers and Wi-Fi configuration.

Measuring 47.2 x 2.5 x 5.3 inches (WxHxD) and tipping the scales at 11.1 pounds, the LG S95QR’s main soundbar housing is big, wide, and hefty, although at just 2.5 inches high, it should be short enough to fit beneath most TVs without blocking the bottom of the screen. An alternative to placing the LG S95QR in front of your TV is mounting it under your set, and a wall-mount kit (complete with brackets and screws) is included.

The 22.1-pound, 15.9 x 7.9 x 15.9-inch (HxWxD) subwoofer is pretty big as far as soundbar subwoofers go, and it’s tethered by a five-foot power cord. Short as the power cord is, it should be sufficient for placing the soundbar behind your TV or near (but not too near) to the sofa.

The two rear speakers come with the same five-foot power cords as the subwoofer, which makes placement tricky unless you have plenty of wall outlets nearby. Of course, you could always use extension cords, but a better option would be for LG to simply include longer power cables.

A final step is running LG’s AI Room Calibration Pro feature, which adjusts the soundbar’s audio according to the acoustics in your room. The process only takes a few minutes, and it involves the soundbar listening to a series of loud beeps, blurps, and other tones through a built-in microphone. Room calibration is a feature we’ve seen in plenty of other high-end soundbars (including models from Samsung and Sonos), and it’s great that LG has checked this particular box.

Does the LG S95QR have a remote?

The LG S95QR’s remote is the same revamped wand as LG packs in its other recent soundbars, and its sleek, ergonomic design is a major improvement over older LG soundbar remotes.

Besides the four-way navigation pad, there are also buttons for trimming speaker levels and accessing the soundbar’s settings menu, along with volume mute, sound mode, and Bluetooth buttons. Unfortunately, the volume up-down buttons are inconveniently placed in the top-left corner of the remote, meaning you’ll need to stretch your thumb to reach them.

You can also control the soundbar with the capacitive touch buttons on top of the main housing (with buttons for power, input select, volume up/down, play/pause, Bluetooth, and Wi-Fi). Likewise, the LG Sound Bar app offers access to all the LG S95QR’s modes and settings, along with plenty of options for trimming speaker levels.

Does the LG S95QR support AirPlay 2, Chromecast, and Bluetooth?

The LG S95QR offers both AirPlay 2 and Chromecast, meaning you can cast audio to the soundbar via Android phones, Apple devices, and any Chromecast-enabled app.

Does the LG S95QR work with Alexa or Google Assistant?

The LG S95QR works with both Alexa and Google Assistant. Once you’ve connected the soundbar to either or both of those voice assistants, you can control the unit by speaking commands to a nearby smart speaker, such as “Alexa, play Taylor Swift on the LG soundbar” or “Hey Google, turn the volume up on the LG soundbar.”

But while the LG S95QR does work with Alexa and Google Assistant, it doesn’t have either of those voice assistants built in, meaning you won’t be able to speak voice commands to the soundbar itself.

What sound modes does the LG S95QR have?

Among the sound modes you can pick on the LG S95QR are the typical Standard, Cinema, Sports, and Game modes found on other soundbars, but LG adds a couple other intelligent sound modes into the mix: AI Sound Pro, which delivers “customized” sound aided by artificial intelligence, and a Music mode augmented by DSP (digital signal processing) technology in partnership with Meridian Audio.

After a fair amount of experimentation, I found AI Sound Pro (which I’ve tested on other LG soundbars) to be quite effective at automatically tweaking the audio depending on what you’re listening to, while Music did a nice job of warming up music tracks. If you prefer a set-it-and-forget-it approach, sticking with AI Sound Pro would be a smart choice.

The LG S95QR also has a night mode that compresses the soundbar’s dynamic range for late-night listening sessions, while a Clear Voice mode boosts the dialogue volume.

How does the LG S95QR sound?

Sonically, the LG S95QR performed like a champ, delivering the most immersive Dolby Atmos and DTS:X audio I’ve ever heard from a soundbar (granted, I have yet to test Samsung’s new 2022 flagship, the 11.1.4-channel HW-Q990B).

Listening to the 4K Blu-ray of Star Wars: The Empire Strikes Back, there were Dolby Atmos height cues all over the place, such as when an Imperial Walker implodes from above and when the Rebel base on Hoth creaks and shudders while under Imperial attack. The center height speaker paid off, delivering clear, crisp dialogue, and overall, I felt like I was in an immersive bubble of dynamic sound.

Moving on to the UHD of Apollo 13 and its DTS:X soundtrack, the rumble of the Saturn V sounded deep and powerful yet never boomy, while the sound of the rocket’s billowing exhaust seemed to roll into the room and around my head. Even better, as the spacecraft lifted off from the launch pad, I could clearly hear height effects from the right-rear speaker as the ship disappeared into the ride side of the frame. In fact, throughout my testing, I noticed a precision and directionality in both Dolby Atmos and DTS:X height effects that’s absent in many competing soundbars.

I also dipped into 1978’s Superman on the iTunes Stores, and got a kick out of the Atmos-enabled title credits as they swooshed up, over, and across the screen, while John Williams’ score sounded crisp, full, and musical. I also loved the solid–but not boomy–”thunk” of Richard Donner’s “directed by” credit.

Switching from the AI Sound Pro mode to the Meridian-enhanced Music mode, I teed up Bruce Springsteen’s The Ghost of Tom Joad on Apple Music, and I was impressed by the wide soundstage and precise placement of the instrumentation. I also enjoyed Billie Eilish’s “Oxytocin” in Dolby Atmos, although for once I found the track to be a tad boomy; trimming the woofer levels brought the bass back in check. Ravel’s solo piano works performed by Bertrand Chamayou for Erato sounded clean and atmospheric in its Atmos mix, while a 24-bit/96kHz track of Chet Baker’s “Solar” played from a USB stick fairly shimmered.

So, is the LG S95QR the best soundbar I ever heard? In terms of Dolby Atmos and DTS:X performance, yes; I wrote the word “wow” in my testing notes more than once, for what it’s worth. I have heard soundbars from Samsung and Vizio that arguably packed more punch and excitement, but in terms of pure immersion, the LG S95QR is tops in my book.

Is the LG S95QR worth the cash?

I certainly have my quibbles with the LG S95QR. Connecting the soundbar to my Wi-Fi network was a royal pain, although it’s a process that (hopefully) you’ll only have to go through once. Ditto for dealing with the short power cables on the rear speakers, which you could always elongate with extension cords.

But once you have those annoying setup issues ironed out, the LG S95QR delivers a powerhouse Dolby Atmos/DTS:X experience, while AirPlay 2 and Chromecast means you’ll be able to cast audio from your choice of streaming music services. And don’t forget the USB port, which supports hi-res audio playback. The $1,800 price tag is certainly steep, but we’re already seeing price cuts–and personally, I’d rather spend more on a top-performing soundbar than skimp on an underperformer.