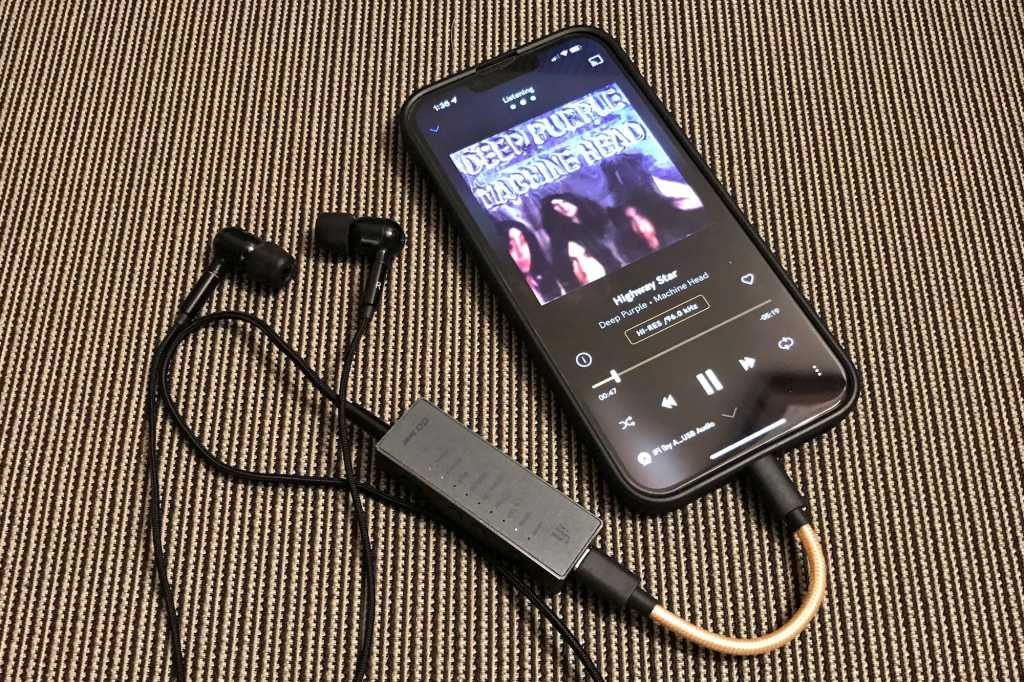 If you’re interested in the Hi-Res audio files streamed by Apple Music, Qobuz, or Tidal, wireless Bluetooth headphones can’t yet deliver your music in its full-resolution glory; you’ll need to use wired headphones with your streaming source.

If that source is an iOS or Android device, you’ll also need a device to take over the digital-to-analog signal conversion and give the audio signal a boost. The iFi Go is a combination DAC and headphone amp that delivers that upgraded audio in a compact package.

The iFi Go is approximately the size of a pack of gum and it’s that small size that a big part of its allure—and a substantial reason for its relatively high price. That compact profile also means that there’s no battery in the DAC, so you’ll be drawing power from your phone’s battery.

How is the iFi Go Bar built?

The exact dimensions are 2.6 x 0.9 x 0.5 inches with a weight of just 1 ounce. There’s a chamfered edge on the top of the unit, so it’s not quite a perfect rectangle. The case is made from an aluminum alloy with a black finish.

There’s also a limited-edition iFi Go Bar 10th Anniversary Limited Edition that retails for $499. The chassis on that model is copper, which is then gold-plated for a distinctive look. The unit weighs 2.26 ounces—more than double the standard version’s weight—but is still remarkably light.

The Go Bar will handle pretty much whatever formats you throw at it. There’s ultra-res PCM up to 32-bit/384kHz via USB, native Direct Stream Digital playback up to DSD256, up to 2x Digital eXtreme Definition DXD playback, and full MQA decoding.

Aside from controlling the volume from the Go Bar, you can adjust the output signal by engaging iFi’s XSpace and XBass features, along with Turbo Mode. XSpace is a processing effect designed to deliver a wider soundstage, while XBass not surprisingly boosts the bass. Turbo Mode gives a 6dB signal boost.

You get a leather travel case with pockets for the Go Bar and your connector cable. There’s a belt loop on the back side and a snap closure. Even if you’re not going to put it on a belt next to your pager or phone case, it’s nice to have a case to protect the finish when it’s in a pocket or a bag.

What controls are on the iFi Go Bar?

The side of the Go Bar has an IE Match switch to attenuate the power output for either the 4.4mm or 3.5mm jacks. There are two buttons to adjust the headphone output volume, which is 100-percent controlled on the iFi Go Bar and not on the source device. Pressing both volume buttons for 2 seconds turns Turbo Mode on or off. There’s also a button to engage iFi’s XSpace and XBass features.

The matte finish on the standard Go Bar is incredibly nice and, to keep the sleek look, designers decided to add the printed IDs for the playback resolution in a gloss finish that’s virtually the same color and in an extremely small font. You’ll need at least a direct light source to read the details and quite possibly some kind of magnification. Adding the detailed and labeled output information is a real plus, but iFi almost defeats the move by making it so hard to read.

I tested the iFi Go Bar with an iPhone using the USB-C-to-Lightning adapter that comes with the iFi Go. I used Focal Celestee headphones, Periodic Audio Carbon in-ear monitors, and less-than-$100 Sony MDR-7506 headphones. I also compared the Go Bar to the recently reviewed Questyle M15 and the AudioQuest Dragonfly Cobalt dongle-style DACs.

No matter what volume you were enjoying before you unplugged your iFi Go, it’s going to play back at a safe, low volume whenever the DAC is first plugged in. That’s a positive safety feature and one that should be applauded and appreciated. That doesn’t make it any less frustrating when your headphones come unplugged, and you want to get back to the music but first must figure out the right volume level again.

As I started this final testing for this review, Qobuz suggested I check out their 96kHz Hi-Res version of Deep Purple’s classic 1972 LP Machine Head, the summer soundtrack for stoner kids 50 years ago this year. The iFi Go revealed scores of musical details in “Highway Star” that never came through on the 8-track tape, especially the way Jon Lord’s distorted Hammond organ parts effectively double Ritchie Blackmore’s guitars.

That detail is a strong selling point for the Go Bar, but the whole listening experience seemed a bit underpowered until I turned on XSpace, XBass, and Turbo Mode at the same time. Those settings made Deep Purple truly rock, but they were overwhelming on a more subtle recording, like the latest 96kHz remaster of The Buena Vista Social Club, which definitely sounded better with all three turned off.

Things get a bit more complicated when comparing the Go Bar to the Questyle M15 and the Dragonfly Cobalt. While the Go Bar offers impressive detail, the M15 is slightly but noticeably more detailed. The Cobalt reproduces low-end sounds better than either of the others and offers a similar level of audio detail.

The Questyle M15 may sound the best of the three, but it lacks the detailed audio playback readings offered by the other two, as well as the ability to tweak settings beyond a gain switch. The Cobalt doesn’t have any adjustment capabilities and only supports headphones with a 3.5mm connector.

The iFi Go Bar has the most configurability and would have the most detailed settings readout if the print on the dongle wasn’t so hard to read. It’s the same price as the Dragonfly Cobalt and $80 more expensive than the Questyle M15.

If you prefer the features and design of the iFi Go Bar, it’s an outstanding choice. The differences between the Go Bar’s audio quality and what you’ll get from the Questyle M15 or the Dragonfly Cobalt isn’t dramatic and, since all three are so good, your personal preferences might differ from mine.

The included case and iOS cable make this a strong value proposition for iPhone users, since the Dragonfly requires a $38 adapter and the Questyle M15 needs a $20 Lightning cable that’s not included with the DAC.

If only someone on the development team had raised a hand and pointed out how hard it is to read the printing on the device, the Go Bar design could have been fixed and we’d be looking at the best resolution readout we’ve seen to date.