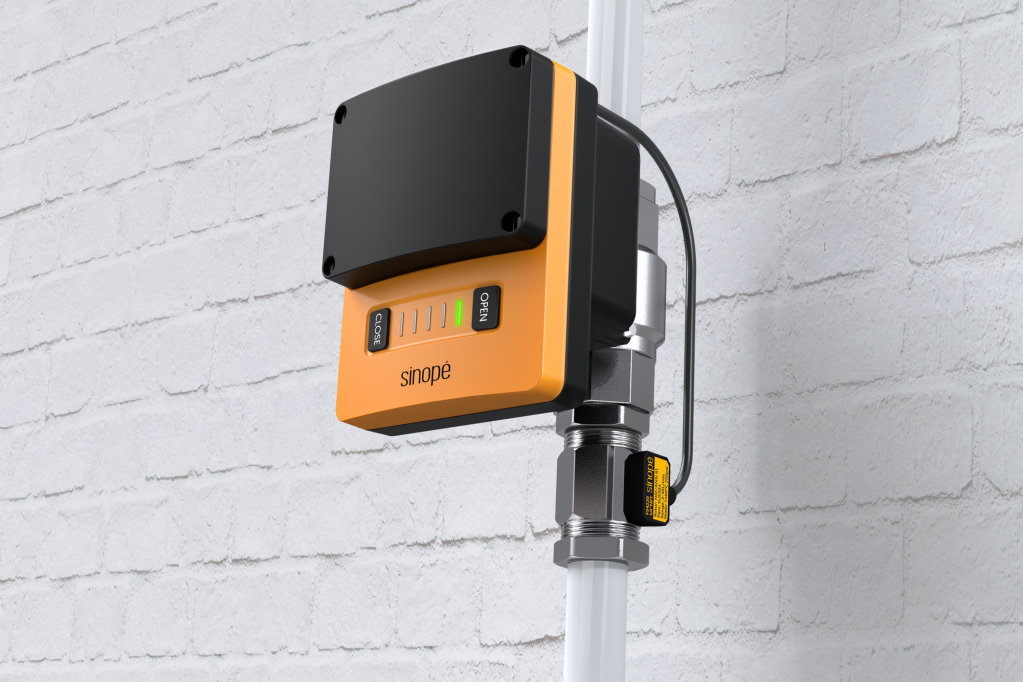 Sinopé Technologies
At a glance

We liked the first iteration of Sinopé Tech’s Sedna Smart Water Valve, which offered a fine compromise between price and protection. Our biggest complaints were the lack of a flow sensor and any kind of smart tracking for leaks and water usage. Sinopé’s second-gen device, model number VA4220WF, does a lot to alleviate those concerns.

The new Sedna isn’t a radical redesign of the earlier model, but it does feature support for Sinopé’s new flow sensor, which offers precise tracking of your home’s water usage and will alert you to potentially abnormal water consumption patterns. The valve works in concert with Sinopé’s remote sensors, which can identify actual water leaks. It’s still not as sophisticated as the Phyn Plus or Moen Flo, both of which utilize artificial intelligence to track water use, but it’s a significant improvement over the first-gen product.

You can purchase the Sinopé Sedna $256, or in a kit with five remote leak sensors for $470. Adding Sinopé’s 3/4-inch flow sensor to the package will add $42 to your bill. (There are also 1-inch and PEX configurations of each device.)

The Sedna combo doesn’t monitor your water pressure or water temperature, so it can’t warn you of the danger of freezing pipes. It also won’t attempt to guess when your washing machine is running or if you’re taking a shower versus watering your garden. It doesn’t ask questions to build a personal profile of your household’s water usage or give tips for meet your water conservation goals. On the other hand, it also doesn’t impose any subscriptions or other hidden costs to get the full benefit of the product.

Since I had installed the first-generation device myself, I didn’t pay much mind to Sinopé’s strong suggestion of having the new hardware installed by a professional. This led to a few DIY shenanigans on my part, although the result—albeit it three hours later—was ultimately successful. Part of the problem in my case is that the flow sensor is a separate component that needs to be added to the Sedna shut-off valve, so I was retrofitting an existing installation. New users won’t have that problem.

The new sensor adds 2.6 inches to the length of the entire assembly, which won’t matter all that much if you’re installing everything from scratch. Adding the sensor to an existing Sedna installation, on the other hand, can be problematic because you’ll now need a female connector on your main water line, so that the sensor can be installed ahead of the smart valve. For me, this entailed a trip to the hardware store to get a part.

Even though plumbing is my least favorite DIY home repair, this was by no means a major project. That said, there’s certainly no shame in calling a professional to do the job for you.

Once the plumbing is done, it’s time to move to the Neviweb app. Sinopé originally had a specific app for their smart sensor, but recently killed it in favor of integrating it into their overarching Neviweb control app. It’s worth noting that both initial app setup and adding remotes sensor requires physical access to the Sedna.

You’ll first remove battery panel cover, add four AAA batteries for backup, and follow the instructions in the app. The process was seamless and quick, except for the automatic update that begins immediately after setting the Sedna up. The app doesn’t immediately inform you this is happening, so I thought something had gone wrong. Once it did and another moment passed, the rest of the setup functioned perfectly.

Once the shut-off valve is installed and set up, you’ll set up the flow sensor in the app (it’s set to “off” by default). In the Sedna’s configuration menu, select the flow sensor and then tell it how to alert you to an “unusual flow” (your choices are text message and/or email, along with a push notification to the app itself). You can also opt to have the valve automatically shut off your water supply in response to a suspicious water flow.

The Sinopé flow sensor is an important addition

The addition of the flow sensor puts the Sedna on par with the other water-monitoring systems I mentioned earlier. The original Sedna’s biggest strength was its array of remote sensors leak sensor, which remain optional accessories with the Moen and Phyn products.

Sinopé offers different kinds of water sensors. There are a small boxy ones that sit on the floor, extension sensors with long cords for areas that might get submerged, and a brand-new “rope” perimeter sensor that can snake around corners, under appliances, or wherever you might want to monitor a larger area. Each of the sensors use a AAA battery and have excellent energy efficiency (the batteries from my original Sedna installation in early 2019 are still going strong).

The sensor’s still require physical interaction to pair with the smart valve. Once set up through the app, you’ll label each one to identify what it’s protecting and then inform the app how you want the valve to respond to a leak reading from each sensor. You can have the valve automatically shut off if your water heater springs a leak, for example, but just receive an alert if water starts dripping from the drain under your kitchen sink.

The leak sensors are remarkably sensitive and responsive, and the app alerted me via text messages and emails as soon as the slightest amount of water was detected. The remote sensors are also equipped with a local alarm and will beep when set off, so you don’t even need to have your phone at hand if you’re home when a leak starts. The whole system worked flawlessly and reliably.

Unlike the competition from Moen and Phyn, Sinopé’s Neviweb app can control the entire Sinopé smart home ecosystem, which includes everything from smart dimmers, smart outlets and smart plugs to Wi-Fi thermostats. Plug your dishwasher into one of Sinopé’s smart plugs and set a Sedna water sensor under it, for instance, and the system will not only shut off the water supply if a leak is detected, it will shut off the power to the dishwasher, too.

Install one of Sinopé’s smart switches in your wall, and you can configure it to shut off the Sedna smart valve with a double tap. Sinopé’s devices are also compatible with Amazon Alexa and Google Assistant, so you can control them with voice commands.

The Sinopé Sedna provides leak detection you can count on

While the Sedna isn’t as sophisticated in tracking water usage as its two biggest competitors, it offers a degree of smart home integration that’s more complete than either of them. The ability to turn off your main water supply with a double-click on Sinopé’s smart light switch is particularly appealing—assuming, of course, that you’re willing to go all in on Sinopé’s smart home ecosystem.