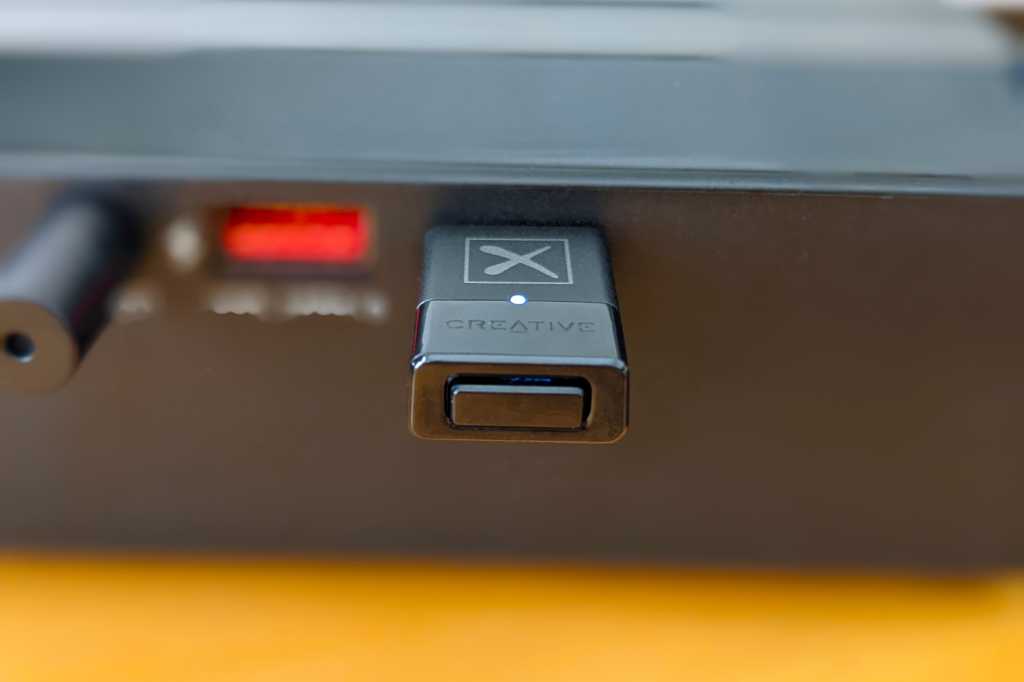 If you’re tired of laggy Bluetooth and poor microphone quality, the BT-W4 will take things up a notch. That said, you’ll need receiving devices that support aptX Adaptive to reap the full benefits.

Bluetooth can make for a liberating listening experience, but older setups may suffer from limited range and–worse–high latency, resulting in distracting lip-sync problems when streaming movies or TV shows.

If you’ve been noticing choppy or laggy Bluetooth performance, it might be time for something like Creative’s new, state-of-the-art $50 BT-W4 USB transmitter. In the BT-W4’s case, “state of the art” means the Bluetooth standard 5.2 and Qualcomm’s aptX Adaptive codec, a combination that can deliver greater range, higher fidelity, and lower latency.

Of course, you need the same tech on the other end to really take advantage of the latest Bluetooth standards and Qualcomm’s audio codecs, but we never said upgrading your Bluetooth setup would be easy–or cheap.

How does the Creative BT-W4 connect to a computing device?

The BT-W4, like its BT-W3 and BT-W2 brethren, looks similar to a wireless mouse/keyboard dongle. It’s USB (Type-C with a C/A adapter) and behaves like an audio interface on your computing device.

There are no audio inputs, which means the BT-W4 won’t help you with most TVs and stereos, as they don’t generally support class-compliant audio devices. However, when I say computing device, that does include the PlayStation 4 and 5, as well as the Nintendo Switch. Creative includes instructions for use on those devices.

What version of Bluetooth does the Creative BT-W4 support?

As I previously mentioned, the BT-W4 supports Bluetooth 5.2, with a data transfer rate up to 3 Mbps and an unobstructed range up to 165 feet. (There is a Bluetooth 5.3 spec now, but it’s more of an incremental upgrade.) The dongle also supports SBC, the default Bluetooth audio codec, as well as Qualcomm’s aptX and aptX Adaptive codecs.

If you’re not familiar with the aptX Adaptive, it’s the latest of Qualcomm’s Bluetooth audio codecs. aptX Adaptive includes and/or upgrades all the key features and benefits from the company’s previous aptX efforts, including low latency, high resolution audio (up to 24-bit/96kHz), and adaptive data rates.

Qualcomm says aptX Adaptive is “designed to be backwards compatible with aptX- and aptX HD-supported devices”. Talking to the company, aptX Adaptive should indeed fall back to aptX HD for devices that support the older codec, although there’s been some scuttlebutt countering that claim. In any event, it’s possible the connection for some devices may revert to plain aptX.

“Adaptive” means that the codec will alter the transmission rate according to signal strength–hopefully maintaining undistorted, smooth playback when the signal weakens, albeit at perhaps not as high quality. Trading quality for range and vice versa is something built into the Bluetooth 5.0 spec, which is no doubt what Qualcomm is leveraging.

The BT-W4 will automatically link using the best protocol available, and it will also let you know which protocol it picked. A small LED on the logo side of the BT-W4 will glow blue if it’s using SBC, green if the codec is aptX, and purple if it’s aptX Adaptive.

What kind of controls does the Creative BT-W4 have?

On the end of the BT-W4 is a multifunction button that (depending on whether you long-, single-, or double-press) allows you to pair, switch between up to four devices, or enter hands-free mode (a.k.a. Hands-Free Profile, of HFP).

As to that hands-free mode, Creative bundles a mini-microphone that plugs directly into your headset/audio jack. The mini-mic is TRS (tip/ring/sleeve), though there’s no pass through as the mic occupies the end of the apparatus. The mic shows up in your audio device list as an input (the name will vary according to where you plug it in). You might prefer the Creative microphone, but you can still use the headset’s microphone for HFP if you so desire.

Note that HFP doesn’t use the loftier aptX codecs, just the lesser two-way codec that’s part of the profile.

How good is the Creative BT-W4’s performance?

The BT-W4 paired with all four headsets quickly, chose the optimal codec automatically, and switched quickly between those already paired at a press of the button (as previously described). It made the testing process quite easy.

In terms of sound quality, all the headphones sounded good whether connected via SBC, aptX, or aptX Adaptive. I might give a slight sonic edge to the Edifier and aptX Adaptive, but I have no idea what the connection rate actually was. The distance was only a few feet to this phase of the testing, and most of the source material was 16-bit/44.1kHz, so I’ll assume I was getting optimal throughput. The Edifer is an outstanding-sounding headphone no matter what the codec.

Note that while aptX Adaptive supports 24-bit/96kHz, Creative only claims 24-bit/48kHz streaming. Faster sampling rates have their uses internally for processing and can reduce latency, but they otherwise do not increase playback sound quality, especially when being compressed by a Bluetooth codec.

Latency was an issue with the three headphones that didn’t support aptX Adaptive. I had to dial in from 130 to 150 milliseconds of audio compensation for the VLC media player to get dialog and sounds to sync up.

With the Edifier Stax Spirit S3 headset and aptX Adaptive, dialog lag was much less pronounced. If I was being super picky, I might’ve pushed the audio forward perhaps 20 to 40 ms (I did so for testing), but while listening to some rock and roll or watching Master and Commander: Far Side of the World, I honestly didn’t feel the need.

What’s the Bluetooth range of the Creative BT-W4?

In terms of range, aptX Adaptive was clearly superior in my tests, if only by a little over aptX and SBC. I managed to make it outside my front door with the Edifier’s still connected, whereas the older, non-aptX Adaptive headsets started failing before I breached my entryway.

On the sidewalk in front of my building, the difference was more pronounced, with Bluetooth 5/aptX Adaptive providing perhaps another 20 feet over plain aptX and SBC.

What was a bit surprising is that aptX Adaptive seemed to fail in the same way as the other modes: with dropouts as I hit maximum range. I didn’t notice any drop in quality before these occurred. Interpret that as you will; it could’ve been my ears, but don’t be surprised if you notice the same behavior.

The mini microphone sounded very good, but its volume can be limited by its placement. Obviously, this will vary by where each device places its jack. On my test setup, it was about 18 inches away with the mic facing me and signal strength was adequate if not optimal.

The bundled the mic will work best with gaming controllers, where it will already be close to your face. You might consider a 3.5mm TRS male-to-female extender cable if your jack is in an odd or out-of-the-way location.

With all said and done, I was impressed with how easy it was to set up and use the BT-W4, as well as its quick connections and overall sound. The BT-W4/Edifier Stax Spirit S3 combo made movie-watching close to lag-free, even in media players without audio sync compensation.

Is the Creative BT-W4 worth the cash?

If you’re tired of working with sub-par Bluetooth implementations–and the computer world is rife with them–then the BT-W4 will make for a solid upgrade.

Just remember that it takes two to tango; without aptX Adaptive (or possibly aptX HD ) on the other end, you might still experience lag, range, and quality issues.