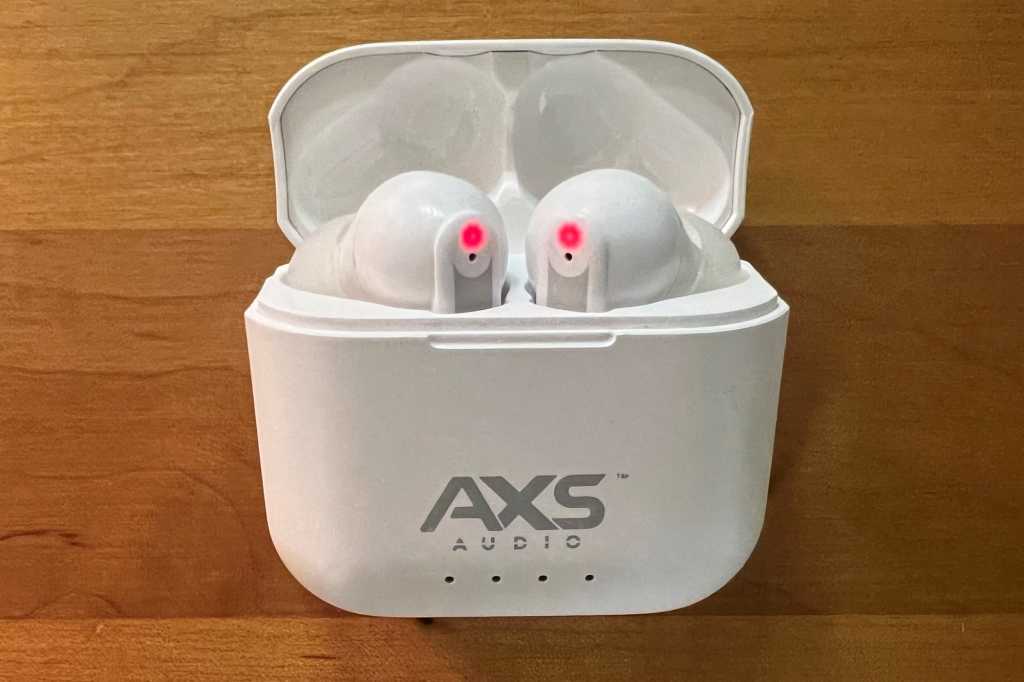 The AXS Audio earbuds are designed by a team with definite ideas about how music should sound, and they emphasize faithful reproduction of original source material over the amped-up bass and sound processing that many competitors use to create a more “immersive” experience.

The team behind AXS Audio are a brave lot. They’ve debuted with a single product in one of the most competitive and price-sensitive corners of the audio market. The AXS Audio Earbuds noise-cancelling earbuds are up against stiff competition

AXS Audio was founded by Rikki Farr, a legend in the live audio business who may be best known as one of the promoters of the 1970 Isle of Wight music festival, which led to his excellent onstage rant captured in the documentary film about the concert. He later founded Electrotec, one of the world’s premiere live sound and lighting companies, and the tour production company International Touring Services (ITS). Anyone’s who’s worked in the live music business over the past few decades has benefitted from his role in developing the massive live PA systems we enjoy today.

This review is part of TechHive’s coverage of the best noise-cancelling headphones, where you’ll find our top picks plus in-depth buying advice for anyone shopping in this product category.

Anyone who’s good at math has already realized that Farr must be a pretty old guy at this point. He’s 84 years old at the release of these earbuds and is credited with personally tuning their sound. We should all hope to have such fabulous hearing at his age, because these in-ear headphones sound great.

Farr was previously involved with the Bluetooth speaker company RIVA Audio alongside his AXS partner Don North, a speaker engineer with experience at Harman and Boston Acoustics. When you consider the excellent reviews that RIVA speakers earned, it’s not a huge surprise that AXS also delivers on the audio front.

What AXS Audio has done is pour all its efforts into sound without giving as much attention to how these earbuds look. At first glance, they strongly resemble the gas-station-knockoff AirPods that sell for around $20. They’re so much better than they look, so let’s dig into the details.

The AXS earbuds offer 10 hours of battery life, which extends to 38 total hours with the additional power in a fully charged case. The case will hold a charge for 138 hours in standby mode. AXS supports both wireless and fast USB-C charging.

The earbuds use Bluetooth LE 5.2, which AXS promises will deliver high-definition stereo for lossless music playback. They offer active noise cancellation with dual microphones that lower ambient noise by 25db.

Along with the earbuds and case, AXS provides a USB-C charging cable and six pairs of hypoallergenic ear tips (two sets each in small, medium, and large). The earbuds are available in either a satin black or satin white finish.

Aside from the audio, the most impressive feature of the AXS Audio earbuds are the capacitive touch controls. Touch controls are often the absolute worst feature on headphones, whether they’re in-ear monitors or over-ear models. AXS has created touchpads on each earbud that are both a different color and a different texture than the rest of the stem. There’s also a tiny lip at the bottom of the touchpad that makes it even easier to locate by touch.

These touchpads are so good that I won’t complain about the absence of physical buttons; in fact, the touch target is so easy to identify by feel that I’ll go further and say this approach is just as good as having physical buttons on the earbuds.

Two taps on either earbud play or pause the current track. Three taps on the left go to the previous track, while three taps on the right skips to the next track. A two-second press on the left-hand earbud activates Siri on an iPhone or Google Assistant on an Android device. A two-second press on the right-hand touchpad switches between ANC on, ANC off, and voice-through mode. Each of those settings gets its own voice prompt.

The AXS charging case is a straight-up Apple knockoff, slightly taller than an AirPods Pro case and a bit shorter than a standard AirPods case. Since the AirPods cases are outstanding, that’s not necessarily a knock unless you insist on a unique design and want to avoid appearing to use Apple at any cost. Of course, this resemblance is most pronounced if you choose white instead of black.

The stems on the AXS Audio earbuds also echo the original AirPods and the thousands of knockoffs that have followed in their wake. In recent times, most audiophile headphones have aimed to be as small and unobtrusive as possible, and stems are increasingly difficult to find on in-ear headphones that cost more than $100.

Considering the attention to detail when it comes to audio tuning and controls, it seems likely that the stems are a conscious design decision. Stems do make it easier to handle earbuds, locate one when you drop it, and generally make life easier for anyone who’s the slightest bit clumsy. While most users might see the stems as dated, I really enjoyed stems after several years (and a few dozen headphones) without them.

These are most definitely earbuds consciously tuned to someone’s taste. They’re not trying to be everything to everyone, putting an emphasis on midrange frequencies without losing the high end. Bassheads should probably look elsewhere, but there’s plenty of bass for detailed listening that mirrors the mixes on the original source.

The most delightful thing about the AXS Audio earbuds is that they sound virtually the same whether or not you’re using ANC. Too many headphones sacrifice audio on the altar of silence and deliver a distorted experience with the ANC turned on. That weird sucking sensation that ANC can generate may or may not be real, but noise cancellation can create an incredibly fatiguing experience. I experienced zero ANC fatigue with the AXS Audio earbuds and they’re so light that they’re comfortable to wear for hours.

The tuning is remarkably neutral for earbuds, as if the designers decided they were not going to compensate for imagined use scenarios and just deliver the music in as direct a fashion as possible. Listening to the excellent new “Westbound Beats” compilation on Qobuz, which features contemporary remixes of funk songs from the classic Westbound Records catalogs by The 45 Kings, I was impressed by the discrete separation of instruments (especially sax and guitar) in the midrange. The AXS buds sound particularly good at low volume and the slight roll-off in the highest frequencies prevent that piercing whine prevalent in so many custom-tuned in-ear headphones.

AXS Audio isn’t artificially pumping up the bass. I’m currently testing the 1More EVO wireless headphones and the Edifier NeoBuds S headphones and each features different approaches to a louder bass profile that yields a much different listening experience. The AXS philosophy is for a far more neutral presentation, which is either a massive strength or a relative weakness depending on your perspective.

You don’t get an app that allows you to adjust the EQ. Aside from your ANC on/off choice, you’ll get a sound profile that matches the one devised by the ears at AXS. Fortunately, that’s a very good one if their approach matches your taste.

AXS is a small company run by people determined to share their perspective on how music should sound. They’ve tried to deliver a product that offers the best audio quality at a reasonable price point and might have sacrificed a few design and finish options to keep the emphasis on the audio. If my description of their sound quality piques your interest, AXS offers a 30-day money-back guarantee when you order the earbuds direct from the company’s website.