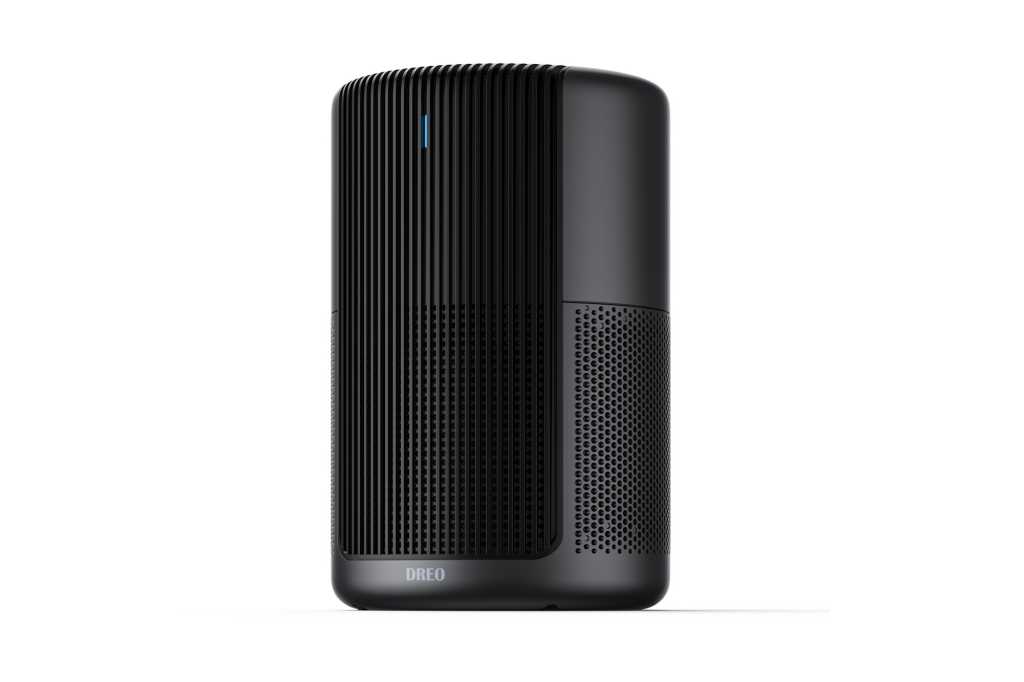 As an all-black cylinder with a recessed light situated among its vertical grilles, Dreo’s Macro Pro True HEPA air purifier has a particular design conceit that you’ll either love or hate. At the very least, it’s a big change from the armada of all-white cylinders that dominate the purifier market. When it comes to actual operation, you’re not getting anything that stands out from the crowd.

This small air purifier—weighing just 7 pounds and measuring 15 inches tall and 10 inches in diameter—offers CADR (clean air delivery rates) of 183 cubic feet/minute for smoke, 175cfm for dust, and 204cfm for pollen. Air is pulled in at the base, 360 degrees, run through a small, cylindrical, combo carbon and HEPA H13 filter, and emitted upwards from the top of the device. While the Dreo Macro Pro specifies a suggested range of 283 square feet, the maximum supported space is a whopping 1,358 square feet, although in a space of that size, changing the air will take a full hour. Filters are rated to last 6 to 8 months, and replacements run $30. Those are all solid specs given the price tag for the unit.

Note that there are no smart or wireless features on this purifier. All controls are top-mounted on the device itself. They’re largely self-explanatory, including three power level options plus an auto mode and a fourth-gear “turbo” mode, a sleep mode to minimize noise and dim the lights, and a child lock button. A countdown timer toggles among 2, 4, and 8 hours until auto-shutoff.

Additionally, the Dreo does feature a pollution level indicator that offers a color-coded representation of PM2.5 levels at a glance. Four light levels—blue, green, orange, or red—give a rough estimate of conditions, but these aren’t detailed beyond that.

The unit is very quiet at low levels but naturally ramps up as you increase the power. The turbo mode is appropriately named—ultra-powerful—and won’t be a good fit in most residences unless you have a true air-quality emergency to contend with.

The only real downside with the Dreo purifier I found is that it does lend a certain plastic smell to purified air, even though there’s no ionizer included, a common culprit when it comes to off aromas. This blows off a bit over time, but I found it was still detectable even after a few days of testing. Long-term testing would be required to determine how chronic and lasting the issue is.

This purifier lists for $150, but at press time it’s running just $107 on Amazon (at least in black; a graphite model is running at list price). If the style works for you and you don’t require smart features, it’s worth considering.