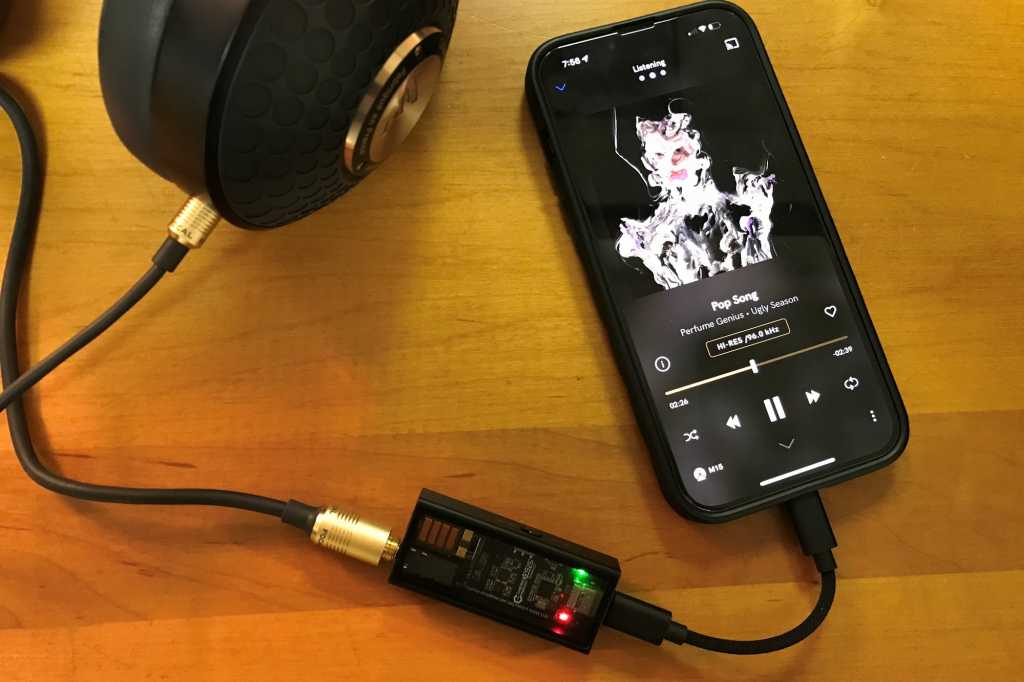 A high-performance DAC is essential for hi-res music streaming, and the Questyle M15 delivers exceptional quality at a lower price than the competition.

A DAC is a device that takes over the digital-to-analog audio conversion from your phone, tablet, or computer. A great one–like the Questyle M15 reviewed here–will produce sound that’s orders of magnitude better than what your iPhone or Android device can deliver on its own.

But there’s a tradeoff: A portable DAC/amplifier combo will inevitably complicate a streamlined everyday carry because you’re adding a device, adapter cables of some kind, and wired headphones. Why bother with all that? Bluetooth doesn’t have the bandwidth to deliver a true lossless hi-res stream, and anything less is a compromise.

That makes wireless headphones a tradeoff. If you’re listening to a lossy stream from Spotify and like what you hear, there’s no reason to investigate the investment and hassle of a dedicated DAC. That doesn’t mean a good DAC won’t improve the quality of a lossy stream, but you’ll be devoting too much firepower for the limited improvements possible.

The math changes a bit once you get to the lossless (aka “CD quality”) streaming that’s become the minimum quality available from streamers like Apple Music, Tidal, and Qobuz. Most wireless Bluetooth headphone users will easily be able to hear the difference between a lossless stream from the lossy streams from Spotify or YouTube Music Premium. And the gap between Bluetooth and DAC listening becomes even more pronounced at this level.

Where you really begin to hear the difference is with the hi-res audio tracks that are included with an Apple or Amazon music subscription or with the higher tiers offered by Qobuz or Tidal. That’s where a dedicated DAC starts to shine. You’ll never hear the detail available from these masters unless you’re using a dedicated DAC.

What components are inside the Questyle M15?

The Questyle M15 is dead simple to use. Once you plug into your source device and plug in your headphones of choice, there’s only a gain switch to set the M15 to work with either low- or high-impedance headphones. There are two jacks, one for 3.5mm unbalanced and one for 4.4mm balanced headphones.

The Questyle M15 measures 2.43 x 1.07 x .5 inches D (LxWxH) and weighs around one ounce, about the same size as a pack of chewing gum. Its machined-aluminum housing gives a sense of heft to something so small and light.

That’s less specific detail than you’ll get from the more expensive AudioQuest Dragonfly Cobalt or iFi GO Bar dongles. If you’re obsessive about knowing exactly what signal is coming from your source device, there are other options to consider.

The Questyle M15 comes with a USB C-to-USB C connector cable for current Android, laptop, and iPad Pro devices. A USB C-to-USB A cable is provided for use with older computers.

Apple users who buy from Questyle will want to include the extra iOS adapter for an additional $20. One of the great joys in using the M15 with an iPhone is the slimmer profile that comes from not having to use the Apple Lightning to USB 3 Camera Adapter required for AudioQuest’s outstanding Dragonfly DAC and headphone amp combos.

The device comes with a drawstring bag, but anyone who wants to protect the M15’s finish will want to add a leather case in either black, brown or red. It’s available as a $25 add-on when you purchase direct from Questyle.

Listening to the Questyle M15

Hey Doll Baby, a new compilation by The Everly Brothers, was released on baby blue vinyl for Record Store Day but also released as a 192kHz hi-res stream on Qobuz and a hi-res lossless Apple Digital Master on Apple Music. No matter how good your turntable setup might be, it’s not going to deliver the nuance and detail you’ll hear listening to “Cathy’s Clown” through the M15 and the Carbon IEMs. The sound is truly spectacular and a testament to what can be accomplished when remastering classic recordings from the original tapes.

A contemporary recording like the new Perfume Genius album Ugly Season, which is streaming at 96kHz at Qobuz, might be even more impressive. Composer Mike Hadreas explores frequencies from high to low in ways that could never have been reproduced in the vinyl or even CD eras. The exquisite details in these songs only reveal themselves when processed by something like the Questyle M15. A subsequent listen via Apple’s Lightning-to-headphone adapter is a massive comedown.

If you’re a Tidal fan, the Questyle M15 does a great job with the service’s MQA encoding. The new Beyoncé single “Break My Soul” is streaming as a MQA master at Tidal but as merely a lossless track on Qobuz and Apple Music. The Tidal stream sounds better than the others by a considerable margin.

The Questyle M15 is fabulous for critical listening

Not everyone hears much of a difference between lossless and hi-res streaming, but a quality DAC is an essential purchase for anyone who can. If that difference doesn’t seem like a big deal to you, a Bluetooth receiver for your home system and an excellent pair of wireless headphones are all you need.

If you’ve invested in quality wired headphones, the Questyle M15 offers stunningly detailed and neutral sound with almost zero background noise. Its sound compares favorably to AudioQuest’s flagship Dragonfly Cobalt and costs about $80 less before considering any adapters that iPhone users will need. If you’re looking to make the commitment to hi-res audio, the Questyle M15 will make an excellent link in your wired audio chain.