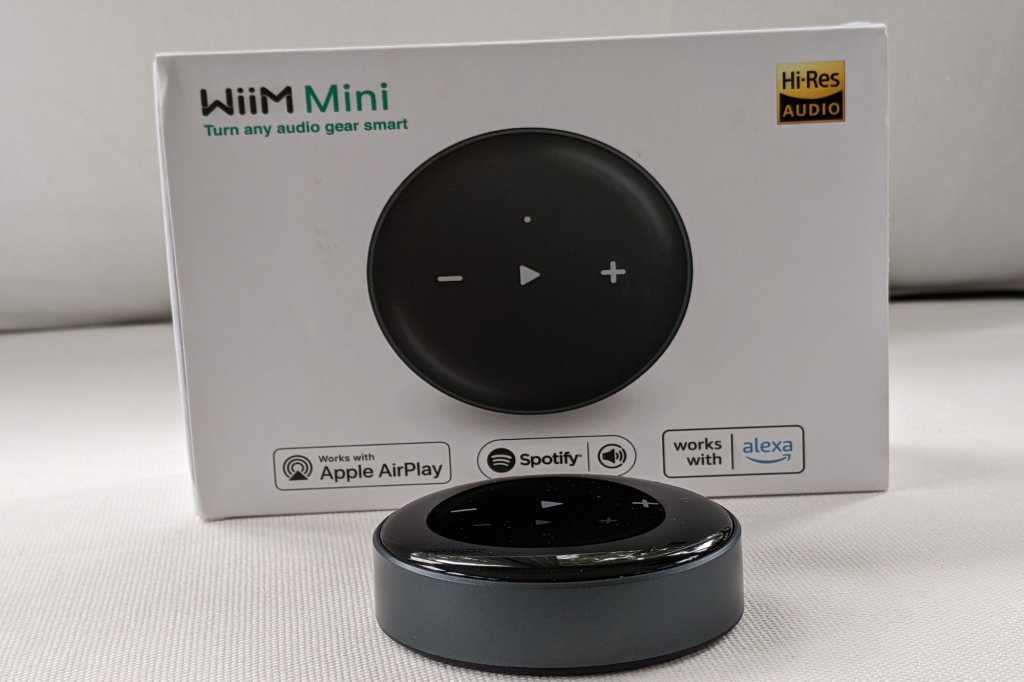 The WiiM Mini is a must-try device as an affordable entry into high-resolution music streaming. Airplay 2 and voice control make it a complete package.

Several months and firmware updates later, the $99 WiiM Mini has become a legitimate entry-level audiophile network player, though still developing, while satisfying most basic streaming needs. That includes multi-room music over Wi-Fi with AirPlay 2 or Amazon Echo devices, voice control (via Alexa or Siri), Bluetooth 5.2, and support for Spotify Connect and Tidal Connect.

Qobuz and Amazon Music are also among the streaming services built into the app, with Apple Music and YouTube Music the notable absentees. You can also play music stored on your phone or home media server.

The WiiM Mini has everything, and more, than the dearly departed Chromecast Audio–except for Chromecast support.

The WiiM Mini is a better streaming puck

Linkplay Technology is an unfamiliar name whose modules are found in more familiar low-cost streamers, including the Andover Songbird and Audioengine B-Fi as well as lesser-known models from Arylic, Taga Harmony, and Hall Audio. Linkplay’s hardware and app are also built into a Yamaha soundbar, Harman and JBL Alexa-enabled speakers, and some Marshall Wi-Fi speakers.

The Songbird uses a previous-generation Linkplay module that supports up to 24-bit/192kHz streaming, yet downsamples all higher-resolution signals to CD-quality 16-bit/44.1kHz through its Toslink optical output, as is typical of most low-cost streamers.

Those days are over. WiiM added bit-perfect 24/192 and gapless playback via its Toslink output in February: It delivers digital signals up to that resolution exactly how they’re received. In late May, bit-perfect AirPlay 2 arrived at CD quality.

With the first notes of Bill Evans’ “Stella by Starlight,” from At Shelly’s Manne-Hole on Qobuz, a blue light emerged from my Chord DAC connected to the WiiM, confirming the track’s 192kHz resolution. (After a recent update, the resolution also displays in the WiiM app during playback.)

It doesn’t get any better in a $99 streamer. When connected to an audio system’s digital-to-analog converter, the WiiM accomplishes the same bit-perfect magic as the current de facto entry-level, high-end streamer, the $599 Bluesound Node. (Linkplay Technology also promises support for Roon, the high-end music management software, later this year.)

This type of product will recalibrate your music-streaming budget. If you don’t need a full-featured hi-res streamer like Bluesound’s Node, spend $99 on a WiiM and devote the rest of your budget to a quality DAC.

If you’re less interested in hi-res, use the WiiM’s no-frills onboard DAC and connect the analog output to your audio system or powered speakers. Or add a WiiM Mini (or two) to a multi-room setup using smart speakers or other compatible devices.

“To be honest,” says Lifeng Zhao, Linkplay Technology’s CEO, “we have no preference to encourage our users to use an external DAC. Instead, we very much like them to use the internal DAC. We’re doing some statistics to see the percentage between internal and external DAC usage.”

Inside the WiiM Mini

The WiiM Mini, a black puck measuring 2.7 inches in diameter, is so small that Linkplay could not fit one of its off-the-shelf modules. Instead, it built the equivalent of its A97 module onto a printed circuit board assembly.

The Andover Songbird uses Linkplay’s A31 module. The A97 has a more powerful processor (dual core instead of single core), double the memory (128MB), dual-band Wi-Fi (2.4- and 5GHz), and hardware security features. This is how the WiiM leaps ahead of the competition with 24/192 and AirPlay 2 support. The WiiM Mini has a high-quality Burr-Brown PCM5121 onboard, but that standard budget-streamer DAC is nearly a decade old now.

You’ll nonetheless do better even with a $100 external DAC, which is about what I paid several years ago for the Topping D30 that’s still sitting on my desktop with a pair of M-Audio powered speakers. As a quickie test, I played Kate McGarry’s “O Cantador” from Girl Talk at CD quality, streamed from Qobuz first directly from the WiiM Mini connected to the speakers, and then from the WiiM Mini to the DAC connected by a Toslink cable. It was no contest. McGarry’s voice immediately pushed much farther out from the speakers, and with greater clarity. Kurt Elling’s supporting vocals also became more prominent.

The WiiM Mini’s glossy black top has touch-sensitive controls for volume and play/pause, with an LED indicator for Wi-Fi, Bluetooth, and other status notifications. You’ll find all connections on the side of the device: 3.5mm auxiliary analog input and output, Toslink digital optical output, and a USB Type-C port for the power adapter. At the far end, you’ll see the microphone’s tiny indent. The WiiM has dual-band Wi-Fi, but no ethernet port.

My WiiM Mini did not come with a 5-volt power adapter–a consumer annoyance championed by smartphone manufacturers–but only because the distributor also ships the device to the European Union. The device comes with everything else you need, including a USB cable for the power adapter, a Toslink cable, a 3.5mm analog audio cable, and a 3.5mm-to-stereo-RCA cable for your audio system.

The WiiM Mini app: Haven’t we met before?

The WiiM app (iOS, Android) is a Linkplay Technology specialty: It’s the foundation for apps used by Andover, Audioengine, and many others. The Songbird app, in fact, works with the WiiM Mini. The WiiM app serves only as a remote control. All music is streamed from the WiiM device, not your phone.

Setup, using either Wi-Fi or Bluetooth, takes only a few minutes. Apple users can also configure a WiiM through the Home app, tapping the plus button and selecting Add Accessory/More Options.

The app has two primary menu items. “Browse” accesses your local library and music services. It’s also where you select WiFi, Bluetooth, or Line In. That stumped me because it seemingly belongs under “Device,” which contains all audio settings, presets, and alarms (yes, WiiM can wake you to Karol G).

For hi-res audio pushed to an external DAC, you must enter “Audio Settings” by first tapping “Device,” and then selecting the settings icon in the playback window near the top of the screen. Again, my impulse was to select the settings icon adjacent to “Device.” Though labeled “Settings,” it only contains boilerplate information like the user manual, FAQ, and firmware release notes.

Once you enter the correct settings, select fixed volume output, set the output level to 2Vrms and select SPDIF (Toslink) under SPDIF streaming quality. Under SPDIF, set the maximum sample rate and bit depth to match your DAC. Now press the “Play test audio” tab. If you hear sound from your audio system, you’re ready to stream to your audio system.

From there, it’s easy to see the WiiM app’s appeal–smooth integration with its marquee streaming services and easy navigation–though Tidal Connect and Spotify Connect allow users to retain the streaming services’ native apps as their remote. Qobuz, with rudimentary access in the WiiM app two months ago, now is missing mainly the ability to add a track or album to a current play queue.

That could be coming because you never know what will pop up in the WiiM app. A promising beta universal search function appeared recently that breaks down search results by streaming service. This could become a huge addition, as would a “Similar Albums” option that encourages discovery. But it’s still challenging to keep up with what works and what doesn’t with the WiiM. Zhao says Linkplay will supplement the FAQ with specifics on every way to listen to hi-res music using the device.

The theoretical possibilities of high-resolution are undeniable: An MP3’s highest quality has a data rate of 320 kilobits per second, a CD 1,411Kbps, and a 24-bit/192kHz file 9,216Kbps. High-resolution files are best equipped to replicate a recording artist’s performance. It all depends on the original source. Qobuz, for instance, says all its 24-bit albums use the original source and are not re-encoded from SACD.

Let your ears decide. With Tidal Masters now arriving to the WiiM Mini, users also will need an MQA-compatible DAC. My non-MQA Denafrips Ares II DAC plays most Tidal Master files now at 24/96. That made Qobuz my prime source for auditioning 24/192 music.

My snapshot analysis: It’s great having 24/192, but there’s not enough content right now that I’d miss it if it suddenly disappeared. The much more plentiful 24/96 content is the current sweet spot in high-resolution playback and justifies investing in a DAC.

Despite online reports of many happy users employing the WiiM Mini as a DLNA network player, it didn’t perform reliably in my main audio system, where I use Audirvana playback software and its remote-control app with a Mac Mini. Initially, music sputtered relentlessly. A WiiM Mini firmware update resolved that.

But then music might play for an hour or two before stopping. Finally, I contacted WiiM’s excellent tech support, which typically responds within a day or two. I had waited far too long. After the WiiM team analyzed my Audirvana logs, the Audirvana-Qobuz combination played without stopping in a 10-hour test.

“We’re checking the Qobuz-on-Audirvana and hope we can improve the experience,” says Zhao. “I know many audiophiles are using this software, so it’s important to have a good compatibility.”

WiiM continues to address user-reported issues like sputtering playback, most recently on Spotify, and Wi-Fi stability.

The WiiM Mini is recognized as an Echo/Alexa device in the Alexa app and as an AirPlay 2 device by your iPhone, iPad, or computer. I use a series of Echo Dots deployed around my home, each connected to an audio device, as a multi-room audio setup. The WiiM Mini quickly joined that party.

But AirPlay 2, with a digital connection, offers bit-perfect 16-bit/44.1kHz through the WiiM Mini. And AirPlay is the only way to access Apple Music, with voice control by Siri, via the WiiM Mini.

Here are two ways to get CD-quality streamed to an old-world audio system in your multi-room setup:

It’s throwback time: Apple discontinued both the AirPort Extreme router and AirPort Express base station in 2018, but it continues to support the latter. The Airport Express, Apple’s first audio streamer, uses an audio connector that combines a 3.5mm analog audio and a mini-Toslink optical digital transmitter. To use the optical cable that comes with the WiiM, add a mini-Toslink adapter that costs maybe $5.

This Chromecast user found two Airport Express–models with the power cord, not the original direct plug-in version, are AirPlay 2 compatible–in a basement storage bin. I updated both and connected them to DACs already in separate rooms. With an old iPhone and the Tidal app, I suddenly could play, at no additional cost, “Out of Nowhere” from the Bill Charlap Trio’s excellent Street of Dreams in four rooms at CD quality.

The takeaway: Multi-room audio need not be expensive.

Bottom line on the WiiM Mini

The WiiM Mini, months after its debut, continues to evolve. In recent days, WiiM added Amazon Music Ultra HD at 24/192. Tidal Master/MQA and Roon support are said to be coming soon.

For now, its bit-perfect 24-bit/192kHz makes this $99 device an astonishing value as an entry-level, high-end streamer. That it also serves as an all-purpose streamer and multi-room audio conduit only adds to its appeal.

What’s missing? How about a second WiiM model for Chromecast users (also with Airplay 2), with ethernet and both Toslink optical and digital coaxial outputs?

Well, here it comes: The WiiM Pro will arrive later this year at a $149 target price, says Zhao.