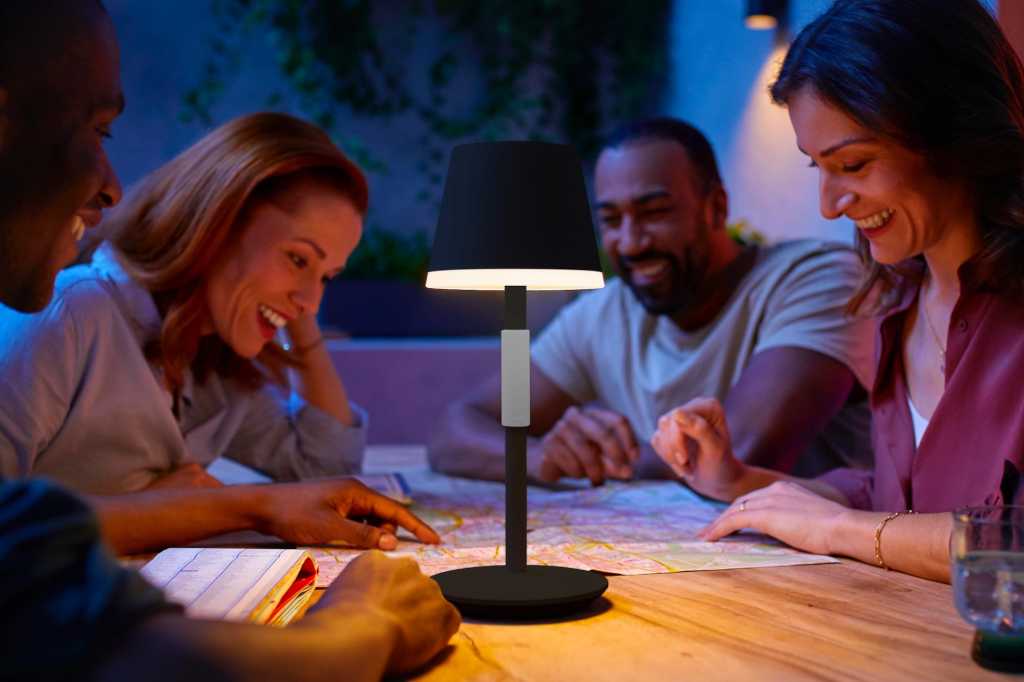 During a virtual briefing Monday, Signify-owned Philips Hue also unveiled a new version of its discontinued Tap switch, along with a colorful new “Sunrise” automation, a new Signe gradient floor lamp with an oak finish, and a series of next-gen downlights.

Slated for release in late summer for $159.99, the Philips Hue Go portable table lamp will arrive in both black and white flavors, and it has a translucent trim, metal construction, and a silicone grip about two-thirds of the way up its pipe.

The Go portable table lamp comes with a circular charging dock that begins charging the lamp as soon as it’s placed on the charging contact. (It’s worth noting that the lamp isn’t compatible with Qi wireless chargers.)

The charging base can give the Go lamp a full charge in about three or four hours, while the rechargeable battery can deliver up to 48 hours of battery life on the lamp’s dimmest setting, or about six hours on its brightest setting.

As with the bowl-shaped Go portable lamp (the second generation came out in 2020), the Go portable table lamp works over Bluetooth as well as Zigbee, and it’s also a white and color ambiance light, capable of glowing in up to 16 millions colors.

Designed for both indoor and outdoor use, the Go portable table lamp has an IP44 rating, meaning it offers protection from dust as well as water splashes.

Also coming soon is a new version of the eight-year old Philips Hue Tap switch, which was discontinued back in 2020.

Set for release today for $49.99, the Hue Tap dial switch has four buttons similar to the original Tap, albeit with a new design that divides the face of the switch into marked, clickable quadrants. Each button on the Tap can be assigned to any Hue light scene. The first Tap had three smaller circular buttons, while the fourth button was the face of the switch itself.

The biggest new addition to the Hue Tap dial is–you guessed it–a dial around the circumference of the switch, allowing you to dim the lights without pulling out your phone or using voice commands.

Philips Hue is adding a new wake-up routine designed to take advantage of its multicolor gradient lights. Instead of just slowly increasing the brightness of your lights, the Sunrise automation offers a “rich, colorful transition” from blue to soft orange light, and you can set it to last from anywhere from five minutes to an hour.

The Sunrise mode will work with Hue lights connected either via the Hue Bridge or Bluetooth, and it will also work with standard color ambiance and white ambiance bulbs, minus the gradient effect.

Meanwhile, the former Hue wake-up routines will be renamed “Fade to Bright,” and users of the mode will be able to upgrade to the new Sunrise automation by tapping the Edit button.

Alongside the Sunrise mode, Philips Hue announced a version of the Hue Signe gradient floor lamp with a new oak finish, available in mid-July for $349.99.

Next-gen updates for the Hue White Ambiance and White and Color Ambiance downlights will also be available for 4-inch cans ($49.99 and $59.99 respectively), and they’re rated for up to 850 lumens, up from 650 lumens.

A new demo mode is coming to the Hue app that will let you virtually test a variety of Hue lighting products, including entertainment and “feel more secure” themes. The mode will be available from the Explore tab, and Hue says it will be regularly updated with new themes.

Finally, a modular, consumer-friendly Hue track lighting system is bound for overseas regions, but not for the U.S. market.

Available in black and white versions, the Hue Perifo includes one-meter tracks as well as snap-in spotlights, pendants, and even gradient light tubes, and it can be powered by either in-ceiling wiring or via a power outlet.

A Philips Hue rep confirmed that the Perifo won’t be released in the States.