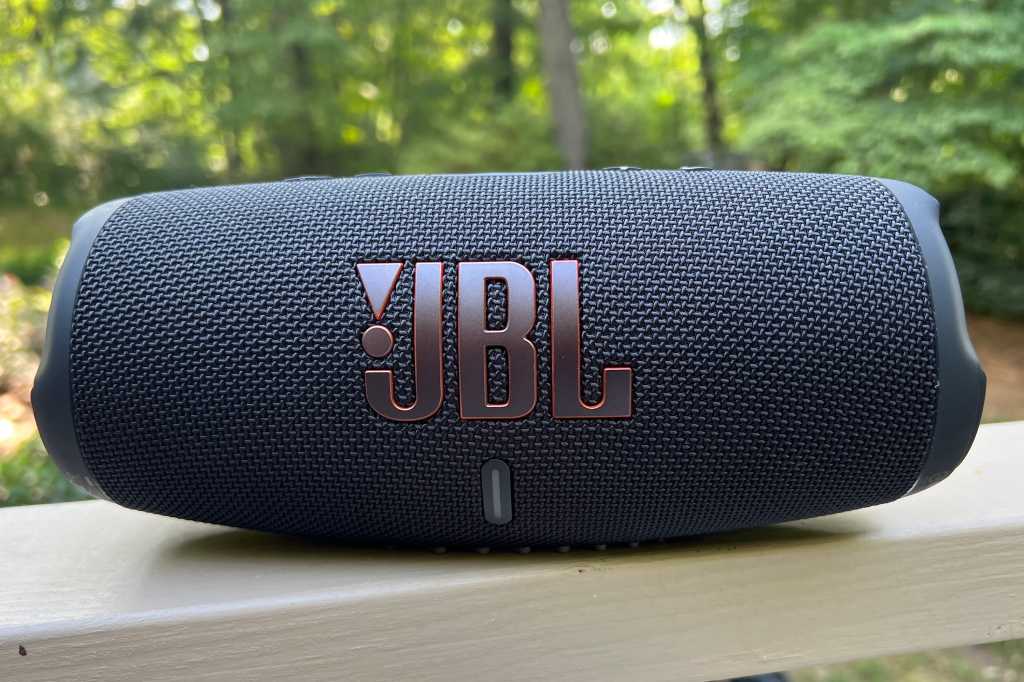 The JBL Charge 5 is a premium speaker that sounds great, has remarkably well designed controls, and boasts an iconic design.

Perched in the middle of JBL’s Bluetooth speaker lineup, the JBL Charge 5 surprises with its big sound. It’s incredibly loud for its size and far easier to stuff in a backpack than other footlong outdoor speakers. If you’re looking for a single speaker to use at home and on your outdoor excursions, it’s easy to find a spot for the speaker on a bookcase or tabletop.

JBL has embraced a single-use philosophy for the Charge 5. It’s a Bluetooth speaker, full stop. There’s no microphone, so it doesn’t double as a speakerphone. There’s also no AUX or USB input, so you can’t plug in another music source. All your audio must be streamed from a Bluetooth device, most likely your phone.

To be completely fair, it’s a slight oversimplification to say that the JBL Charge 5 is only good for one thing; after all, the speaker can also charge a second device via a rear USB charging port that’s hidden beneath a flap. But other than that, the Charge 5 is single-minded in its purpose.

The JBL Charge 5 doesn’t quite best our current Editors’ Choice for portable Bluetooth speakers, the Sonos Roam, which boasts Sonos’s vaunted multi-room capabilities, a rugged design, and Auto Trueplay room-correction functionality for roughly the same price as the JBL. That said, it was a close call.

How does the JBL Charge 5 look and feel?

JBL has revised the design for the latest version of the Charge speaker, enlarging the JBL logo and making it roughly the same color as the speaker while giving the sides of the raised letters an orange tint. The speaker ships in black, blue, camouflage, gray, red, and teal flavors.

The row of controls across the top of the speaker is raised and the PartyBoost (more on PartyBoost in a moment), volume down, volume up and play/pause buttons each have a unique shape, so it’s easy to access the controls in the dark. The power on/off and Bluetooth pairing controls are located on a smooth strip in the middle, but each control is easy to select because the shape of the logo is ever-so-slightly depressed into the strip. It’s an elegant and useful design touch.

The JBL Charge 5 boasts an IP67 rating for complete protection from dust ingress, and it should also withstand being dunked in a meter of water for 30 minutes. In other words, it should be able to survive a trip to the beach or even a dunk in the pool.

Which version of Bluetooth does the JBL Charge 5 support?

The Charge 5 supports Bluetooth 5.1 along with the A2DP 1.3 and AVRCP 1.6 streaming profiles. Output power is 30W RMS for Charge 5’s woofer and 10W RMS for its tweeter. JBL promises 20 hours of battery life, which matches my experience, and 4 hours for a full charge.

The Charge 5 supports JBL’s aforementioned PartyBoost feature, which allows users to pair with up to 100 speakers at once, including other JBL speakers like the Flip 5, Pulse 4, and Boombox 2 speakers. Unfortunately, PartyBoost doesn’t work with older JBL speakers (like the Charge 4) that use the now deprecated Connect+ protocol.

The good news is that anyone using the JBL Portable app for iOS or Android has the choice of using two PartyBoost speakers as a stereo pair instead of just cloning the mono output from the first speaker. The app also offers a basic equalizer that has studio-style sliders to control bass, mid, and treble frequencies. The app is also required for firmware updates to the Charge 5.

How does the JBL Charge 5 sound?

I’ve been using the Charge 5 as a general-purpose speaker over the past few weeks, streaming baseball games via the MLB app, audiobooks via Audible, my college radio airchecks that someone posted on YouTube, and playlists on Apple Music.

On Apple’s ‘60s Rock Essentials playlist, the Charge 5 consistently impresses. On songs like the Byrds’ “Mr. Tambourine Man,” the Charge 5 delivers exceptional detail and separation between voices and instruments, whereas lesser speakers tend to turn the midrange into an indistinguishable wall of sound.

On notoriously low-fi recordings like Question Mark and the Mysterians’s “96 Tears” and the 13th Floor Elevators’s “You’re Gonna Miss Me,” the Charge 5 doesn’t sand off the rough edges that give garage-rock classics like these their sonic teeth.

If your tastes run to more contemporary hits like those by Bad Bunny, Harry Styles, Kendrick Lamar, and Kate Bush, the Charge 5 sounds so good that I wouldn’t be surprised to learn that contemporary mix engineers use the JBL portables as reference speakers during their mix sessions.

It’s also worth noting that tracks from services that offer lossless streaming (such as Apple Music, Tidal, Qobuz, and Amazon Music) sound noticeably better on the Charge 5 than the lossy tracks available from Spotify or YouTube Music.

Is the JBL Charge 5 worth the cash?

The JBL Charge 5 is a Bluetooth speaker that can double as a powerbank for another device. That’s it. There are no racing lights, no speakerphone, and you can’t plug in another audio source. What you do get is a speaker that gets incredibly loud for its size without distorting, solid battery life, easy-to-use controls, and excellent protection against dust and water.

There are plenty of very good speakers that don’t offer the same fit, finish or volume that you get from the JBL Charge 5, and many of those cost a lot less. If you care about the subtle touches like the well designed controls and distortion-free sound that JBL has built into its entire line of speakers, then that extra money will be well spent.