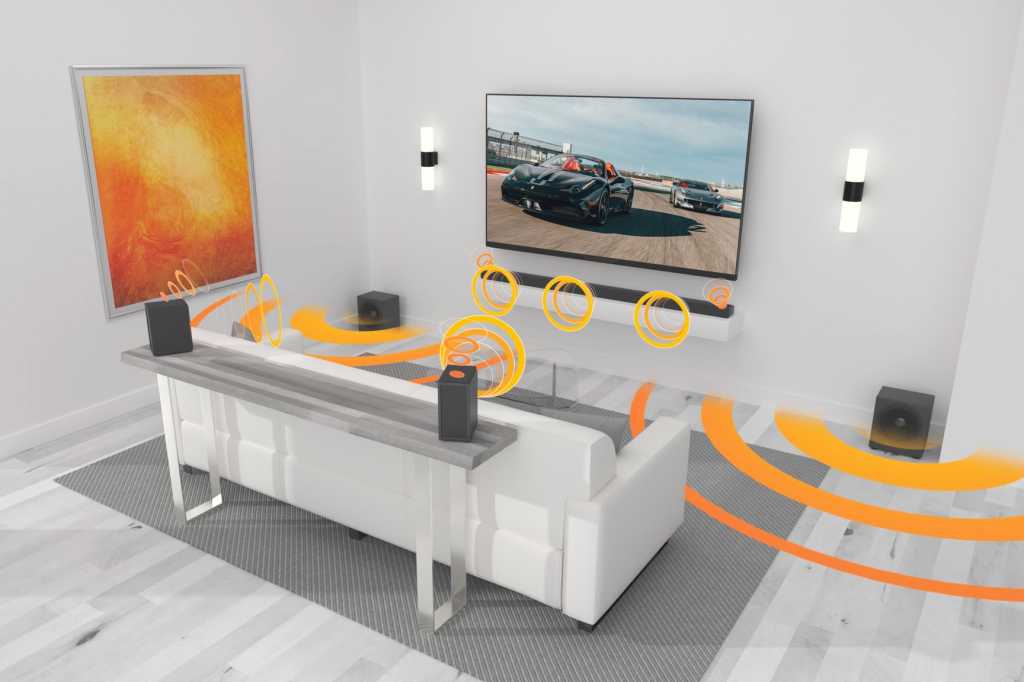 The latest DTS Play-Fi soundbars will be all about flexibility, allowing you to create configurations up to 7.2.4—complete with height channels for Dolby Atmos—simply by adding more Wi-Fi-connected Play-Fi speakers.

At the same time, DTS is announcing new capabilities for Play-Fi Home Theater TVs, including the ability to add stereo pairs of speakers or to use the TV itself as a center channel.

For soundbar users, DTS says you’ll soon be able to start off with a supported Play-Fi-enabled soundbar and then add more Play-Fi speakers as you go, allowing you to build a channel configuration all the way up to 7.2.4, good for a pair of subwoofers as well as four height channels for Dolby Atmos or DTS:X.

For example, you could start with the upcoming Philips Fidelio FB1 soundbar (which is slated to arrive later this year) and then add a pair of Philips Fidelio FW1 subwoofers and two FS1 front- and up-firing satellite speakers, which would make for a full-on 7.2.4-channel system.

Meanwhile, DTS Play-Fi Home Theater for TVs is getting more features, including the ability to create 2.0- or 2.1-channel setups with either a pair of speakers or two speakers plus a subwoofer.

Also new are “hybrid” configurations that will let you use either your TV speakers or a Play-Fi-enabled soundbar as the center channel.

While Play-Fi was initially designed for multi-room audio, DTS began a push into home theater for the platform beginning last fall.

DTS Play-Fi supports hi-res audio up to 24-bit/192kHz, and it boasts synchronized audio with less than 1ms of latency. The Home Theater flavor of Play-Fi supports Dolby Atmos and DTS:X, as well as IMAX Enhanced.