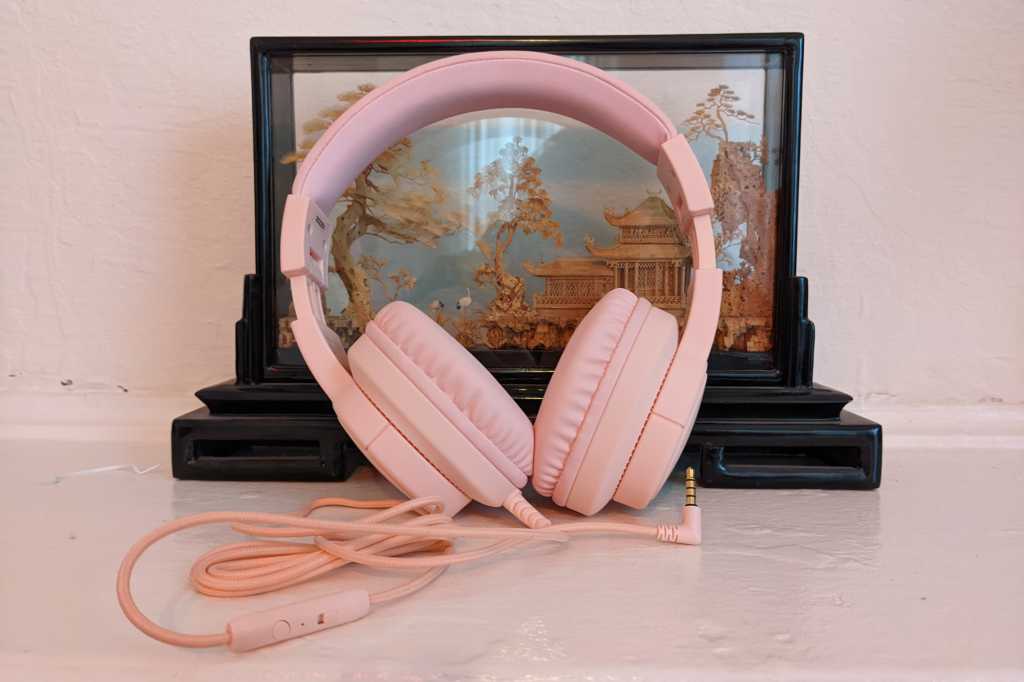 These wired headphones are an absolutely incredible bargain and would be at a multiple of the $19 price. Great sound, dB limiting, and excellent comfort for a ridiculous price.

First things first: The Starlet01 (Tribit’s model number TR-KH01) children’s headphones sound far better than a $19 headset (there’s a microphone) has any right to sound. Indeed, the sonics are comparable to many products costing five times as much. Even better, the Starlet01 are exceptionally comfortable. Color me impressed.

As for their color scheme: I’m claiming supreme sacrifice for wearing an off-pink headset around the house while testing The company didn’t send me the more masculine mint green headset, but I soldiered on. (The neighbors had a good laugh.) And if you’re a gender studies major, don’t bother–I don’t care.

Something you need to know right off the bat is that the Starlet01 is actually a headset with an inline microphone (and a dB switch) on the captive cable. Said cable is tipped by a TRRS (Tip/Ring/Ring/Sleeve) connector, so the microphone output is available to headset jacks. This will work fine on most cell phones (the ones that have jacks, that is), tablets, PCs, and similar hardware. But without a TRRS-to-TRS (i.e., normal stereo Tip/Ring/Sleeve) adapter you might have issues.

There is, however, a 3.5mm auxiliary connector on the opposite cup that can be used for normal stereo connections as well as daisy-chaining several Starlet01s. You’ll need to provide your own 3.5mm stereo cable. As you’re only spending $19 to begin with, you can afford good ones. (Make them long, unless you want a good laugh at the kids’ expense.)

Sadly, using the auxiliary port, you’ll lose the 94dB/85dB switch/resistor on the captive cable that limits the headphone’s output to 85db for child listeners. You might want to tape over said after setting it to 85dB, as any normally inquisitive child will monkey with it. Don’t tape over the multi-function button, however, because that’s used for phone calls (answer, hang up), as well as playback control (play/pause and track forward/back).

Like the similarly cheap ThinkWrite Ultra Durable Pro, the Starlet01 uses a straight cable with a braided cable. Unlike ThinkWrite’s product, however, this cable isn’t microphonic. That means bumping it or scraping against won’t create any noise in the headphones.

Performance of the Tribit Starlet01

If I’d heard the Starlet01 before I’d reviewed the ThinkWrite, I might’ve used weaker adjectives for the latter. While the ThinkWrite headphones sound very good, the Starlet01 sound as good or better. I’m sure that at least in part due to the non-microphonic cable. It’s close, but I’m calling it in Tribit’s favor because of the lack of microphonic artifacts.

As to the specifics of “sounds good,” I mean there’s a decent amount of bass and it’s tight, not floppy as with some cheapo cans. The mid-range is reasonably well defined, and there’s enough top-end that you don’t get the sense of dullness that so many cheap headsets suffer from.

The Tribit Starlet01 are not up to the standard of Marshall Major IV’s, or the Edifier Stax Spirits, but I had no problem listening to them for a good hour. Indeed, I found them more sonically pleasing than the headphones I’ve heard from major audio interface vendors in their podcasting packs. If I’m being picky, I’d like a tad more definition and instrument separation in the mid-range. But for 19 bucks? Sheesh.

There’s no wireless Bluetooth, so obviously no battery life to report. Revisiting comfort for a moment: There’s plenty of padding in both the ear cups and on the headband. Considering they’re sized for smaller ears and skulls, my feeling comfortable wearing them is a testament. There was just enough extension in the foldable ear cups to allow this.

I was absolutely astounded at the sound and comfort of the Starlet01, even with them being designed for smaller heads and ears. It would be nice if they put a TRRS-to-TRS adapter in the box, but $19? I’d buy these for any child in a heartbeat.