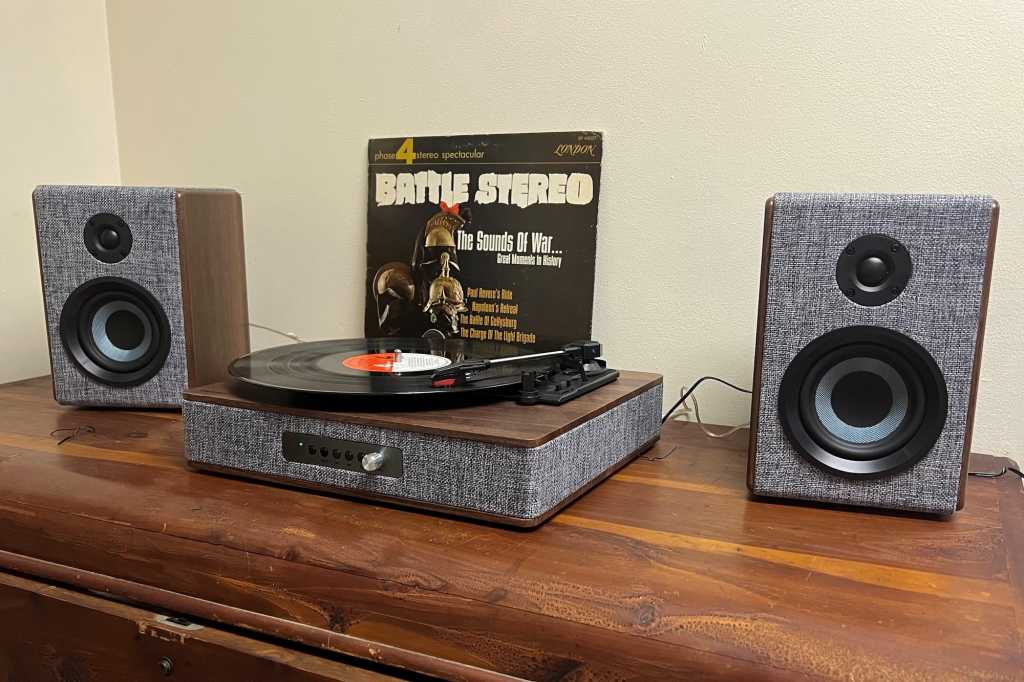 The Crosley Aria shelf system is a stereo unit—including a turntable—for first-time buyers. It’s easy to use and sounds far better than you’d expect at this price.

Crosley has played an important role in the recent vinyl comeback. Their entry-level turntables and record players have shown up in non-traditional retail outlets like JC Penney, Urban Outfitters, Bed, Bath & Beyond, and Wayfair as well as Amazon, making LP listening easy for potentially intimidated new customers.

On the flip, the Crosley brand gets trashed by a loud and persistent contingent of the audio crowd. Does low cost necessarily equal poor quality? We decided to test a Crosley and find out.

The Crosley Aria system is the modern version of those entry-level stereos from the 1960s and 70s that introduced boomers to record collecting. The design wouldn’t stand out in a collection of mid-century record players, with its combination of heather-gray fabric and walnut wood materials.

The system is made up of a turntable, Bluetooth receiver, and an FM radio. There’s a single 3.5mm AUX input if you’re looking plug in a cassette or CD player, but you might need an RCA-to-3.5mm cable to make that work.

The system is designed for absolute ease of use. The speaker wires are permanently attached to the speakers and terminate in red and white RCA jacks that are designed to be plugged into white (left) and red (right) jacks on the back of the turntable.

The turntable comes with 7-inch/45 rpm records with large holes and the turntable spins at 33-1/3-, 45- and even 78 rpm for vinyl records manufactured between 1898 and the late 1950s. There’s an auto-stop function that stops the turntable from spinning once the record ends. You get a lever to raise and lower the tonearm. You’re looking at basically everything you’d expect from a classic old-school record player.

If you’re in need of needle replacement, Crosley lets you order a replacement for around $15 via their website—or a 1-800 telephone number if you really want the full throwback experience.

To set up the Aria as a Bluetooth speaker system, there’s a Mode button on the front of the turntable unit. Press it until it’s flashing blue and then connect via your device’s settings. The Aria remembered the pairing, so it was easy to switch between Spotify streaming and vinyl listening.

There’s an FM radio feature, but it will be frustrating if you’re expecting a traditional radio experience. Press the Mode button until the light turns green, press the Play/Pause button to begin automatic scanning for stations. Once that process is complete, you can surf to various stations using the backward or forward Skip button to navigate to the preset stations. There’s no direct tuning, no ability to skip any stations you don’t want to hear, and the antenna only picked up a fraction of my local stations that have the strongest signals. There’s no option to plug in a better antenna.

The Aria system does not include a dust cover for the turntable, so users will have to remember to put their vinyl away after use and keep the platter clean. That’s obviously going to be a deal breaker for some buyers, but the company is delivering an all-in system for a price that would’ve been around $22 in 1972 dollars before inflation brought it up to $150 today.

The Aria system’s wired speakers allow for enough distance to offer far better stereo separation than what you’ll get with the company’s line of suitcase-style players. Crosley also offers the Coda system, which features a moving magnet cartridge, an adjustable counterweight, and a dust cover for around $269.

Part of the attraction of the Aria is that it’s a truly plug-and-play setup for anyone who’s just starting to investigate vinyl. Should you play your original 1969 pressing of Led Zeppelin II on a unit like this? Absolutely not. If you’re investing in $50 reissues of classic music titles, you should also be budgeting for a more elaborate turntable setup than this. An imprecise turntable will damage a record over time.

But the Aria makes an excellent, cost-effective option for the young listener who’s digging through a family member’s dusty collection or shopping in the dollar bins or at thrift stores. The system sounds better than most Bluetooth speakers available in this price range, so it’s like you’re buying a Spotify receiver and getting the record player for free.

The next generation of listeners needs a way to learn about audio and the Crosley Aria Shelf System isn’t a bad place to start.