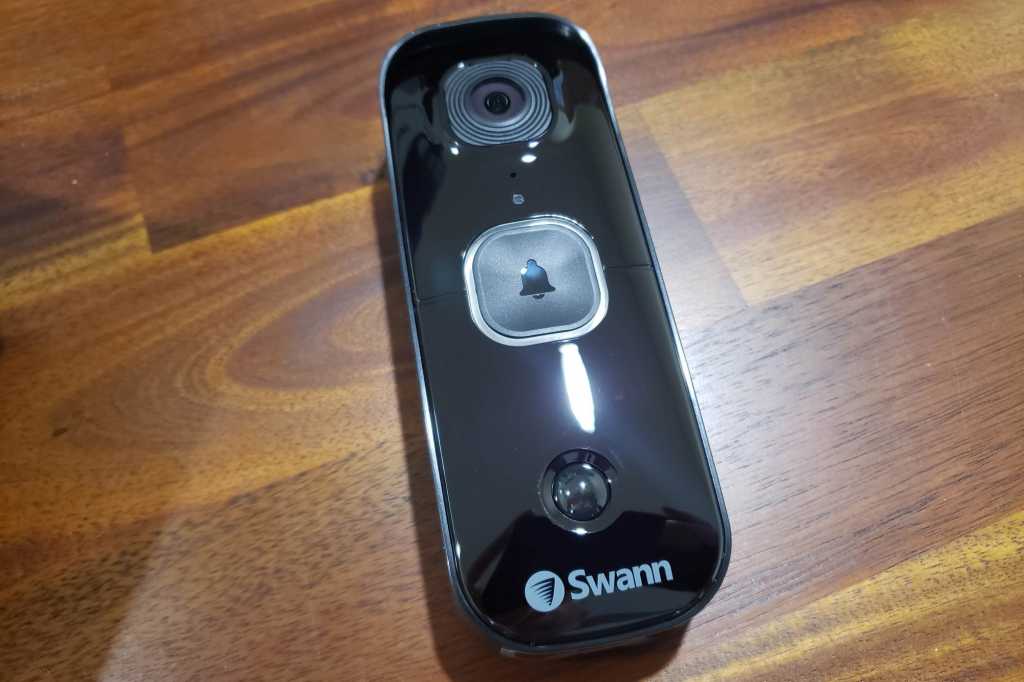 This isn’t a bad video doorbell, but there are too many superior alternatives for it to earn our strong recommendation.

Not Available
Free
View
Price comparison from over 24,000 stores worldwide

The SwannBuddy Video Doorbell boasts built-in video storage and the ability to run off batteries, with the option of using a household doorbell power supply to keep the batteries charged.

The device is a little bulkier than some competing models, although it doesn’t look bad. A camera sits at the top, the doorbell button is in the middle, and a motion sensor sits at the bottom.

The internal video storage is provided by a microSD card. A 32GB card is included, but the camera can accommodate cards with up to 128GB of capacity. This is a particularly useful feature as it negates the need for a monthly cloud storage subscription, although one is available if you want it.

Being able to operate the doorbell camera on battery power is great if you don’t have an existing transformer and low-voltage wiring in place. If you decide to wire it, the doorbell’s power requirements are 5V DC / 12-24V AC.

The doorbell worked well for me, but I struggled with a few issues.

The first was the speed of detection. It seems to take a couple of seconds for the camera to wake up from sleep and start recording, at least when battery powered, and that means the first little bit of footage of an event is sometimes missed. If someone walks up to your door and rings the bell and waits, this probably isn’t a big deal, but you might end up missing some action if someone walks past your door or turns around quickly.

My second criticism is with the video quality. The specification says its 1080p high definition, but it doesn’t feel that way. Perhaps the video compression is just too high, but it’s pretty blocky and doesn’t look great when zoomed in (this was on the maximum quality setting).

Take a look at the car in the image below. You can see the lines of the body aren’t even straight and forget about reading the license plate. This should be better.

Connecting to see a clip or live action also takes a little time. Again, this is probably because the doorbell remains in a deep sleep most of the time to conserve battery life. That’s a good thing–until it starts to impact functionality. We had a similar experience during our Swann Xtreem Wireless security camera review.

From launching the app, the fastest I experienced the live video appear was about 8 seconds—and often it took longer. When someone rings the doorbell, it takes a couple of seconds for the alert to appear, so the gap from the doorbell push to seeing live video can be 10 to 15 seconds, and that might be too long for some people to stick around.

The doorbell can be set to detect motion at four levels: close, medium, far, and maximum. It defaults to “close,” but I ended up setting it to “medium.” “Far” resulted in too many alerts, and “close” missed a few things near the doorbell. Heavy rain overnight also triggered it, as did the odd insect that flew too close to the doorbell.

If movement in a particular area is a problem, you can set a detection mask that restricts detection to certain areas of the image.

One of the SwannBuddy’s better features is a wireless doorbell chime that runs on a couple of AA batteries. That means it’s not restricted to a particular spot in your house and can be taken into a different room or perhaps outside should you be spending the day in the garden.

Getting the doorbell installed was easy. The first thing you need to do is charge the battery, unless you’re hardwiring it. That took a few hours but once it was done, getting it on my Wi-Fi network succeeded on the first try.

The SwannBuddy mounts next to your door by clipping onto a small bracket and is secured with a small screw to prevent it being stolen.

The SwannBuddy Video Doorbell failed to really wow with any of its features. There’s nothing particularly bad about it, but several things that could be better—especially the video quality and the delay in getting video in the app.

If you have an existing Swann security system, the SwannBuddy doorbell will come right up in your app and that might be a compelling reason to buy it. For others, we recommend evaluating other doorbells before making a choice.

Not Available
Free
View
Price comparison from over 24,000 stores worldwide