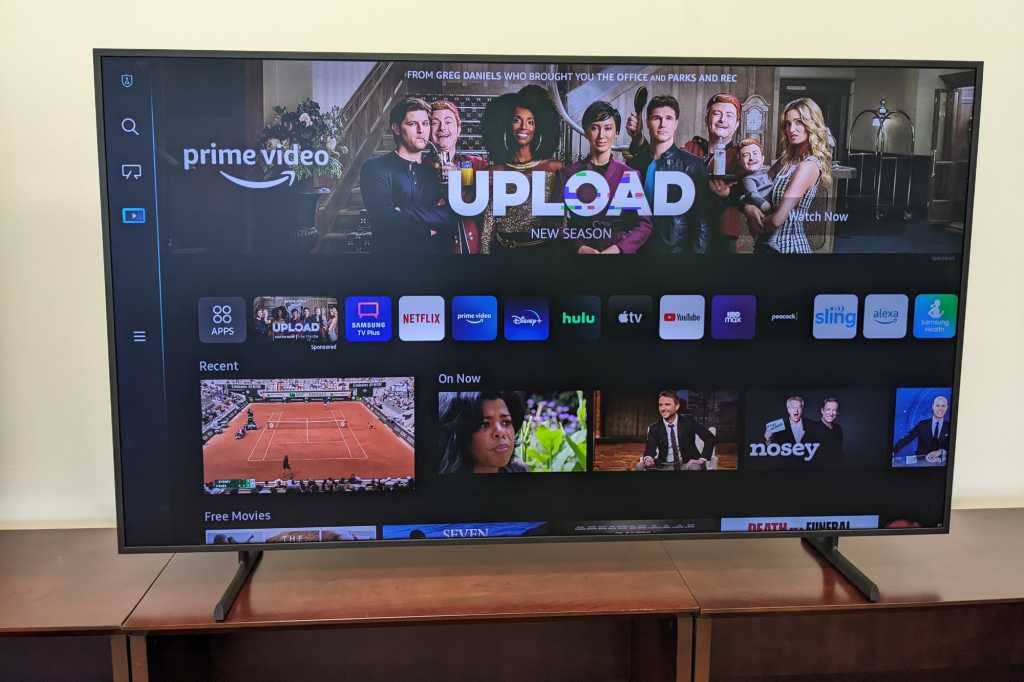 IDG
At a glance

Inject some culture into your family’s life by way of Samsung’s curated artwork with this super thin, high-quality, quantum dot TV that doubles as a digital picture frame.

When you visit a museum featuring paintings, you’ve probably noticed that there’s rarely any physical barrier between your eyes and the brush strokes. If there is, it’s either non-reflective, or extremely carefully lit to avoid glare.

Samsung decided that for the 2022 iteration of its “The Frame” TV, it wanted to more closely mimic that right-in-front-of-your eyes experience by switching from a semi-gloss to a full-on matte anti-glare coating. It indeed conveys a heightened sense of realism when you’re viewing the artwork that’s the TV’s secondary mission.

If you’re not familiar, the whole point of The Frame is to look good hanging on your wall while displaying a Samsung-curated collection of art. When it’s not functioning as an ordinary boob tube, that is.

This review is part of TechHive’s coverage of the best smart TVs,  where you’ll find reviews of the competition’s offerings, plus a buyer’s guide to the features you should consider when shopping for this type of product.

If you’re looking to save a few bucks, there are still 2021 models available. You’ll get the same basic experience, but without the matte finish (which is nice) or Samsung’s new white remote. I quite liked the old sculpted silver Frame remote, if that means anything. I’d certainly take a 2022 myself, but you can always save with last year’s TV technology. The savings get bigger as you move up in size, with the 2021 32-inch model model priced $100 less than the 2022 model, but the 2021 85-incher priced a cool grand less than the 2022 model.

The bezel on the Frame is extremely thin, and you can replace the stock black one with a variety of designer types, including white and faux woods. Interior decorators undoubtedly love this and that’s largely the point.

The 65-inch class (64.5 inches measured diagonally) model reviewed here is a mere 1-inch thick and weighs just shy of 50 pounds without the legs. Said legs add only a pound to the weight, but if ever there was a TV that should be wall-mounted as a matter of course, it’s The Frame. Indeed, Samsung actually includes a “Slim” wall mount (400 x 300mm) with the unit.

Samsung includes a few artistic renderings for free, but there’s also the Art Store where you can purchase, or rent via a subscription ($5 per month). If you’re going the way of the Frame, you might as well go all the way. Get the subscription.

As mentioned, the Frame is one of two Samsung TVs still employing the One Connect breakout box. Basically, this external enclosure houses all the ports, power transformer, and other components, so they aren’t mounted on the display panel. This allows Samsung to make the TV thinner so it mounts closer to the wall. Like a picture frame. Yup.

The other TV is the QN900B which sports a flatter, wider version of the breakout box that mounts on its pedestal stand. One Connect refers to the single cable that runs from the box to the TV, delivering signals and power.

The One Connect box offers four HDMI ports, one with eARC (enhanced Audio Return Channel) and one marked for gaming (it’s the only one that accepts 120Hz signals). There are two USB ports on the box, one of which is on the side for easy access. Also present are coax for cable and antennas, ethernet, optical S/PDIF audio out, as well as EX LInk (RS-232C) for system integration (turning all your A/V gear on and off at the same time). The only other connections are the port for the One Connect cable and the power cable to the wall.

I realize I sound like a broken record when it comes to Samsung’s user interface and user experience. The UI is fine, in that it gets the job done and has all the features, apps (YouTube, Netflix, Apple, et al), and settings you’d expect. But I find it inefficient and frustrating at times. It loses icons when the devices they represent aren’t present, and it takes three to five clicks to do what most interfaces can accomplish with two or three.

The Frame shares a new white-colored remote (shown above) with Samsung’s other lifestyle TV, the Serif. Oddly, because the Frame’s bezel isn’t white by default. I liked last year’s version, which was silver with some sculpting. This new one is also attractive, and it sports the same low button-count layout of Samsung’s other remotes.

As usual, I love the remote’s two ridge-like, three-action buttons: Push away from you for one function, pull toward for another, and press down for a third). What I don’t like is the absence of buttons dedicated to specific settings, input selection, and transport control (apart from play/pause). The circular button serves as a limited transport control in some circumstances, but is also serves any number of other functions and is rather easy to make missteps with.

I am a bit surprised Samsung didn’t deploy its Neo QLED mini-LED backlighting technology to up the ante for the Frame this year. As I said earlier, the Frame needs to be available in a wider array of sizes, and that tech might not be cost effective in smaller sizes. But that’s just speculation on my part; Samsung didn’t say.

That said, the edge lighting the Frame does use has its own advantage: a smoother, more even backlight experience. It doesn’t do blacks as well as array backlighting or OLED, but there are rarely any of the artifacts (shimmer, moiré, clouding, blooming, and the like) you often see with the newer technologies. For showing static photos, edge-lighting might be the preferred tech.

The new matte finish does help with the perception of blacks being darker than with most edge-lit TVs. There’s certainly nothing amiss with the Frame’s color acuity, peak brightness (perhaps 500 nits), or sharp detail–all hallmarks of Samsung’s approach to images. And yes, companies do differ in what they consider a good picture.

Screen uniformity of the matte finish and backlighting was excellent. I noticed no clouding or light leaking from the edges of the display. Motion compensation was also top notch.

Sound is loud and reasonably sonorous, but like nearly every flat panel TV, there’s a distinct lack of lower frequencies. This is exacerbated in a TV as thin as the Frame, so I’d recommend an external sound solution for anything beyond casual viewing.

The Frame does feature Samsung’s Q-Symphony technology, which allows you to use the TVs speakers at the same time as a soundbar or other external audio equipment. This in effect makes the TV a second center speaker and can enhance dialog. Not being able to hear dialog (mumbling method acting) without cranking the volume is a major complaint among many viewers.

Buy a Samsung ‘The Frame’ for yourself–and for the kids

Purely as a TV, the Frame is certainly one of the better mid-range units on the market–and is likely the best edge-lit you can buy. And of course, the breakout box and One Connect cable are major perks when it comes to wall mounting. The 2022 model is a very nice, if incremental improvement over previous models of the Frame.

We also appreciate Samsung’s efforts to uplift a communications device that far too often acts as a cultural sewer pipe. If I had kids in the house, I’d certainly consider the $5-per-month subscription to bring some of humanity’s greater creations to their attention.