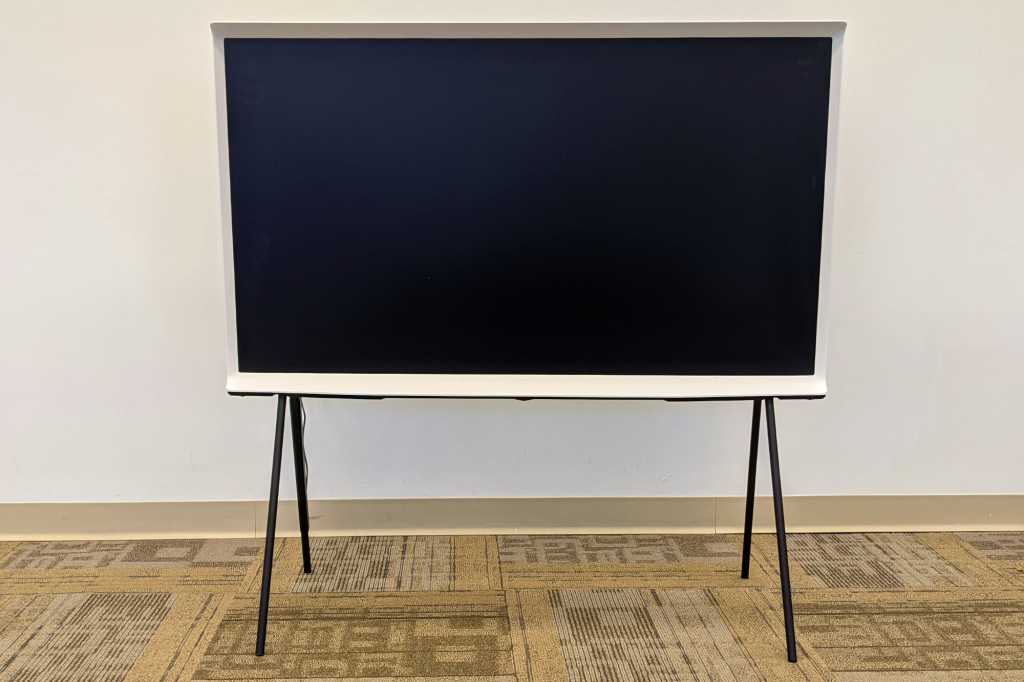 If you’re looking for a TV that adds some fun to the mix and works well in bright environments, Samsung’s The Serif deserves a look-see.

Samsung has a penchant for creating off-the-beaten-path TVs, and its The Serif is perhaps furthest from the straight-and-narrow. I’ll drop the “The” for this review, unless it’s grammatically necessary. That just leaves me to describe an attractive TV with Samsung’s typical upscale image quality.

The Serif’s design and feature set

I’m not entirely sure what school of looks to ascribe the Serif’s sculpted white bezel and case to. The protruding edges are truly reminiscent of the serifs on a font, but that’s not a design school. I know my Francophile mother and our like-minded friend Mimi would love it. The fact that it delivers a very good image will definitely be of secondary concern to them.

I am not describing the Serif old-fashioned, because it could easily fit in with any number of modern motifs. To be perfectly honest, I dig it; though that’s perhaps more because it dares to be white in a sea of black, dark gray, and dark silver TVs. Good on ya’ Samsung. Then again, white seems to be swinging back into fashion. Whether it will be fashionable two or three years from now is anyone’s guess.

The other unique aspect of the Serif is the long legs that let it stand on its own as piece of furniture. It somewhat has the appearance of a small chalkboard, especially when it’s turned off. (So, keep toddlers with chalk away!) A removable textured back panel covers all the unsightly ports, so it’s less grating visually what viewed from behind. The Serif is obviously designed to sit in the middle of a room, not up against a wall–there’s no VESA mount point. The power cord is a tether, of course, but hey–you can’t have everything.

The 55-inch model (54.6 inches measured diagonally) weighs in at a substantial 58 pounds, with another two pounds in the legs. The ports include four HDMI types, one with eARC and one–port 4–with 120Hz support for gaming consoles. There’s coax for antennas and older cable connections, RS-232c (EX-LINK), optical digital audio out, and two USB 2.0 ports. The latter support peripherals such as keyboards, as well and mass storage devices for media playback.

There is no ethernet port, oddly enough, so you’ll need to rely on Wi-Fi 5 (802.11ac). Again, it’s intended to sit out in the middle of the room. There are no legacy connections either, so you’ll need an HDMI adapter if your external gear is of a certain vintage.

I’ve been banging on Samsung’s Smart Hub interface/remote combo recently for being inefficient. And it is; however, it also does a good job of marrying different types of content, it supports a large pool of apps (Netflix, YouTube, and more), and its sports a very nice channel guide. In other words, the user interface has everything you want, it’s just tedious and mysterious at times.

The new TM2050A remote uses the same basic layout as other the-fewer-the-buttons-the-better Samsung models. When I say “basic,” I mean there are no dedicated input, settings, transport controls, or numeric keypad. This time, however, it’s white to match the color of the Serif. It’s also used for the Frame which is dark gray. Go figure. It’s light, but solid in the hand, has a mic for voice commands, and is rechargeable via Type-C or sunlight (it has solar panel).

It seems the display industry is always vacillating between glossy and matte coatings, the latter of which is now employed on the Serif. The former look great when there’s little ambient light, the latter reduce glare drastically when there’s a lot. Witness Apple and the laser etching they offer for their otherwise glossy displays.

Other than excellent glare reduction, and providing a very wide viewing angle, Samsung’s new matte coating (found on the Frame as well as the Serif) enhances the appearance of blacks. Though I viewed the Serif in a very bright room (a predicted milieu), the blacks were quite good as were the viewing angles and screen uniformity.

The Serif uses Samsung’s older edge-lit quantum-dot technology, versus the newer mini-LED array backlighting you’ll find in its Neo QLED systems. The color acuity and saturation of the Serif is nonetheless roughly equivalent to the newer tech, although usable and peak brightness levels aren’t as high.

Motion compensation is very good, as it is with most Samsung TVs, and the edge-lighting reduces the shimmer, moiré, blooming, and other artifacts you get with array-backlit Samsung TVs–it’s simply the nature of the beast. Edge-lighting creates a more uniform picture, albeit with less contrast.

The aforementioned good viewing angles are helped by the Serif’s protruding bezel. Obviously, said bezel is going to block viewing from very wide angles, but it also blocks ambient light from the hitting the display from those acute angles, making for a better experience for those directly in front. Who said life was fair?

Though the Serif is edge-lit, I really didn’t miss the array backlighting found in Samsung’s pricier TVs. Edge-lit HDR isn’t particularly impressive, but for most casual viewing–and even normal movies–the image-quality is first-tier, if at the bottom of said tier. That said, I’m a cheap date. My TV at home is a 43-inch edge-lit unit, and I like it just fine.

Samsung’s The Serif is a unique, fun, and competent smart TV

If you’re looking for a uniquely styled TV that’s a fun eyeful even when it’s powered off, I recommend the Serif. The picture is Samsung’s typical more-than-competent rendering, so you don’t give up anything in that regard. It costs a little more than, say a Q60- or Q50-series, and its looks won’t appeal to everyone, but it’s fun–and how often do you get to say that about a TV?