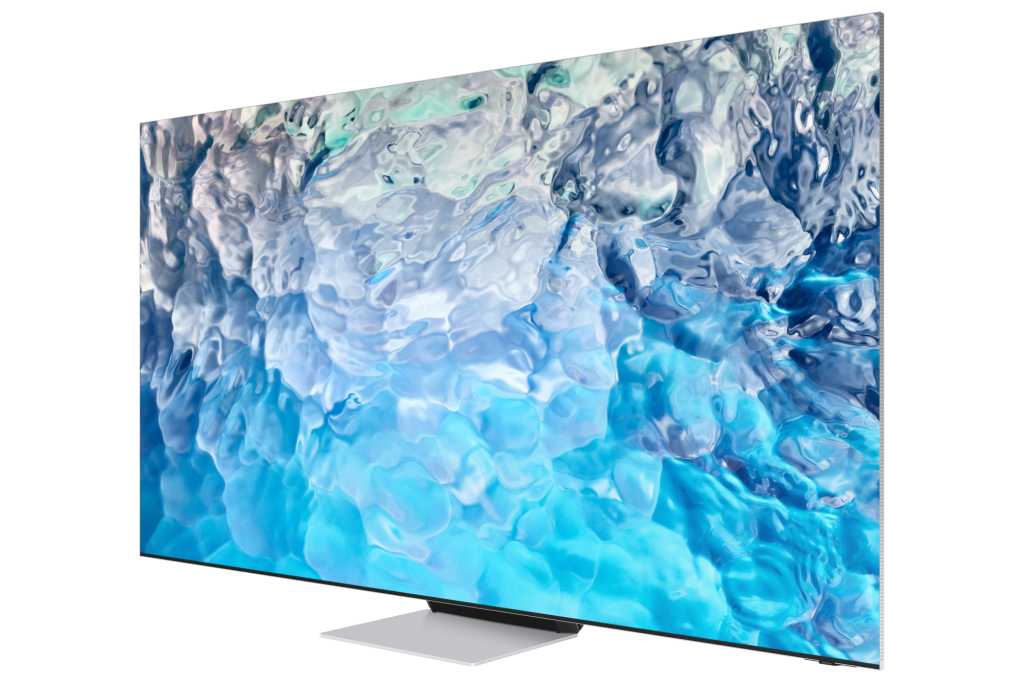 The QN900B is one of our favorite 8K UHD TVs. Excellent upscaling, accurate color, and loads of peak brightness create an impactful image–especially with HDR material.

For that handsome sum, you get the ability to play 8K content from storage devices and from YouTube (don’t laugh, during our Sony Bravia Master Series Z9J 8K review, we discovered that TV can’t) and upscaling magic that makes the 4K resolution you’ll encounter far more often absolutely fabulous.

My favorite improvement for the 2022 QN900 series is its I/O port breakout box. It’s different from years past (and the current model of Samsung’s Frame TV). It’s wider, thinner, and can piggyback on the outside of the TV’s pedestal stand. With the included cover, you’d never know it was there if there not for the wires. That’s very neat and handy–if you use the stand. Wall-mount the TV and you can put the box anywhere you want, as long as it’s within reach of the single thin, clear One Connect cable that connects it to the TV.

An 85-inch TV will rather hefty, to state the obvious, and the QN900B I looked at weighs in at 96.6 pounds. That’s heavy (the VESA mount point is 600 x 400mm), but the display is not thick. As the ports, power transformer, and other electronics are contained in the breakout box, the display doesn’t need the caboose that normally houses them. That leaves the TV itself to measure a mere 0.7 inches thick. Yowser. If you’re looking for something that will hug the wall closely, the QN900B is about as good as it gets.

Samsung’s ambient mode and “wallpapers” also allow the QN900B to appear as something other than a massive black hole on the wall when it’s not in use. That’s one reason I prefer a smaller TV–I don’t feel like it’s swallowing the room when it’s turned off.

The aforementioned breakout box sports four HDMI ports, all four of which are 120Hz/144Hz, which should keep gamers happy. There are also three USB 2.0 ports, ethernet, coax for antennas and older cable boxes, EX-LINK (RS-232c), optical digital audio out, and–of course–the One Connect port. The onboard tuner is the newer ATSC 3.0, the Wi-Fi is Wi-Fi 5 (802.11ac), and there’s a Bluetooth 5.2 radio onboard. It would have been nice to have a faster WiFi 6 adapter onboard, but Wi-Fi 5 is fast enough for high-resolution streaming.

Samsung has slightly revamped its onscreen user interface. While it’s easier to read and a little more intuitive in spots, it’s no more efficient. Indeed, I might argue that it’s actually less efficient. The major change is a black icon ribbon to the left that’s always present. It steals space from the main panels, yet it doesn’t offer much in the way of direct access to functions. Instead, it opens up other icon ribbons at the bottom where you’ll find the settings, attached devices, and so on.

I don’t want to be mean, but Samsung should really rethink both its user interface and the minimalism of the remote. The latter, which is handsome and sports clever button/joysticks for volume and channel selection, also lacks number keys, input select, a settings shortcut, and dedicated transport controls. Everything must be tediously entered using the cursor and onscreen keypads and keyboards. To be fair, the rocker button does help with transport functions.

In total, using a Samsung TV is significantly more difficult than using a Roku, Google TV, or WebOS TV. It’s irritating enough that I actually warn my friends about it when they ask for advice. I’m not the only reviewer cognizant of this deficit in the user experience. Hear our voices, Samsung.

Despite switching to a mini-LED backlight, there’s been no drastic improvement in performance with the 900 series since my Samsung Q900 review in late 2019. Image quality is impressive, particularly the upscaling of 4K UHD and lower-resolution material. That’s a good thing, considering the dearth of native 8K content, if not necessarily an overly compelling reason to spend so much money on a TV.

As to the basics: The QN900B’s color is great, thanks to the quantum dots; there’s a ton of peak brightness (more than 2,000 nits) to produce impactful HDR; and the panel boasts excellent screen uniformity. Viewing angles are good, although glare becomes a factor at around the 7- and 4-o’clock and 4 o’clock positions, depending on ambient light. That’s because the QN900B uses Samsung’s glossy coating, not the new matte coating we saw in our Frame TV review (ditto Samsung’s other lifestyle TV, the Serif TV).

Image processing, including the aforementioned excellent upscaling, is generally quite good. I observed considerably less shimmer and moiré than I have with Samsung’s 4K UHD QLEDs, even though details remain sharp and bright. It seems the extra pixels really help with those factors.

The mini-LED backlighting features quite a few zones (upwards of 400 by my count), which works well with a lot of material, but it also makes local dimming a daunting task. I’m not sure why Samsung hasn’t followed TCL’s lead and used a more granular zone scheme for the mini-LEDs. I believe that would ward off some of the issues I saw in the QN900B. You can read my observations in TechHive’s TCL 8-series review Samsung’s TV did ace Sony’s Las Vegas night sky video with no auras or blooming where neon meets sky, but it also induced what appeared to be gas clouds in space during the Spears & Munsil starfield–a rather unusual artifact that I’ve seen only a few other times.

Overall, however, watching the Samsung QN900B was a very pleasurable experience that only a jaded reviewer would complain about.

The Samsung QN900B is a great TV that wonderfully upscales 4K UHD material. But it’s also pricey and 8K content hasn’t proliferated as rapidly it was expected to. Given that most entertainment content is still presented in 1080p resolution, you might be better served by the fantastic color, contrast, and high peak brightness of Samsung’s new OLED TV (read my Samsung S95B review for all the details). You’d sacrifice some resolution and screen size, since that’s a 4K model that maxes out at 65 inches, but you’d have $5,000 left in your pocket for a first-class home theater audio system, a high-end Blu-ray player, a better couch, or whatever else might strike your fancy.