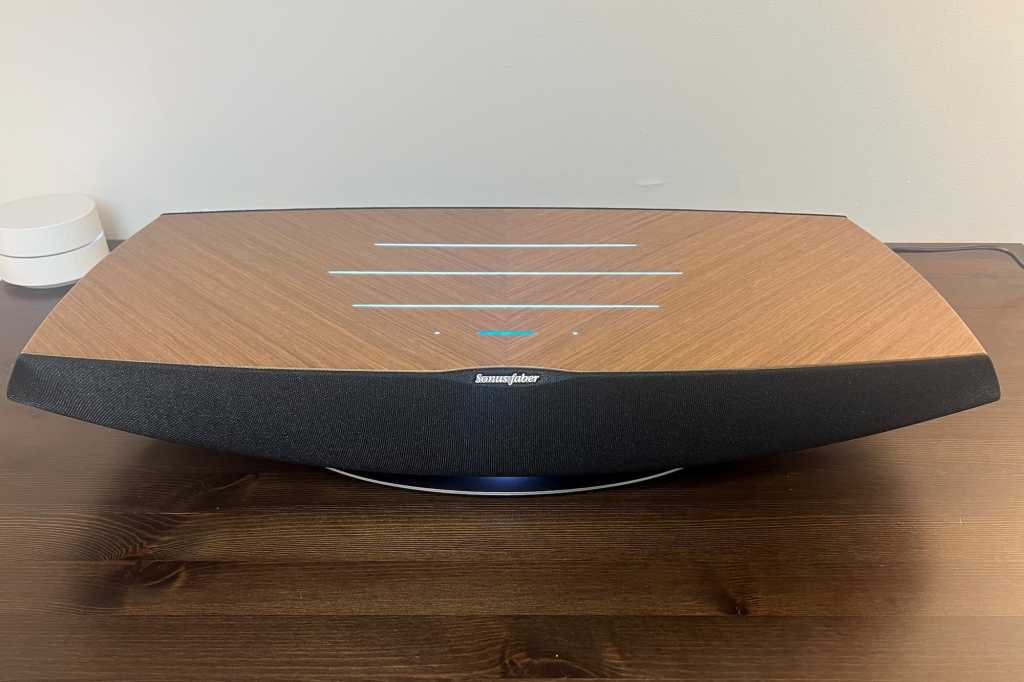 The Sonus faber brand elicits very high expectations; the Omnia smart speaker delivers the company’s signature sound at a more attainable price (compared to the rest of its product line, that is).

The Sonus faber Omnia all-in-one wireless music system sounds every bit as good it looks. Or maybe I should say it looks every bit as good as it sounds. Whatever your perspective, the Omnia is a beautiful piece of gear that can fit right in with a collection of classic mid-century modern designs, but it delivers audio that early hi-fi buffs couldn’t begin to imagine.

Founded in 1983 by Italian designer Franco Serbin, Sonus faber made its reputation by using high-quality wood for the cabinets that house its world-class speakers. The company’s Aida II floorstanding speakers, aimed the most demanding and deep-pocketed customers, retail for $130,000. Its $2,200 Lumina III floorstanding speakers are a bit more affordable, but they still need an amp and input source for playback.

The Omnia is an all-in-one solution that includes Apple AirPlay 2, Chromecast, Bluetooth (with AptX HD support) and Wi-Fi (via an onboard dual-band Wi-Fi 5 adapter). The system is compatible with Spotify Connect, Tidal Connect, and is Roon Ready.

The speaker measures 5.12 x 25.6 x 11 inches (HxWxD) and weighs 16.75 pounds. The top of the device is a touch-sensitive interface to control the system. Users can tell which input is selected, which streaming service is in use, or control the volume by seeing the pattern of illuminated lights on the surface. There’s also a more traditional remote control with labeled controls.

Once you set up the connection with the Home app for iOS or the Google Home app for Android, Wi-Fi is the optimal playback choice. Follow the steps clearly described in the excellent Quick Start Guide, and the Omnia will remember your network and automatically reconnect, even if you unplug it and move the speaker to another location on the same network. There’s also a 10/100 Mbps ethernet port if you prefer a hardwired connection

Tidal and Spotify users should pay special attention, since the Omnia supports direct connections from both apps, and the resulting sound is better than what you’ll get from either Bluetooth or AirPlay 2. (Don’t miss our comparison of all the major music-streaming services.)

There’s an HDMI ARC port if you want to use the unit as a television speaker, and a mini-DIN analog input allows you to plug in a turntable via the included mini-DIN-to-RCA adapter cable. A switch on the back of the unit allows you to choose between phono and line-level inputs.

An indicator light on the top of the unit changes color based on the input source. The default is blue for Bluetooth, orange for HDMI, pink for phono, and white for streaming apps. The indicator will stay white if you’re using AirPlay, but it turns green for Spotify, light blue for Tidal, purple for Roon, and yellow for Chromecast. That’s useful, because most of those apps will also work via AirPlay, and you’ll want to use the direct connection for its improved audio quality.

There’s a small remote with a shape that echoes the design of the Omnia. It’s outfitted with an on/off button, volume and muting controls, skip forward and back buttons and the ability to switch inputs. The rubberized buttons can’t be discerned solely by touch, and they’re not backlit, so you’ll need low-level illumination to use it.

Sonus faber touts its Crescendo technology that utilizes the full-range drivers situated on each end of the Omnia speaker to combine a mix of in-phase dipole and anti-phase dipole signal processing to create what the company calls a “3D listening experience.” 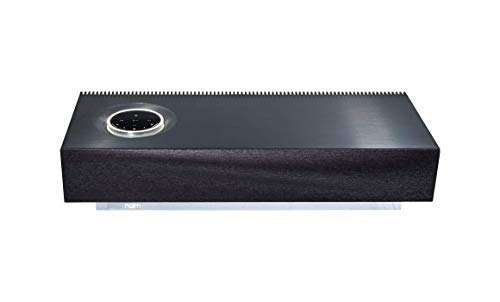 Sonus faber almost has the high-end streaming speaker market to itself, with its only real competition coming from the similarly priced Naim Mu-so 2. Both speakers live up to the stellar reputations of their respective manufacturers and, while they’re almost equally outstanding, each offers a genuine alternative to the other.

The Mu-so is an imposing hunk of 1980s-style industrial design that gives off slightly cold sci-fi vibes, while the Omnia radiates those Eames-style mid-century curves. My first-generation Mu-so offers a bit more body on the low end, but it can’t quite match the clarity and detail that the Omnia delivers on acoustic guitars or woodwinds.

Listening to Ethel Cain’s ethereal new album Preacher’s Daughter on the Omnia via Tidal Connect was a particularly illuminating experience. Producer/singer/songwriter Hayden Anhedönia’s swirling backing vocals recall Elizabeth Fraser of the Cocteau Twins, and there’s a purposeful and insistent mid-range buzz running through the album. It’s a thick, demanding sound that’s bedeviled my lesser speakers and headphones, but the Omnia kept the instruments discrete and opened Cain’s music up into something hypnotic.

My test unit came with the walnut finish. Sonus faber promises an all-black “graphite” version later this year, but it’s the contrast between the wood grain and the black fabric grille cloth that makes the Omnia’s design so compelling. The walnut seems like the obvious choice.

The Sonus faber Omnia should be one of those audio investments that lasts a lifetime. Even if its streaming technology is somehow superseded by as-yet unimagined protocols, it works just as well with a turntable and, as we’ve learned over the past few years, vinyl is never going away. The bonus is that the Omnia seems destined to become part of the permanent collection of design museums the world over, and it’s an incredible buzz to see something you own go on display as a work of art.