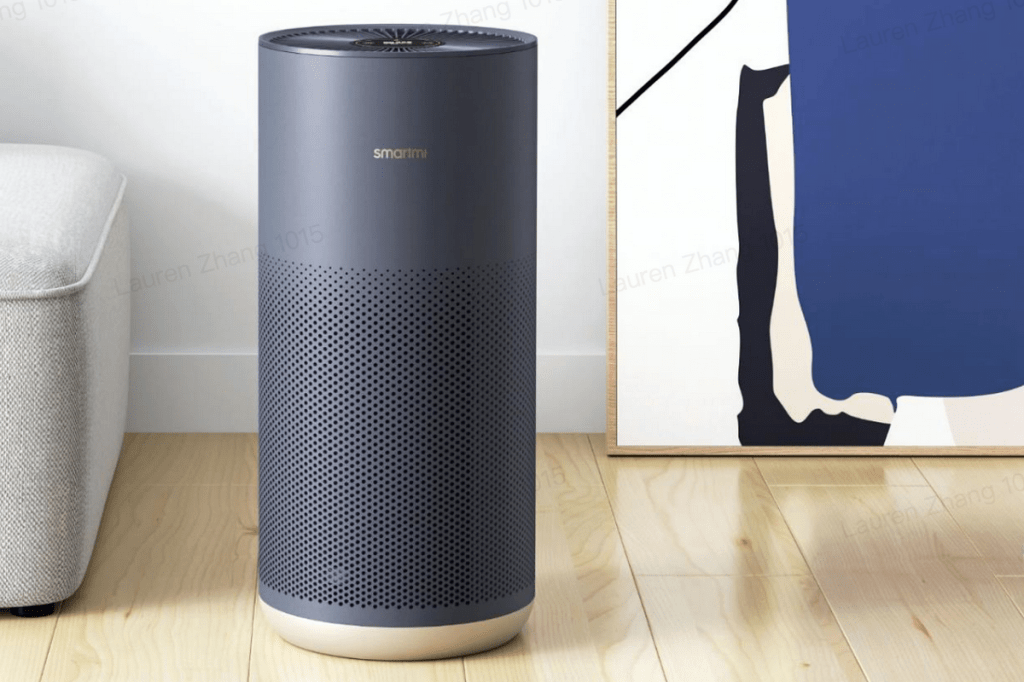 Smartmi Technology
At a glance

Of all the smart home products that pass through my doors, you wouldn’t think that a simple air purifier would be one of the most troublesome devices I’ve tested in years. And yet here we are, with Smartmi’s Air Purifier 2, a product I nearly threw out the window in frustration during two solid weeks of testing.

But before I get to that, let’s cover some basics. The Smartmi 2 is a cylindrical tower style purifier, 22 inches tall and 11 inches in diameter. At 12 pounds it’s easily maneuverable to be placed just about anywhere, with 360 degrees of air intake through the base, pushed through the cylindrical H13 HEPA filter, and emitted upwardly through the top of the device. A touch-sensitive set of controls is available in the center of the exhaust grille, but there are only two pressable buttons, a power button and a mode-cycling button that takes you through automatic, sleep, and favorite modes (you can set that last one in Smartmi’s app).

This review is part of TechHive’s coverage of the best smart air purifiers, where you’ll find reviews of the competition’s offerings, plus a buyer’s guide to the features you should consider when shopping for this type of product.

A bevy of additional indicators are available on this surface, including a color-coded “pollen alert” indicator (which measures PM2.5 and PM10 pollution), a separate numerical PM2.5 indicator, a temperature reading, a bar-chart indicator of total VOC (volatile organic compound) levels, and finally a color-coded ring surrounding all this that is calculated based on both PM2.5 and VOC levels. That’s a lot of data to play with, and it’s even more than you’ll get through the app.

Claimed CADR (clean air delivery rates) are 223 cubic feet/minute for dust, 206 for pollen, and (oddly) just 60 for smoke. The effective maximum room size is a healthy 484 square feet, with air replaced three times per hour. Filters ($50) are rated for 6 to 12 months of life, depending on use.

The Smartmi Link app has many more features than the onboard control panel. If you want to manually adjust the fan speed, it can only be done via the app using a slider rather than preset levels—though things get awfully loud (64dB max) past the halfway mark on the speed meter. An internal UV-C light can be turned on—again, only in the app—if you want to zap germs with ultraviolet light, and features like a scheduler and delayed shutdown can be accessed in-app as well. The app can disable the Smartmi 2’s chirping sounds and offers a child lock and temperature and humidity readings.

You’ll need to connect the Smartmi to your 2.4GHz Wi-Fi network to do any of these things, and that’s where the fun really began for me. While the unit connected to my wireless network in seconds, I was greeted in the app by a strange notification that my filter—just out of the plastic—was at end of life, the temperature was -4 degrees Fahrenheit, and a firmware update was needed. I figured the first two issues were due to the third, so I dutifully followed the prompts to install said update. The process was slow, plodding along to about 30 percent completion until, like that, it just quit, prompting me to “retry.”

And so I did, many times, for nearly two weeks, sometimes getting to 85 percent completion, sometimes stuck on zero for 10 minutes, but invariably ending in “retry.” I tried everything from unplugging and repowering the unit, force-quitting the app, logging out and on again, but nothing would work. Eventually I was connected to a Chinese tech support team—six people in total—on a Zoom call to troubleshoot. The first advice I was given: “Follow the manual.”

The support call was particularly unhelpful, with the specious consensus being that the update was taking too long because my network connection was too slow, and that perhaps I should try connecting to a different Wi-Fi network, like my smartphone’s hotspot. That didn’t work because the app couldn’t see my cell phone hotspot—or handle a manually added Wi-Fi network with a space in it—which ultimately sent me back to the drawing board. What finally worked—on day 11—was simply brute-forcing the updates. I simply tried over and over until—after a few 98 percent completions—one finally made it through.

Like that, I was able to get the real temperature, not be alerted to brand new but used-up filters, and even connect the Smartmi 2 to Apple’s HomeKit ecosystem, which is a nice-to-have feature, if not entirely useful considering it has but a few of the features that the app itself has. Alexa and Google Assistant are both also supported if you want voice control over the device.

Of course, you’ll need to get those firmware updates working if you want to do any of this—Homekit was DOA until day 11 for me—and that might be a big lift if your experience is anywhere close to mine. Is it really likely that my internet data plan can’t handle the Smartmi 2’s intense firmware downloading bandwidth needs? While anything is possible, my suspicion is that these devices really need their firmware updated before they ever leave the factory.