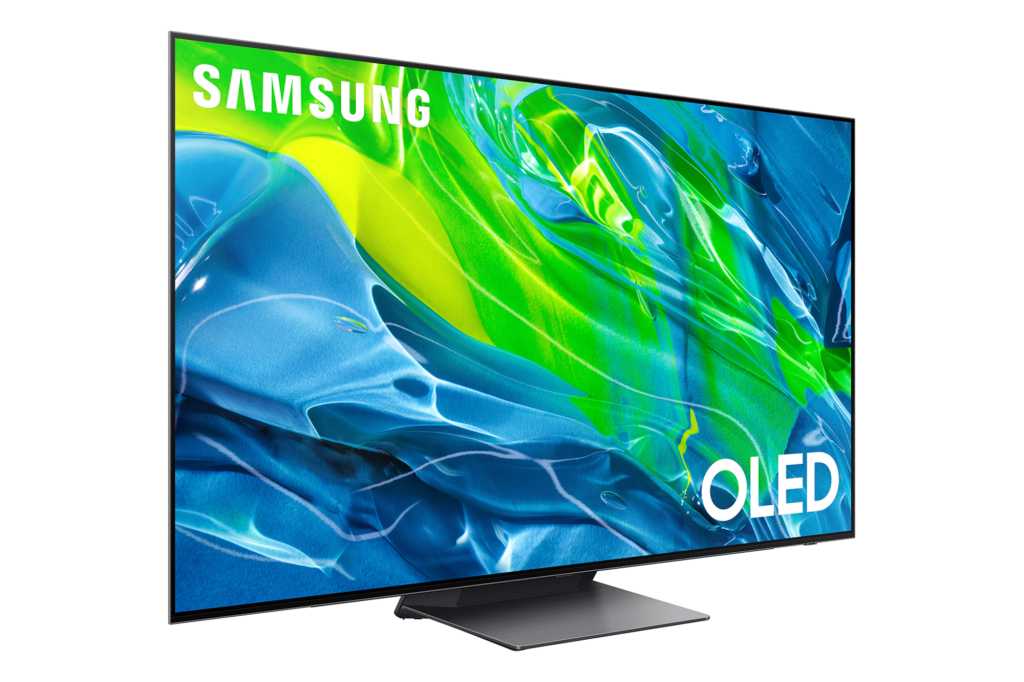 Marry the lush black of OLED with the rich, saturated color of quantum dots, and you get the Samsung S95B, quite possibly the best 4K TV ever made.

Game changers in the TV space don’t show up very often, but when they do, they always cause a stir: LCDs, LED backlighting, OLED, and quantum dots have all moved TV technology forward. Now, thanks to Samsung Display (not to be confused with Samsung’s TV division) marrying the latter two technologies, we have a new game-changer on our hands.

Our first example of said union is Samsung’s S95B, a QD-OLED panel that redefines the top tier of TVs by delivering OLED blacks with vibrant, saturated quantum dot color. We’re impressed with the result, to say the least.

The 65-inch version weighs in at just under 50 pounds (or 47.8 pounds, to be exact) and features an iMac-like pedestal stand, which adds another ten pounds. Not only does the stand look nice, it also allows you to set the unit on a relatively narrow surface, something you can’t do with the widely spaced feet many TVs employ.

A VESA 300mm x 200MM attachment point is on hand for wall mounting. You can see how thin the actual panel is in the image below, though the electronics boot increases the thickness of the TV to 1.6 inches. (Right-click and select “Open image in New Tab” to see a larger version.)

The S95B is an 120Hz RGB OLED panel. RGB refers to each pixel consisting of a red, green, and blue sub-pixel. By comparison, LG’s OLED TV technology is WRGB, adding a fourth white sub-pixel to augment brightness. Furthermore, the S95B’s RGB OLED uses quantum dots for color instead of LG’s filters, the reason for its outstanding color acuity.

As with other Samsung TVs, the S95B lacks support for Dolby Vision HDR; instead, you get Samsung’s own HDR10+ technology, along with plain HDR10 and HLG. While there’s no Dolby Vision, the set does offer Dolby Atmos, along with the Dolby TrueHD, Dolby Digital Plus, and the older flavors of Dolby audio.

Other perks include FreeSync Premium, variable refresh rate (part of the HDMI standard), auto low-latency, game mode, filmmaker mode, and a very capable channel/content guide. The app ecosystem includes all the biggies such as Netflix, YouTube, and Apple TV, as well as Microsoft 365. I should note that you can use the USB ports to connect a keyboard, while the Bluetooth radio will let you connect wireless headphones.

There are (of course) Samsung’s own “value-adding” features, such as Ambient mode, wallpaper that matches the TV’s surroundings, auto sound adjustment, and support for the manufacturer’s 360-degree cameras. Google Assistant and Alexa are accommodated via the voice remote, as is Samsung’s own Bixby voice assistant. Also on hand is a channel/content guide.

Samsung has tweaked its onscreen interface for 2022, replacing the old vertical contextual menus with secondary icon panels that open to the side and bottom when you choose an option from the main menu. The new interface is a bit more intuitive, and certainly easier to read. Unfortunately, Samsung’s UI still requires far more clicks than its competitors to accomplish most actions.

The minimalist, voice-enabled TM2180E remote is the same solar-charged (with a Type-C port as a fallback) model that Samsung introduced last year. But while it’s sleek, handsome, and comfortable, the remote only offers the most basic buttons and functions. (Update: Samsung says retail buyers will get a new-for-2022 remote that’s slightly different from the one pictured above. The new model boasts the neat trick of harvesting energy from radio waves to charge its battery in addition to using energy from the sun.)

I tested the S95B side-by-side with an LG G2 evo Gallery edition OLED, and the difference was plain to see. While the S95B didn’t do quite as well with pure white (the G2 has that white sub-pixel, after all), it delivered a substantial uptick in color acuity and saturation when dealing with normal material. One of the drawbacks to OLED is its general deficit in usable brightness. Samsung has managed to address that issue without blowing out the entire image, as happens when you up the overall brightness with WRGB.

Where the difference really becomes noticeable is when rendering high dynamic range material. With over 1,000 nits peak brightness, the S95B absolutely dominates the G2 with HDR. Additionally, the S95B’s bright highlights are far more color saturated than the G2’s, which relies heavily on that white sub-pixel. The S95B could do a bit better with detail in dark areas, but overall, it’s easily the richest, most dynamic HDR (and SDR) TV I’ve experienced in the consumer space.

Note that we had to set the color space to “native;” i.e., the space employed by the content. In some of the first tests with the color space set to “auto,” colors were way off due to the TV’s attempts to remap them to the wrong space. Sony’s Las Vegas nighttime contrast demo perked up enormously after this tweak.

Where Samsung lags behind LG a bit is with processing. We noticed that the S95B suffers more moiré and shimmer during pans of detailed scenes than the LG, although that’s bound to happen given the S95B’s greater peak brightness and Samsung’s penchant for sharpening images. Same goes for the S95B’s motion compensation, which wasn’t quite on par with the LG. We spotted other minor processing foibles on the S95B during the tough Spears & Munsil tests, but we’ve seen far worse.

As with any OLED TV, the S95B’s screen uniformity is excellent and the viewing angle is super wide. You’ll see no distortion or color shift even when you view almost directly from the side.

The S95B’s 2.2.2-channel speaker array sounds quite good for built-in TV speakers. Even better, you can pair the set with one of Samsung’s high-end Q-Symphony soundbars, which can work in sync with the TV’s integrated drivers.

I haven’t seen Sony’s new A95K OLED, which is based on the same Samsung Display panel, but to date, the Samsung S95B offers easily the best 4K UHD OLED picture I’ve seen. The uptick in color acuity, saturation, and brightness from previous generations is stunning.

As I consider OLED the best consumer viewing experience, that’s tantamount to calling the S95B the best 4K UHD TV image on the market.

Updated shortly after publication to correct our description of Samsung’s remote control (the TV comes with a new model that we didn’t have with our review unit).