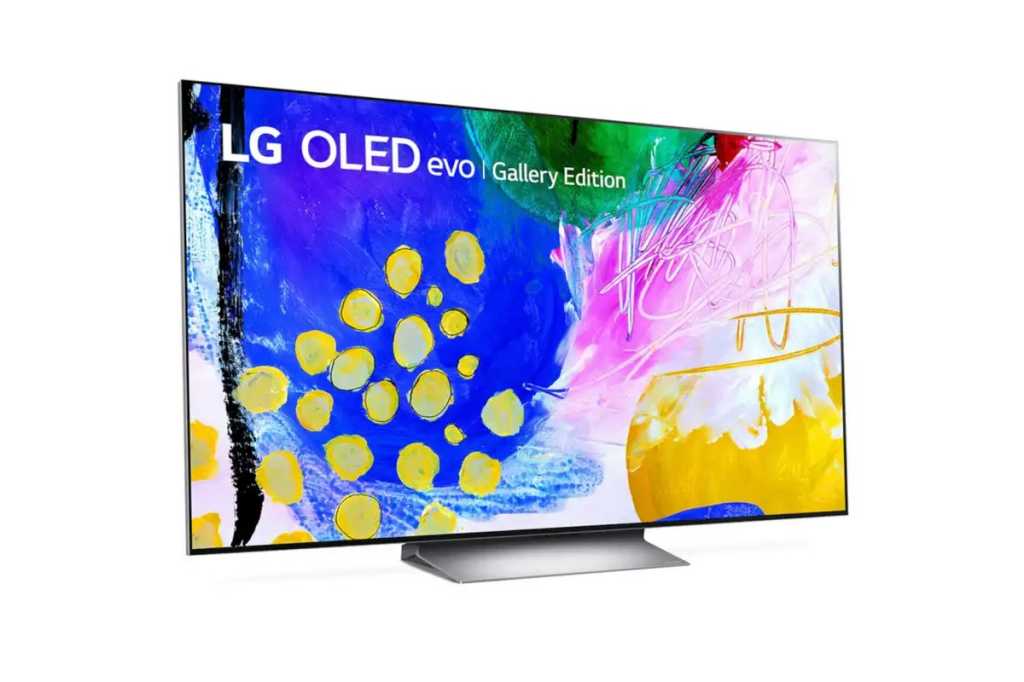 The G2 Evo Gallery edition is a great OLED TV with a super thin bezel that looks especially nice on the wall. Our only caveat is that newer RGB OLEDs have eclipsed LG’s older WRGB OLED image technology.

LG improving their OLED lineup with a new processor is great news. It’s always a good thing when an excellent TV gets even better.

The elephant in the room, however, is the advent of next-generation OLED TVs from both Samsung and Sony. These sets leverage the quantum-dot RGB OLED technology that Samsung Display (not Samsung’s TV division) announced at CES in January, 2022.

The $3,000 question: Will LG’s improved image processing be enough to keep the its OLED TVs at the forefront of image quality?

The 65-incher I evaluated weighs in at just under 60 pounds, including the 17-inch-wide pedestal stand. The bezel is extremely thin, as is the panel itself, though the boot that houses the electronics boosts its depth to a full inch. For wall mounting this thin-to-win beauty, there’s a 300 x 300mm VESA attachment pattern.

When it comes to supporting advanced technologies, the G2 has few peers. The tuner is ATSC 3.0, all four HDMI ports are 2.1, and eARC is supported on one of those for high-bandwidth audio and uncompressed 7.1 surround. The Bluetooth is 5.0 and the Wi-Fi 6 (aka 802.11ax. Audiophiles will be interested to know that the LG G2 Evo Gallery Edition supports WiSA wireless audio.

Other ports include coax for older cable boxes and antennas, 3.5mm audio, RS-232C, two USB-A ports, ethernet, and optical S/PDIF. There’s not much in the way of legacy connections, as with many vendors these days, but you can always grab an HDMI converter for those.

I will compare the G2 to the new Samsung S95B QD OLED quite a bit in this review, and it’s worth noting that that in addition to HDR10 and HLG, the G2 supports Dolby Vision, which its Samsung rival does not. It does not support Samsung’s comparable-to-Dolby-Vision HDR10+. I’ve been told by industry insiders that HDR requires so little data, that the majority of HDR material being rendered these days simply supports all of them. There’s an HDR format war, but consumers really shouldn’t care.

Note that while I’m comparing the G2 to the $2,800 S95B, the Gallery Edition is a pricer TV due to its decorator design flourishes. The same 65-inch LG OLED goodness is available for quite a bit less with LG’s more mundane C and B2 models.

LG makes one of my favorite remotes. It supports voice commands, it’s large enough to easily keep track of, it fits in the hand nicely, and it’s efficient in use.

It’s of course “Magic” in that you can control a mouse-like cursor that appears when you shake the remote. It’s fun. Over time, however, I always find myself using the cursor wheel, as you don’t need to constantly the recalibrate the cursor position by bumping it up against the side of the screen.

LG’s WebOS 2.2 interface is also efficient–something I still can’t say about rival Samsung’s. It also features a very nice channel/media guide with curated content, and a highly competent media player that supports a wide variety of formats. In fact, it supports more formats than any other player I’m aware of. As I stream movies, music, and photos from my NAS box across the local network, I really appreciate this app.

The G2 I tested sat alongside one of Samsung’s new S95B OLEDs. The difference between LG’s four sub-pixel WRGB (white, red, green, blue) tech and the three sub-pixel RGB of Samsung was immediately noticeable. The G2’s color acuity was good, but its rival’s, which utilizes quantum dots, was spectacular. Both of course feature stellar blacks. Being able to shut off the self-emitting pixels pretty much guarantees that.

Where the G2 did seem to have an advantage was with pure whites and grays. Having that fourth white sub-pixel really helps in those cases. Where it doesn’t have quite the same advantage is when LG uses it to brighten up warmer colors, such as yellow and red. Those shades remain recognizable, of course, but they’re far less saturated and considerably less saturated than on the QD OLED panel.

Two areas I definitely preferred with the G2 were motion compensation and panning. It handled the Spears & Munsil motion tests perfectly once I upped the compensation (Hollywood can go kick rocks on this subject–I hate judder and jumps), as well as real-world motion material. There was almost no shimmer or moiré in pans of detailed patterns, something the S95B can’t claim. I should point out, however, that the S95B’s brighter details make it more difficult to avoid those artifacts.

I tried LG’s OLED motion setting and the effect was horrible. It seems as if additional black frames are being injected, and I’d worry that the resulting flicker could induce epileptic seizures. There were also more color issues with some material, due to improper tone mapping in “Auto” mode. Set the TV’s color space setting to Native to make sure you’re seeing the colors you should. The same goes for the S95B.

The G2’s black, as mentioned, is the usual OLED perfection. It’s this inky darkness that enables great contrast, even though the G2’s peak brightness tops out at around 700 nits. You can boost the overall brightness of the set, but the result is much as it is with an older LED/LCD TV: The whole image just washes out. The S95B offers far more peak brightness and hence better contrast.

Screen uniformity (no clouds or dark areas) is marvelous, and there is obviously not going to be any backlighting issues such as bleed or blooming with self-emitters. Also, even when viewed almost directly from the side, there’s no glare or distortion; i.e., the viewing angle is extremely wide.

Overall, I’d call LG’s OLED image processing best in class. I’ve favored it over Sony’s OLED chops in the past as well. When it comes to the overall picture, while I’d take an LG OLED over any 4K LCD, I’m afraid that rival QD OLEDs are now operating on a higher plane.

Great, but up against very stiff competition

The G2 is a great TV. The velvety blacks are fantastic and the overall image is very, very good. I also rate the remote, user interface, and imaging processing as superior. But as you’ve probably gathered by now, quantum-dot RGB OLED panels have taken TV picture quality to another level. Modest improvements from LG just aren’t going to keep up.

That said, as I already noted, if you want to get into OLED–which I’d always choose over LED-backlit LCD–LG’s less stylish offerings let you do it at a lower price point.