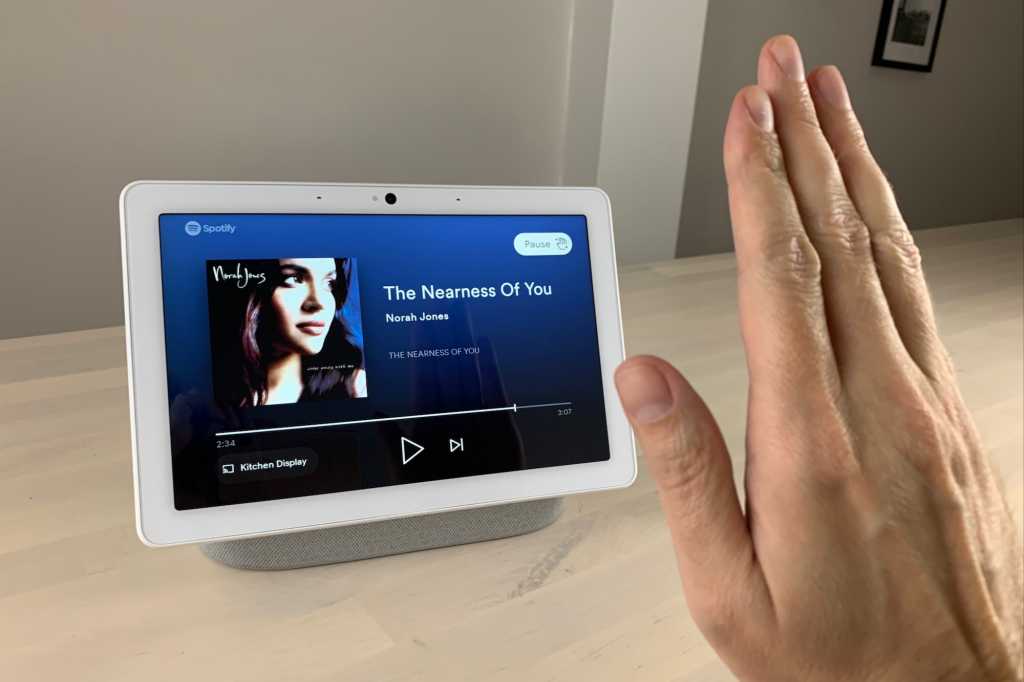 There are several ways you can interact with your Google Nest Hub or Hub Max display. One is by tapping or swiping the screen itself, while another is (of course) to start chatting with Google Assistant. But there’s a third, less obvious way you can control your Google display: by waving your hand in the air.

These so-called “Quick Gestures” let you perform some basic functionality on your Google Nest Hub Max or second-gen Nest Hub. For example, if you’re playing a Spotify tune on the Nest Hub Max, you can pause or resume your music with an open palm. On the newer Nest Hub, you can dismiss timers and alarms with a wave, while the same gesture will dismiss an over-talkative Assistant.

Note: Quick Gestures only work on the second-generation Nest Hub, which comes equipped with a motion-sensing Soli chip.

How to enable Quick Gestures on a Google Nest Hub Max

Before you start using Quick Gestures, you’ll need to turn on the Camera Sensing feature for the Google Nest Hub Max using the Google Home app.

Just open Google Home, scroll down to the tile for your Nest Hub Max, tap it, then tap the Settings icon in the top-right corner of the screen.

Tap Recognition & sharing, then toggle on the Camera Sensing option. Once that’s done, the Quick Gestures setting will become accessible; go ahead and toggle on that option, too.

How to perform Quick Gestures on a Google Nest Hub Max

Now, time to start waving your hand at your Nest Hub Max. Let’s start with music. Tee up some tunes on Apple Music, Spotify, or your streaming music service of choice, then look at the display (doing so will help Google know your wave is intentional) and raise your hand up at the screen, palm out, like you’re about to give it a high-five.

When you do, the music should stop, and a “Pause” banner will briefly appear in the top-right corner of the screen. To resume your tunes, simply raise your hand again in the same high-five gesture, remembering to look at the screen as you do so.

The same gesture will perform a couple of other functions besides pausing and resuming your music. You can also raise your hand to dismiss an alarm or a timer, or if you want Google Assistant to stop talking. (In the latter case, you can also just say “stop” without the “Hey Google” wake word.)

There’s no Camera Sensing on the latest Google Nest Hub, for the simple reason that the Nest Hub Max’s smaller sibling lacks a camera. Instead, you’ll need to enable Motion Sense, a setting that enables the display’s Soli chip to detect movement.

To turn on Motion Sense, you’ll be interacting with the Nest Hub’s display rather than the Google Home app. Just swipe up from the bottom of the screen, tap the Settings button, tap Motion Sense, then toggle on the setting.

Quick Gestures on the Google Nest Hub are a little different than on the Nest Hub Max, and that’s because the Nest Hub can only detect the motion of your hand rather than see it.

To pause or resume music, you hold your hand up with your palm out, just like you would with the Nest Hub Max, except this time you actually push your hand forward; pretend you’re actually giving the display a high-five. The same gesture will shush Google Assistant.

To dismiss a timer or snooze an alarm on the Nest hub, you’ll perform a slightly different gesture. This time, instead of a high-five, you’ll wave your hand in front of the screen, like you’re shooing away a fly. Either left to right or right to left will work, and you can wave with your palm out or do a back-handed wave.

Why your Google display might mistakenly see a Quick Gesture

Quick Gestures for the Google Nest Hub and Nest Hub Max are designed to only work when the display is reasonably sure you intentionally performed the gesture. That said, it’s not unheard of for the screen to mistake an everyday gesture–say, when you’re gesticulating during a conversation–for a Quick Gesture.

It’s certainly happened in my kitchen, when the music from our Nest Hub Max will suddenly cut out in the middle of a tune. It usually means that someone at the nearby kitchen table was waving while making a point, and the next thing you know, no music. Now, the Nest Hub Max is supposed to only register Quick Gestures when you’re looking at its screen at the same time, but it could simply be that an inadvertent but perfectly timed glance at the display is enough to do it.

The same thing has happened with the Nest Hub in our bedroom, which has hit the pause button after an emphatic karate chop in the air on my part.

So, are Google displays constantly pausing tunes by mistake because it’s seeing Quick Gestures everywhere? Personally, I’d say it’s a pretty rare occurrence. But if your Google Nest Hub or Hub Max does mysteriously put your music on ice, you might want to give it a wave before calling tech support.