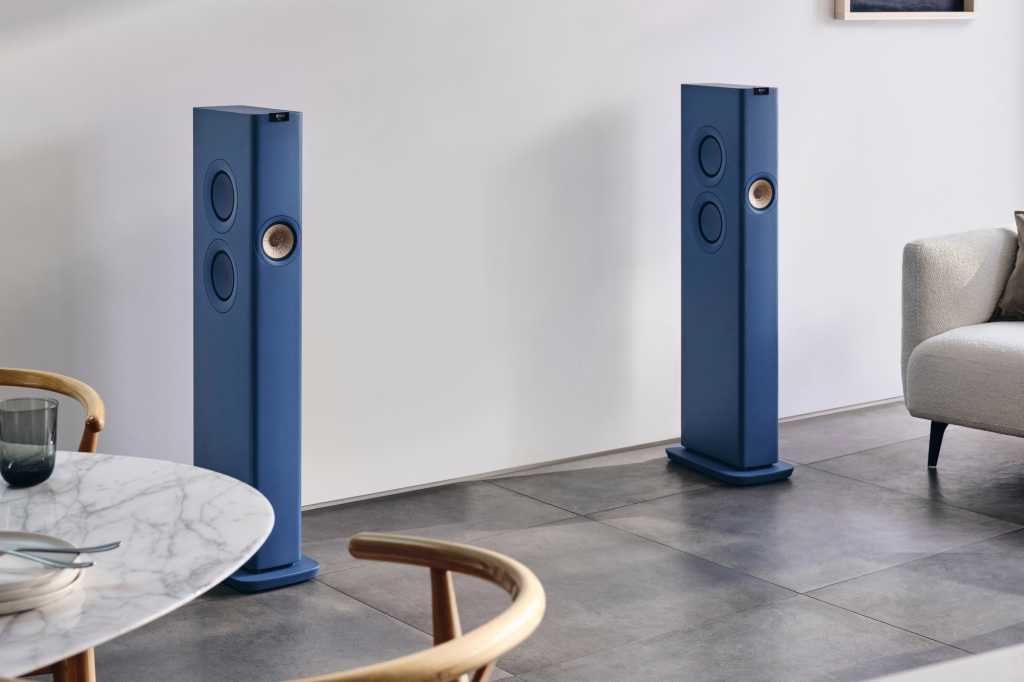 You can’t throw a pillow without hitting a self-powered, streaming bookshelf speaker these days, but it looks like high-end audio manufacturer KEF has the floor-standing streaming speaker market all to itself with the announcement of its KEF LS60 Wireless.

Each tower packs one of KEF’s patented Single Apparent Source Uni-Q drive units (here combining a 0.75-inch aluminum dome tweeter and a 4-inch aluminum dome midrange), plus two pairs of side-mounted 5.25-inch Uni-Core force-cancelling drivers. The latter are designed to maximize distortion-free bass response down to 26Hz. So, there’s need for a separate subwoofer, which we found to be helpful in fleshing out the LS50 Wireless II’s bottom end. Should you find you still need more boom in your room, however, each LS60 tower has a connection for adding a subwoofer.

KEF deploys six Class A/B and Class D amplifiers (three per side, amassing a total of 1,400 watts) to energize each driver as needed (up from four amps/760 watts total in the LS50 Wireless II). Amplification is fine-tuned with KEF’s Music Integrity Engine and “bespoke” Digital Signal Processing algorithms to deliver a “perfectly timed performance,” according to KEF’s press materials. KEF further maintains that its Single Apparent Source technology will deliver “the entire bandwidth of sound so that all frequencies radiate from one single point.” That should make for the same ultra-precise imaging and even-tempered performance across a wider-than-normal listening area that we greatly admired during our evaluation of KEF LS50 Wireless II.

As with its sibling, the KEF LS60 Wireless offers comprehensive connectivity, including WiiFi, Bluetooth, HDMI eARC (for TV sound), digital optical, digital coaxial, and analog RCA connections. Users can link the left and right towers to each other either wirelessly (with streaming up to 24-bit/96kHz), or with a single wired connection for ultra-high-res playback: up to 24-bit/192kHz.

The KEF LS60 Wireless is Roon Ready, and the KEF Connect app makes it easy to stream high-resolution music from Amazon Music, Qobuz, Tidal, and Deezer. You can also tune to internet radio and podcasts. The speakers can be controlled with native apps, including Spotify Connect, Tidal, and QPlay, or you can throw music to them via Apple Airplay 2 (best for bringing in high-res Apple Music), Google Chromecast, and Bluetooth. The system is compatible with the most popular file formats, supports PCM files up to 24 bit/384kHz as well as DSD and MQA (Master Quality Authenticated) files from Tidal.

Priced at $7,000/system, the KEF LS60 Wireless is available for pre-order now, directly from KEF and through KEF authorized dealers. The speakers are expected to ship at the end of May 2022.