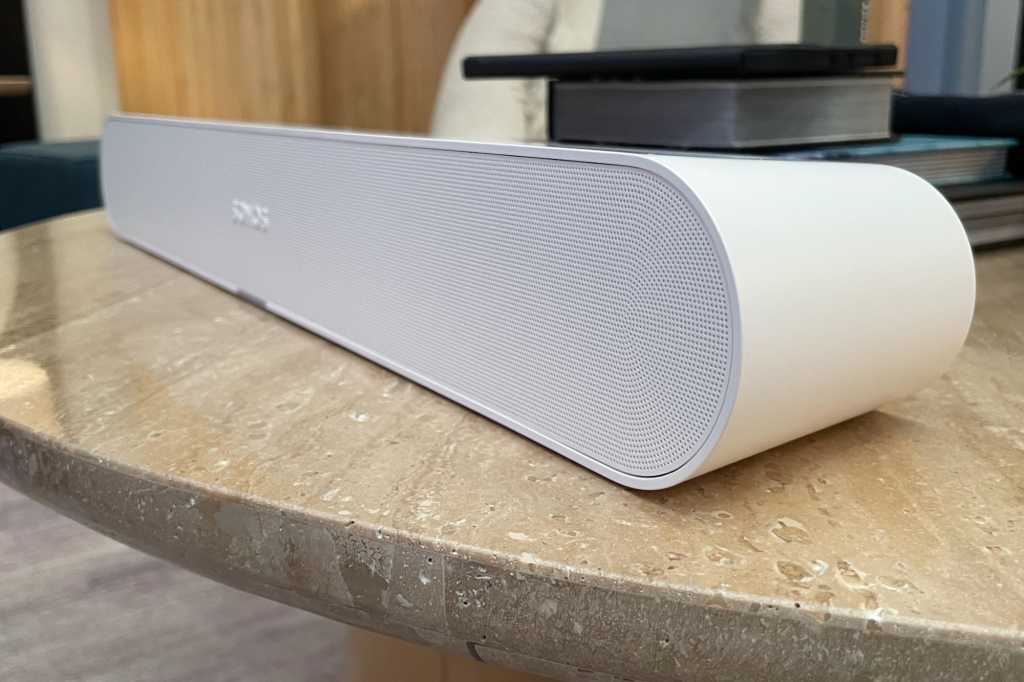 For its latest soundbar, Sonos stripped away such high-end features as Dolby Atmos and side-firing drivers, and it even dropped HDMI. But Sonos still promises top-notch audio from the entry-level Ray soundbar, which I got to see–and hear–at an event in New York on Tuesday.

During the event, Sonos also shared news about its long-awaited Hey Sonos voice assistant, and it also showed off new colors for the portable Sonos Roam.

To hit that price point, Sonos pared down the number of powered drivers in the 3.0-channel Ray compared to the Beam and the Arc, which pack five and 11 drivers respectively.

The Ray comes with a total of four drivers, including two “high-performing” tweeters with split waveguides that “project sound from wall to wall,” along with two full-range midwoofers; each of the four drivers gets its own Class-D amplifier. A bass reflex system with a low-velocity port design supplies the low frequencies.

Also missing is support for Dolby Atmos, which means the Ray won’t be able to deliver height effects; instead, you can expect standard Dolby and DTS audio.

Finally, the Ray lacks an HDMI connector, a standard feature for even bargain-basement soundbars these days. Instead, the Ray makes do with an optical (Toslink) input, which can deliver multichannel Dolby, DTS, and PCM audio, but not Dolby TrueHD, DTS-HD Master Audio, or any of the object-based audio formats.

I spoke with record producer Giles Martin, who also serves as Head of Sound Experience at Sonos, at the New York event, and he argued that the Ray’s single optical input is a “quick and elegant solution” for the entry-level, non-Atmos soundbar.

But while Sonos has shaved HDMI, Atmos sound, and extra speaker drivers from the Ray, it left many signature Sonos features intact, namely Sonos multi-room audio, AirPlay 2, and Trueplay, the Sonos room-correction feature that lets the speaker measure the acoustics of a room with help from an iPhone’s microphone.

Even better, you can upgrade the Ray’s sound with additional speakers, just as you can with the Beam and the Arc. For example, you could add a Sonos Sub and a pair of Sonos One speakers to the Ray, which would bring the soundbar up to a 5.1-channel configuration.

Measuring 22 x 3.74 x 2.79 inches and weighing in at 4.29 pounds, the Ray comes with a flat front grille and is considerably smaller and lighter than the Beam and (especially) the hefty Arc, making it a good candidate for a studio apartment or a second room.

Sonos also says that it designed the Ray’s acoustic package to be forward-facing, meaning you can slide it into a TV cabinet without worrying about blocking the sound. Of course, you could also just place it in front of your TV, or mount the Ray on a wall under your TV using an optional mounting bracket.

The soundbar’s optical input sits in a rear compartment alongside a fast (10/100 Mbps) ethernet port. On top of the soundbar are the familiar Sonos touch controls, which let you play and pause tunes as well as swipe to skip tracks.

To show the Ray in action, Giles and other Sonos execs teed up scenes from Ford v Ferrari, Spider-Man: No Way Home, and Venom. At first blush, the compact soundbar sounded fairly impressive, with crisp, appealing sound, a decent amount of bass, and clean, clear dialog.

Of course, I was only able to hear the Ray for a few minutes while sitting at one side of a small, crowded room with a concrete floor–hardly the ideal venue for kicking the tires of a soundbar. While I liked the little that I heard, I’ll reserve my final judgment until I’ve spent quality time with the speaker.

Details of the Sonos Ray were leaked well in advance of this week’s official kickoff event, but one of the juciest rumors–that the Ray could be positioned vertically for use as a surround speaker for the Beam or Arc–didn’t pan out, or at least not yet. When I asked Giles about the rumored feature, he chuckled and denied that it had ever been considered.

Besides the Ray, Sonos also unveiled the Hey Sonos voice assistant; you can read more about Hey Sonos right here.

The three new Sonos Roam models are on sale for $179 each, same as the original white and black versions.

I’m hoping to get a test unit for the Sonos Ray soon, so keep your eyes and ears peeled for a full review.