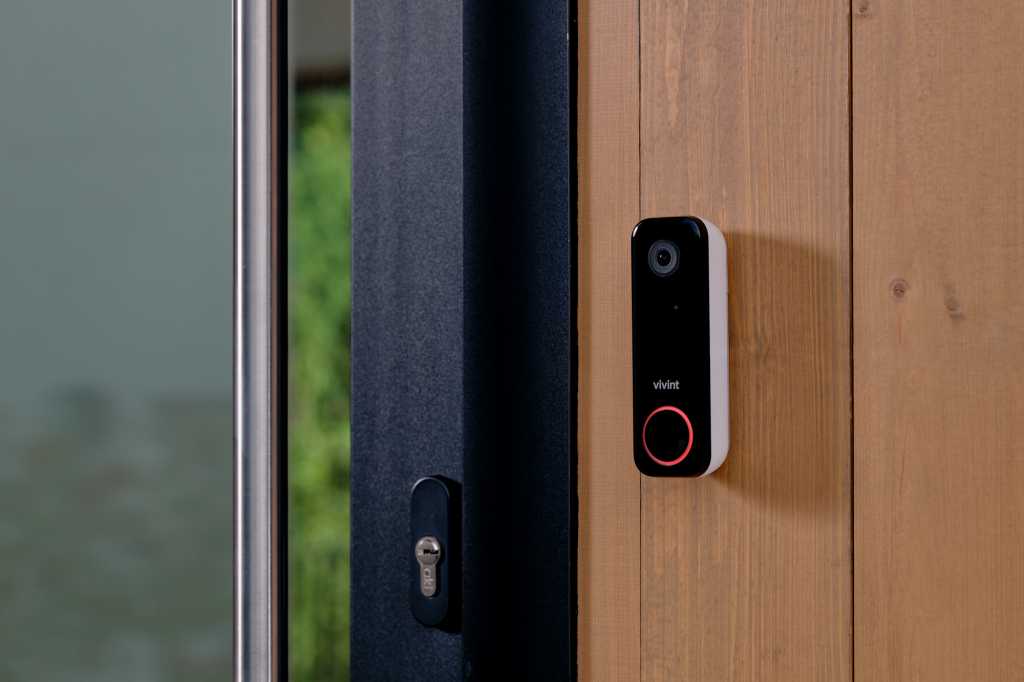 Vivint Smart Home builds our favorite wired video doorbell, but the company isn’t resting on its laurels. Vivint now has an even more sophisticated model. The company will soon ship all-new versions of its indoor and outdoor security cameras, too, plus an add-on smart spotlight for the outdoor model.

The Gen 2 Vivint Doorbell Camera Pro ($249.99) features the same high resolution (1664 x 1664 pixels) and generous 180 x 180-degree field of view, but Vivint says the camera’s image sensor has been upgraded for superior HDR and better night vision. The LED light ring that glows to inform visitors they’re on camera has been enlarged—as has the button it encircles—and there’s a louder (90dB), clearer speaker for two-way conversations. As with the original model, if someone approaches your porch after a package has been delivered, the doorbell’s light ring will glow, and its speaker will sound off again in an effort to deter porch pirates. If that doesn’t work, the doorbell will at least inform you when a package is removed from your porch.

Each of Vivint’s new security cameras, including its doorbell, will come equipped with a 64GB microSD card onboard for 24/7 encrypted recording—even if your Wi-Fi network goes down. Vivint estimates this capacity should be sufficient for up to 10 days of continuous video. An improved computer-vision chip, meanwhile, promises to reduce spurious notifications triggered by motion other than people. And unlike many competitors, Vivint’s doorbell supports both 2.4- and 5GHz Wi-Fi networks. This is a wired-only doorbell, relying on the low-voltage wiring (12-24 DC, 16-24 AC, 1.0A minimum) your existing doorbell uses.

Being a component in a broader Vivint Smart Home system, the doorbell can also be integrated with a smart lock, so you can remotely unlock the door to allow a visitor to enter. Unlike Vivint’s current doorbell, however, you’ll need to have a broader smart home system in place to get the second-gen model. The base price for a starter system is $599 installed, with professional monitoring plans starting at $19.99 per month.

Also getting a thorough overhaul: Vivint’s outdoor security camera. While the Vivint Outdoor Camera Pro streams and records video in 1080p, its 4K HDR image sensor ensures that you’ll always get a detailed view of what’s happening in your yard, even when you zoom in. The camera’s night vision has been improved with higher-power infrared LEDs, and its 140-degree field of view will put a large area under surveillance—with user-defined motion detection zones to fine tune the area you want monitored, plus a 360-degree ball-joint mount to ease positioning.

If human motion is detected in the camera’s field of view, an LED light ring around the camera’s lens will glow and an onboard 85dB speaker will sound a warning to deter anyone from lurking in your yard. The camera also supports two-way audio. As with Vivint’s other new cameras, this one will come equipped with a 64GB microSD card for encrypted recording 24/7. And should your Vivint system go into an alarm state, the outdoor camera can sound its own siren to call attention to your home. The second-generation Vivint Outdoor Camera is available now for $399.99.

Vivint currently supports Philips Hue lighting products and user-installed Z-Wave smart switches and dimmers on its smart home system, but the Vivint Spotlight Pro is its first native offering in that space. An add-on accessory that integrates tightly with its new outdoor camera, the Spotlight Pro hangs beneath the camera and delivers 2,000 lumens of brightness (with a color temperature of 5,000 degrees Kelvin) with 180 degrees of coverage, up to 25 feet out from the camera.

Unlike any camera we’ve seen to date, when the connected camera is in its “deter” mode that sounds an audible warning when a person lingers in your yard, the Spotlight Pro will use the camera’s person- and motion-detection capabilities to put a spotlight on a person entering the camera’s field of view. It will then dynamically adjust that spotlight to track the person’s movement. If a person persists in hanging around your yard, Vivint says its new light “will escalate to a more dramatic lighting effect to deter potential thieves.”

When the camera is not in deter mode, the spotlight is designed to offer a softer, ambient light as you or your visitors walk about your property. You’ll also be able to control which of the wrap-around LEDs are operable, to avoid irritating your neighbors by shining lights into their yards. Vivint says it expects to ship the Vivint Spotlight Pro in July for $249.99.

The new Vivint Indoor Camera Pro is an even bigger improvement over the company’s last indoor offering, the barrel-shaped Vivint Ping Camera, but it carries over one of that product’s best features: a call-out button that allows a family member at home to initiate a two-way call with an authorized user. It’s a great way for latchkey kids to let their parents know they’re home.

The new camera boasts a much sleeker industrial design than the original, with an articulated hinge that makes it easy to aim the camera whether it’s resting on a countertop or mounted to a wall or ceiling. Like the new doorbell, this camera gets a new computer vision chip that can detect when people are in your home, and it supports user-defined detection zones. A new audio analytics feature will monitor your home for the sound of breaking glass and carbon monoxide detectors, enabling the camera to send an alert to the Vivint control panel and directly to the user in an emergency. To enhance user privacy, the Vivint Indoor Camera Pro can be configured so that it’s actively recording video to its onboard microSD card only while you’re at home and your security system is set to armed-away mode.

Vivint expects the Indoor Camera Pro to be available later this year for $199.99.