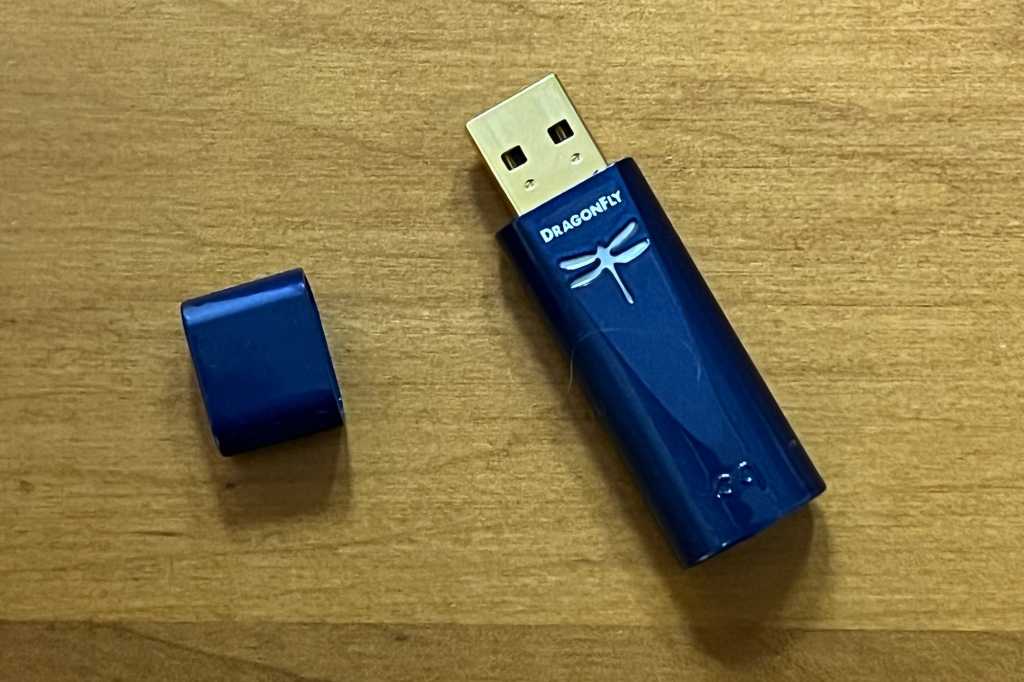 An external DAC is an essential purchase for anyone looking to stream hi-res music from services like Apple Music, Qobuz, or Tidal, and the DragonFly Cobalt combines portability with incredible quality.

If you’re a subscriber to Apple Music, Qobuz, or Tidal, you’ve got access to a large and growing library of better-than-CD quality audio, and you can’t enjoy that higher resolution music via wireless Bluetooth headphones. You need wired headphones and a dedicated DAC plugged into your device to get the complete picture.

AudioQuest’s line of DragonFly DACs is the perfect gateway into hi-res audio for anyone who does most of their listening on a mobile device or desktop computer. The DragonFly Cobalt is the manufacturer’s top-of-the-line option, and it’s a pocket-sized miracle that combines portability with incredible quality. It’s not perfect, but it’s close.

What the DragonFly Cobalt does

A DAC is a digital-to-analog converter, a device with a chip that does just what the name implies, taking the digital streaming signal and rendering it into an analog format for playback. Every device that plays digital music files has a DAC built in, but the ones included with smartphones, tablets, and computers don’t offer the same audio quality as you’ll find with most any dedicated DAC.

The DragonFly Cobalt is among the most compact and best-sounding DAC-and-headphone amp combos you can buy. The device is roughly the size and shape of a USB drive; indeed, it could easily be mistaken for a dime-a-dozen thumb drive, so you’d be well advised to keep it in the included vinyl pouch. The Cobalt draws its power from the device it’s plugged into, which means it doesn’t have a battery that requires charging before you use it.

What’s inside the DragonFly Cobalt

The DragonFly Cobalt uses a Sabre ES9038Q2M 32-bit audio DAC with a 140dB dynamic range and a Sabre 9601 headphone amplifier.  AudioQuest designed the DragonFly series in concert with legendary Wavelength Audio founder Gordon Rankin, one of the true pioneers of USB audio. Tidal users should investigate the Cobalt because of its built-in MQA renderer, which works seamlessly to unfold the audio.

If the $329.95 DragonFly Cobalt is too expensive for you, AudioQuest has two other options. The DragonFly Red ($229.95) offers the same 2.1-volt output and ESS Sabre 9601 headphone amp but uses a Sabre ESS 9016 DAC instead of the top-of-the-line ES9038Q2M found in the Cobalt. The DragonFly Black ($119.95) uses a Sabre ESS 9010 DAC and a Texas Instruments TPA6130 headphone amp with 1.2 output voltage. Each step up the ladder is worth the extra cost, but even the Black will far surpass your device’s built-in DAC.

How to Use the DragonFly Cobalt

Using the Cobalt with an iOS or Android device is dead simple. Just connect an adapter (more on that in a moment) to plug the DAC into an audio source, plug your headphones into the Cobalt, and you’re ready to go.

A playback status light tells you the bitrate of your source with red (standby), green (44.1kHz), blue (48kHz), yellow (88.2kHz), light blue (96kHz), or purple (MQA) readouts. Confusingly, lower-resolution Ogg Vorbis files from Spotify or MP3s from other sources also get a green light from the DAC, even though their resolution is less than 44.1kHz. Still, even those lower-resolution files will sound better with the Cobalt.

Connecting and configuring the DragonFly Cobalt

Android users whose devices have USB-C connections can use the included DragonTail USB-A to USB-C adapter to connect the Cobalt. If your iOS device has a lightning connection port, then AudioQuest recommends that you use Apple’s Lightning to USB 3 Camera Adapter to connect the DragonFly. The $39 Apple adapter is a less elegant solution than the DragonTail, but virtually every portable DAC manufacturer suggests the same workaround for Apple’s lightning connector.

The settings are a bit more complicated if you’re using the DragonFly Cobalt with a computer. With a Windows machine, you’ll have to access the Hardware and Sound control panel and dig into the advanced settings to set your playback sample rate.

On a Mac, you’ll need to go to the Sound panel in System Preferences and set Output to “DragonFly Cobalt.” Next, you open the Audio MIDI Setup app and select the Cobalt for sound output, and then set the correct sample rate for the music you’ll be playing.

If you want to get the most out of the Cobalt, you’ll have to choose the right sample rate each time you use a computer for playback. That’s a function of how each operating system works and thus not a design flaw, because you’ll face the same issue with any DAC you choose.

Listening to the DragonFly Cobalt

And Nothing Hurt, the new album from UK band Spiritualized, is streaming in CD quality from music services that offer that resolution. Listening on an iPhone with Focal Celestee headphones, there’s a startling difference when switching to the DragonFly Cobalt from Apple’s lightning-to-3.5mm headphone jack adapter.

The added depth and detail from the Cobalt is immediately apparent, especially on a track like “The Mainline Song” that features elaborate train sound effects and a choir. The mix features incredibly precise shifts in volume between tracks, and the Cobalt lets you hear a level of detail that the Apple iPhone DAC just can’t reproduce.

Even more impressive is Decca’s excellent new compilation LP Boom! Italian Jazz Soundtracks at Their Finest (1959-1969), streaming in 24-bit/96kHz on Qobuz. Sure, you can buy a 2-LP vinyl version or even a CD and get the liner notes, but there’s no way those formats are going to offer the same listening experience as you’ll get with hi-res files through a DragonFly Cobalt.

Even if you haven’t invested in a pair of expensive cans like the Focals, a DAC like the DragonFly Cobalt will still make a remarkable difference if you’re using a standard studio model, such as Sony’s MDR-7506 headphones.

Wireless headphones are good for walking the dog, commuting to the office or working out at the gym. But more concentrated listening deserves the better reproduction a DAC can offer, and the compact and terrific-sounding DragonFly Cobalt is one of the best DACs we’ve ever tried, even if it’s on the pricey side.