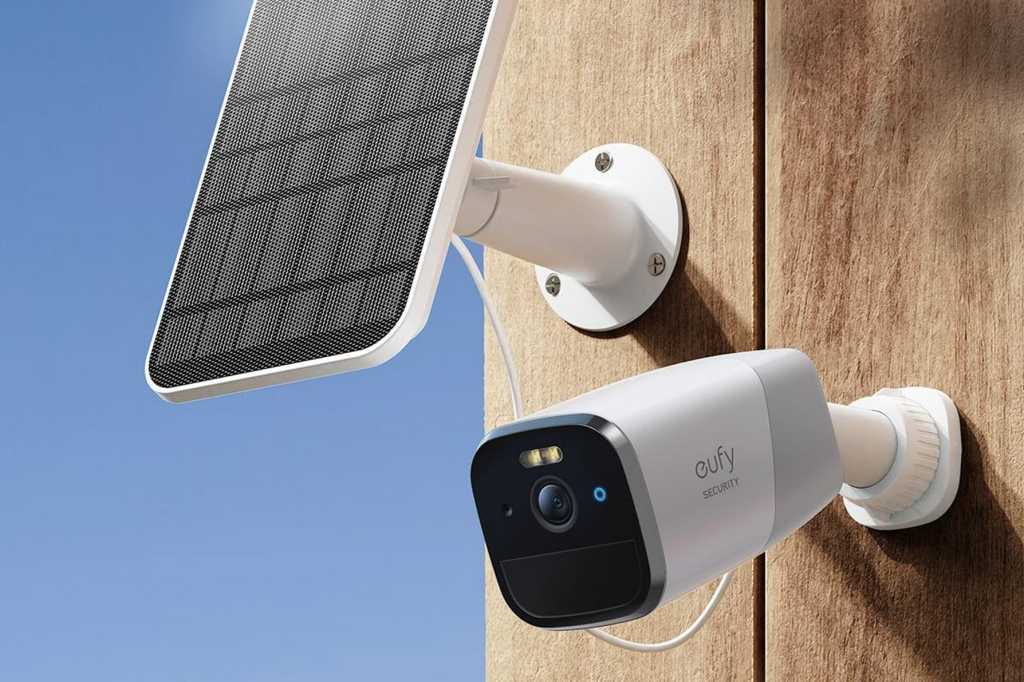 Image: Eufy Security
At a glance

Perfect for out-of-the-way locations, the Eufy Security 4G Starlight Camera can be set up and left to observe the world with virtually no maintenance or charging.

As reviewed: $269, including solar panel; also available without solar panel for $249

Anker’s latest home gadget is a wonderfully well-thought-out security camera that is as self-sufficient as it gets these days. In addition to tapping into a 4G mobile data network instead of Wi-Fi for greater reliability, the Eufy Security 4G Starlight Camera has an optional solar panel so you can say good-bye to recharging its battery. The camera operates on AT&T’s network in the U.S.; residents in the U.K. and Germany can choose from several networks, including Vodafone and Deutsche Telecom.

Protected by IP67 weatherproofing, it can stand up to extremes for temperature, rain, snow and dust, and can be set up just about anywhere. Measuring 4.6 x 2.6 x 7.6 inches (HxWxD), the 4G Starlight Camera is on a par with other outdoor cameras but is about one-quarter smaller than the Arlo Go 2 camera. Unlike the Lorex Smart Home Security Center, however, the Eufy Security 4G Starlight Camera doesn’t have a console for consolidating the video from one or several cameras; everything flows through the Eufy Security app.

In addition to being able to record video in daylight and the dark of night, the Eufy 4G Starlight Camera uses artificial intelligence to differentiate between general movement and humans. It promises to reduce false alarms, such as from small animals roaming about or wind rustling the trees. If the camera is ever stolen, it can be tracked using its built-in GPS receiver—at least until its battery runs out of juice.

Under its white and gray skin, the Eufy Security 4G Starlight Camera has a sophisticated camera that can capture video in resolution of 2592 x 1944 pixels while taking in a 120-degree field of view. That’s significantly better than the Arlo Go 2’s 1920 x 1080 resolution, but second best compared to the 2688 x 1520 specs of the Amcrest 4MP UltraHD WiFi Camera. And unlike that camera, this Eufy model is not capable of panning or tilting to key in on a particular place.

While most security cameras move their data over a Wi-Fi connection, the Eufy 4G Starlight Camera uses a different route. It has a SIM card slot for connecting to a 3G/4G LTE mobile data network. In the U.S., it is currently limited to operating with an AT&T data-only SIM card. The company plans to add compatibility with Verizon soon. The camera can’t get online with the newer and faster 5G network.

The kit comes with a USB-C cable (but, alas, no AC adapter) for charging the 4G Starlight Camera’s 13 amp-hour battery; Eufy says it should last about three months with typical use. Purchase the camera its optional solar panel, as reviewed here, and you can keep the battery perpetually topped off, given adequate exposure to sunlight. The 7.3 x 4.5 x 1.0-inch panel can generate up to 2.5 watts of power, and Eufy engineers told me it can add three days of battery life for every sunny day it sits absorbing sunlight.

With a microphone and speaker in the camera, the 4G Starlight Camera can be used as a two-way intercom with the app. If you like, the audio can be turned off. The video is secure, requiring two-factor authentication for access and 8GB of eMMC local storage. The camera would be even better if it had microSD card so you could expand that storage.

Because it uses 4G data networks, getting the Eufy 4G Starlight Camera online started with inserting my AT&T data SIM card. Make sure the card’s connectors are facing up or the card won’t seat properly. Next, I installed the Eufy Security app and created an account. There are versions for iPhones and iPads as well as for Android devices.

Next, I pressed the camera’s Sync button to start it up and then tapped “Add Device” on my Samsung Galaxy Note 20 phone. After I picked the type of camera I had, I shot the camera’s QR code with the app and it started connecting. A minute later it was online. Finally, I needed to choose between optimal battery life (with the camera limited clips to 20 seconds long) or optimal surveillance (with 1-minute clips). The video length can be customized as well.

The app works well with the camera and shows the battery status and network signal strength. A few seconds after tapping the play button, the camera began feeding its stream to the app. There’s the choice between the app’s vertical view as a small window or horizontally across the entire screen. Along the bottom are icons for manually starting a recording, taking a screen shot, using the camera as an intercom with the app.

A level below the surface, the app’s Settings let me see any Events, adjust the camera’s night vision, and customize its alarm. It can be set up for home or away use, managing the location, or to capturing video on a schedule. The best part is the ability to fine-tune the motion detection on a one-to-seven scale, set it for humans only or all motion, and create an activity zone outside of which the device ignores movement.

The Eufy Security 4G Starlight Camera in the real world

With its wide view and 2K resolution, the Eufy Security 4G Starlight Camera was able to keep an eye on my home. Its video stream is time and date stamped for easily getting to the right moment in time. The recorded clips are available from the Events menu and allow downloading from the camera to the phone, deleting, or sharing over a variety of portals.

Quick to respond and able to show detailed video, I was able to zoom in by double tapping the screen, although the images quickly got pixelated. The 4G Starlight Camera doesn’t work with Eufy’s HomeBase hub, nor does it connect to Apple’s HomeKit ecosystem. It does work with Amazon Alexa and Google Assistant.

The solar panel’s ability to keep the battery charged was a huge advantage. The 4G Starlight Camera ran without intervention for more than a month over the late spring and early summer. It’s ability to connect to the internet without depending on Wi-Fi makes it a screen gem. In addition to viewing the video, I remotely used the built-in spotlight one night to see a racoon who was just as startled as I was. Eufy plans to add an optional camouflage cover for the camera to make it blend in better or to be used as a critter-cam. Happily, I never had to use the siren, but it’s plenty loud.