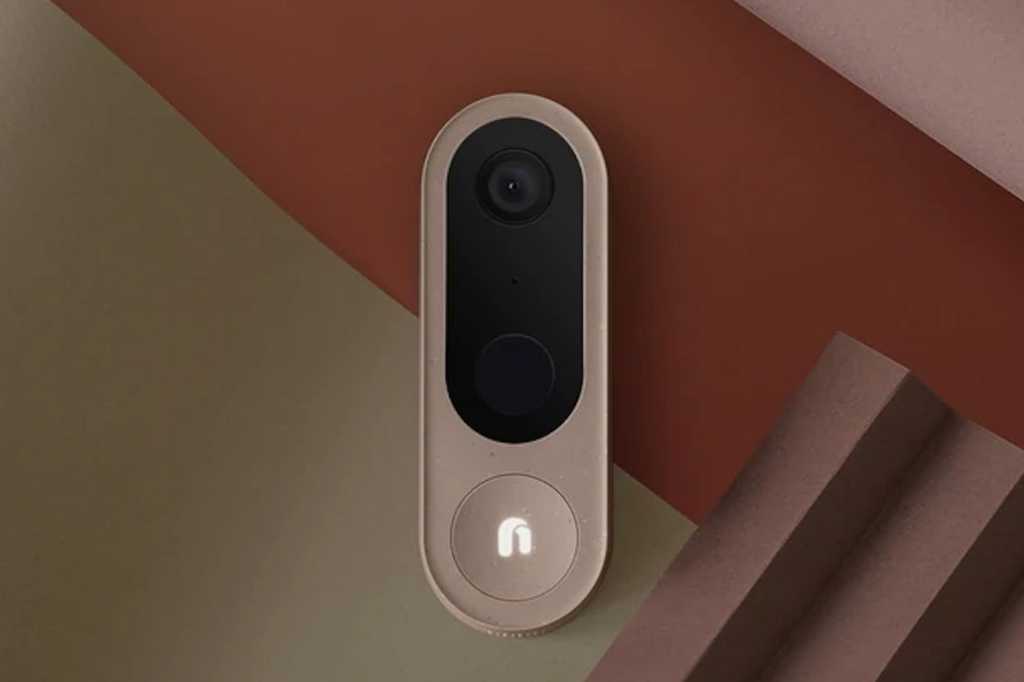 Image: Nooie
At a glance

Perfect for new home construction or for retrofitting a broken doorbell, the battery-powered Nooie Cam Doorbell makes adding a smart camera to your porch easy.

Whether you’re building a new house or want to retrofit a broken chime with a smart camera, the Nooie Cam Doorbell does the trick with easy setup, a wide field of view, and the ability to integrate with Alexa or Google Assistant. While it’s twice as pricey as such competitors as TP-Link’s Kasa Smart Doorbell, the $149 Nooie Cam Doorbell Review comes to market with a key feature: the ability to send video over both the 2.4- and 5GHz Wi-Fi bands.

Rather than relying on the low-voltage wiring of an existing doorbell chime, the Nooie Cam Doorbell starts from scratch. The kit comes in two parts: a battery-powered video doorbell as well as a plug-in networking hub and chime. Together, those two parts can help replace a broken bell or outfit a new home with a smart video doorbell from the start.

Matching the best smart doorbells on the market, the Nooie Cam Doorbell arrives with IP65 weatherization, which denotes a completely dust-tight design as well as resistance to low-pressure water jets from any angle. That means the doorbell is tough enough to be installed out in the open, without the need for the protection of an overhanging roof.

At 6.1 x 2.34 x 1.5 inches (HxWxD), the Cam Doorbell is roughly twice the size of other smart doorbells we’ve reviewed, such as Belkin’s Wemo Smart Video Doorbell. Still, the Nooie isn’t terribly obtrusive, and its speckled brown case easily blends into a door frame. Inside, the huge 9.7 amp-hour battery takes up about a third of the unit’s bulk.

The doorbell’s center of attention is the camera lens at the top. When mounted 44 inches high (which is roughly where you’d want to mount any video doorbell), it should provide a panoramic view of your porch, and can catch someone standing a few feet away. A large ring button sits on the lower third of the doorbell’s face, while an infrared sensor for the night vision camera is situated between the ring button and the camera lens. Underneath, the unit has a small speaker for sounding a ringtone or for speaking with visitors.

The Cam Doorbell connects with the system’s networking hub, which boasts a fabric covering that looks a lot better than the plastic units bundled with competing doorbells. Measuring 4.5 x 1.9 x 1.2 inches (HxWxD), the 2.4GHz- and 5GHz-enabled Wi-Fi hub doubles as a doorbell chime. There are no chime extensions available, though.

The Nooie Cam Doorbell comes with all the gear needed to start seeing who’s at the door. Not included, however, are any tools that might make the physical installation easier, such as a drill bit or screwdriver. The booklet was a big help in getting started, and Nooie’s website has explanatory videos.

After I located where I wanted to put the doorbell, I used the included stick-on template to mark where the screw holes should go and attached the doorbell’s mounting plate to the door frame. Also in the box is a wedge adapter to aim the camera by 15 degrees to either side, but I ended up not using it.

Once I charged and installed the battery, I snapped the doorbell unit into the mounting bracket, and its LED blinked orange to show it was ready while the base station glowed blue. After I tapped Add Device on the Nooie app, the screen let me choose Cam Doorbell.

Unlike most of its competitors, the Nooie Cam Doorbell uses both the 2.4- and 5GHz Wi-Fi bands for greater flexibility; you can also connect the doorbell to your router using the included CAT-6 networking cable.

Start to finish, it took 15 minutes to unpack, install, and start seeing video from the doorbell.

Inside the Nooie Cam Doorbell

The Nooie Cam Doorbell’s bulky battery can power the unit for up to about three months of typical use, according to Nooie engineers. The Nooie app will warn you if you’re putting too much strain on the battery; for example, if you stream video for more than a minute at a time. To charge the battery, you need to remove it and use the included USB-C charging cable; just be aware that there’e no AC adapter included with said charging cable.

The camera itself is a gem that can not only show you who’s at the door but also pick up porch pirates and roaming animals. Its 3-megapixel camera streams 2560 x 1440 video that’s slightly more detailed than the Kasa Smart Doorbell’s 2304 x 1296 resolution video, and much sharper than the HD resolution of the Ring Video Doorbell.

The Nooie Cam Doorbell’s 158 degree field-of-view is on a par with doorbell cams from Logitech, Kasa and Netatmo, but can’t scan as much territory as the Wemo Smart Video Doorbell, which offers a 228-degree visual reach. The Nooie is a night owl as well, with an infrared sensor that’s centered on the 940-nanometer wavelength. The adjustable sensor can peer 5, 10, or 20 feet into the darkness, perfect for catching a late-arriving guest or a dog rummaging through the garbage. But while the camera boasts people detection, there’s no pet or vehicle detection.

The doorbell sends its video via the base station in the popular H.264 video format for viewing on the Nooie app; there are nearly identical versions for Android and iOS phones and tablets. The stream can be integrated with Alexa or Google Assistant voice control, but the Nooie Cam Doorbell isn’t compatible with Apple HomeKit.

The Nooie app is the center of attention for the Cam Doorbell. The main page not only shows that the camera and base station are online but also the strength of the Wi-Fi signal and the doorbell’s battery level. There’s even a multi-stream page if you have other cameras.

In addition to its live video feed, the Nooie Cam Doorbell can show archived videos, and the app keeps track of its actions with an easy-to-read log. The base station holds a microSD card for storing video locally; it worked well with a 64GB card.

The company’s Nooie Cloud servers can store and share recorded video clips in the cloud–7 days of video storage costs $1 a month or $10 a year, while 30 days of storage will set you back $3 a month or $30 a year–but there’s no requirement to do so.

After several weeks of use, the Nooie Cam Doorbell stood up to rain, sleet, and the dust and dirt from leaf blowers.

The camera provided clear and vivid video that was especially good when the subject was about four feet from the door, and it had less circular barrel-image distortion than cameras with a wider field of view. After someone rings the bell, the app can transform the Nooie into an intercom, handy for telling delivery people to leave the package at the door or in the back.

The app can be set to use two-factor authentication for extra security. But overall, it was slow to respond, taking as long as 20 seconds to display a selected video or register an adjusted setting (I tested the Android version). Once, the app got stuck in the middle of a firmware upgrade that necessitated restarting the camera.

The doorbell offers the choice of four ringtones; a fifth can be downloaded. The tones can sound on either the doorbell or the base station. While I don’t mind the doorbell’s synthesized ringtones, they do sound a bit cheap compared to a physical bell.

Easy to set up and use, the Nooie Cam Doorbell can let you know who’s at the door but falls short by not being able to integrate with Apple HomeKit gear.