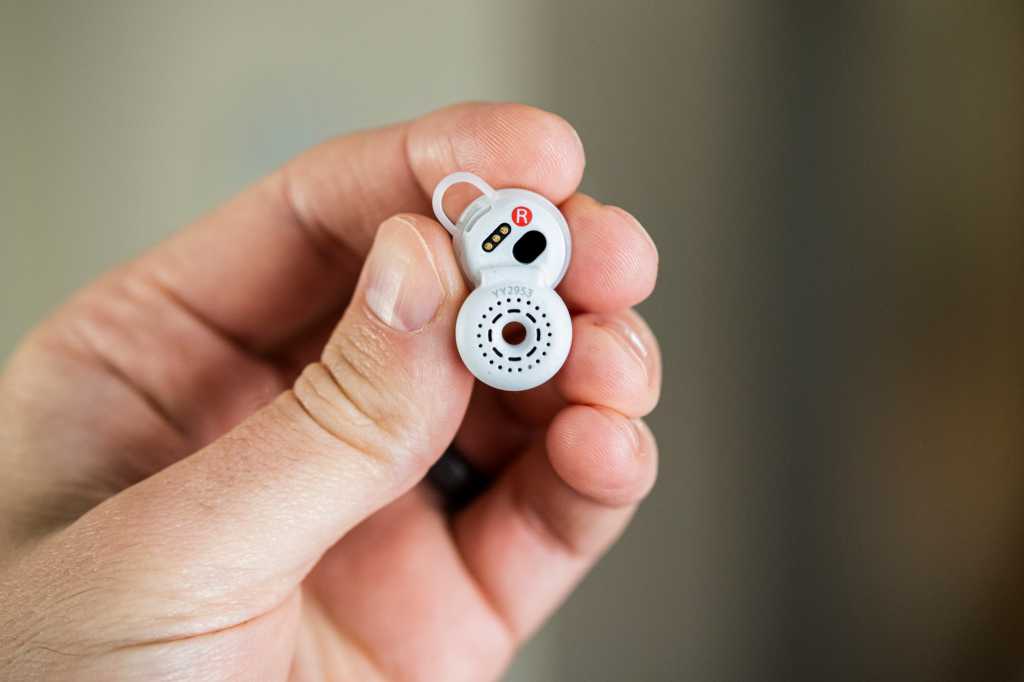 The Sony LinkBuds’ open-back design offers a truly unique experience with lots of benefits, but a longer list of caveats makes them hard to recommend to most people in the market for earbuds.

Over-the-ear headphone lovers like me are familiar with open-back headphones; open-back earbuds like the Sony LinkBuds are another matter. Both types of headphone allow sound from the outside world to mix freely with whatever music you’re listening to, providing improved situational awareness while you’re out and about.

Sony accomplished this with the LinkBuds by designing the portion of the earbud that sits over your canal to be circular with a hole punched out–they look like donuts sitting in your ear. This isn’t Sony’s first attempt at a ring-based driver, but this is the first one the company has pushed hard to the mainstream. The LinkBuds retail for $179.99 and feature some compelling reasons for why you should consider them. Sony has gotten a lot of things right with the LinkBuds, and I’ve really enjoyed my time with them, but there are just too many little nagging issues that hold me back from recommending them without caveats.

Before I dig into the details of the Sony LinkBuds themselves, I want to answer a question many of you might be having: why would someone want an open-back design? Most of the popular earbuds–the Apple AirPods Pro and the Samsung GalaxyBuds 2, for example–feature a sealed off “closed” experience, but there are many reasons why an open design can be beneficial. I actually prefer an open design, especially when I’m out and about. It allows for much more situational awareness, and it offers security in times where I need to be more aware of the sound of approaching traffic or announcements on a public address system at an airport or train station.

And of course it allows me to chat with someone and not have to worry about pulling out an earbud to fully hear what they are saying. Sure, most earbuds feature some sort of electronic passthrough mode that uses the onboard microphones to mix in the ambient sound to what you are listening to. And that can come close to sounding natural, but it just isn’t the same experience. Nothing has come close to what physical passthrough you get with the LinkBuds. I should note that the LinkBuds do block out a bit of the incoming noise, so it’s not a completely transparent listening experience, but I’d say it allows about 90 percent of the natural sound to pass unaffected.

The other major advantage to an open design–soundstaging–appeals to the audiophile minded. In general terms, soundstaging helps you perceive the location, size, and distance of the sound being produced. When wearing earbuds and headphones they are literally sitting right against your ears, but each model produces a different feel to the ‘stage’ of what you’re listening to. An open design allows for wider staging. I personally don’t like feeling as if speakers are inside my ear and very much prefer to feel like the sound is mixed in with the overall environment. Some might see this as a downside, I see it as a positive. The choice to pick open-backed headphones is, therefore, very much a personal one.

Let’s start with the LinkBuds’ very unique hardware features. Each small earbud consists of two sections: There’s a bulbous segment housing the electronic components, including the battery and microphone, and there’s a donut-shaped segment housing the driver. When inserted into the ear, the driver ring sits over your canal and the bulbous segment is placed in the larger, recessed area of the outer ear (the concha cavum, to be precise). It’s wedged in place by a silicon ring that pulls over the bulbous area of the earbud and presses against the upper part of the concha cavum. In order to fit in various sizes of ears, Sony provides several sets of silicone rings, each of which has a different-sized extension. I used the medium size, but you’ll get two sizes in each direction for a total of 5.

It’s an oddly shaped and weirdly fitting system compared to standard earbuds. For the first two weeks of my testing, I was actually wearing the large-sized silicone rings, but I soon noticed the bulbous segment starting to protrude more than I expected. Once I switched to the medium size ring, the headphones stayed in place just fine while inflicting less pressure on my ears. My wife was very excited to try out the LinkBuds, but was quickly let down as the earbuds just didn’t fit comfortably in her very small ears, even without any silicone ring attached. Ear shapes are so varied that it’s really hard to recommend the LinkBuds without the caveat that you just might not find a perfect fit.

The sound-producing half of the Linkbuds is small, but the earbuds’ overall size is comparable to that of other in-ear headphones, including the Samsung Galaxy Buds and the OnePlus Buds Pro. Unlike those other headphones, however, the LinkBuds fall short in the battery department, probably due to their odd shape, which doesn’t leave a lot of room for a battery. Sony says the earbuds themselves should last 5.5 hours, with an additional 12 hours provided by the charging case. But I found myself thinking “Low battery on the case already?!” more often than I have with any other earbud I’ve tried. The case itself is one of the smallest I’ve seen, so I gladly would have traded a larger one for a bigger battery. One more small note on the case: I appreciate a good fidget item, and I didn’t get much joy fidgeting with the latch on the LinkBuds’ case.

Sony’s Headphones Connect software is consistently excellent, providing a bevy of customization options in an easy-to-use interface. Since my WH-1000XM4 over-ear headphone review, Sony has added activity tracking, a handy feature–especially for a reviewer like me. You’ll also find a simple 5-band EQ with presets, a setting to pause playback when you remove the earbuds, auto power-off, and lots more. The LinkBuds support Sony’s 360 Reality Audio, DSEE (Sony’s AI up-sampling), and Speak-to-Chat (which pauses the music when you start talking). These add new ways of enjoying your music, but I’ve found them to be not much more than gimmicks that don’t really add much value.

Apart from the typical customizable tap controls that can trigger everything from Google Assistant to play and pause, the LinkBuds feature a new Wide Area Tap option that is toggled on by default. With Wide Area Tap enabled, the earbuds detect taps in front of your ear, like on the upper jaw and cheekbone, which works in conjunction with tapping the actual earbud. It’s a fun idea, and it worked pretty well–so much so that I never ended up tapping the earbud itself. Unfortunately, it works too well. Almost every day, a tap would be registered by eating–maybe I have really strong jaws or a very hollow head; either way, this was really annoying. On top of that, I find myself needing to press on the earbuds to get them back into place, which unfortunately activates the assistant (by default) 50 percent of the time.

So, after all this talk about the unique design, how do the LinkBuds sound? Well they actually sound pretty natural. As I mentioned earlier, the open-back design provides great soundstaging, which helps with instrumentation placement and separation. It’s not as forward projecting as I personally like from over-ear cans, but it’s leagues better than most earbuds and fake surround-sound software. Musically, however, I just couldn’t find much to love while using the LinkBuds. What they mostly lack is low-end thump, another open-back trait. There just isn’t enough in these tiny drivers to push bass frequencies, and since it’s not sealed off, there’s no bass buildup; by nature, open-back headphones will always struggle with this. More surprisingly, I also encountered a lack of top-end clarity–the frequencies that offer crystal-clear definition to instruments–and pumped up mids. Tweaking the EQ settings in the Headphones Connect app helped compensate for some of this, but it was really just a band-aid; I could never arrive at a sound that I liked.

Listening to the Led Zeppelin classic “Stairway to Heaven,” for example, Jimmy Page’s acoustic guitar work contains some very delicate plucking and strumming that just don’t come through clearly on the LinkBuds. The instrumentation is there, it’s just not easy to pick out, and the nuance is lost. The same problem is on display during Miles Davis’ “So What.” The subtle high-hat clicks, the brush on the snare, the pulls on the standup bass just don’t come to life. The piano work and the horns come through nice and clear in that midrange and get pushed forward in the mix, but that makes those elements stand out more than they should.

On the low end side of things, the DJ Snake/Lil Jon collaboration “Turn Down for What” is missing all the rumble and push I look for in this track. The slap from the bass hit is present, but ends up feeling like there’s no follow through and just doesn’t satisfy. Big Freedia’s “N.O. Bounce” falls just as flat; the mid-range is very busy, and there just isn’t any low end that propels the beat forward, resulting in a very messy rendering.

I could go on with examples from my listening tests, but I think you get the idea. Where the LinkBuds do excel–thanks to the tuning and open design–is in the spoken word recordings. I listen to hours of podcasts every week, and between that and audiobooks, I found these earbuds to be a perfect pairing, thanks to the midrange boost and the more natural soundstage. This characteristic also makes phone calls sound great, and I was able to hear the person on the other end with fantastic clarity and presence. It was almost like they were in the room with me. On the other hand, the quality of the LinkBud’s microphones was nothing to write home about, being highly susceptible to wind noise, but that’s certainly not unique to these earbuds.

Bottom-line opinion of the Sony LinkBuds

When it comes to buying advice, my LinkBuds recommendation comes with a ton of caveats. While I enjoyed using them, I realize there aren’t a lot of people like me who both appreciate open-back headphone designs and listen to a ton of podcasts. And with a $180 price tag, I expected a higher-quality music experience from these earbuds, and I wish the fit wasn’t so fiddly.