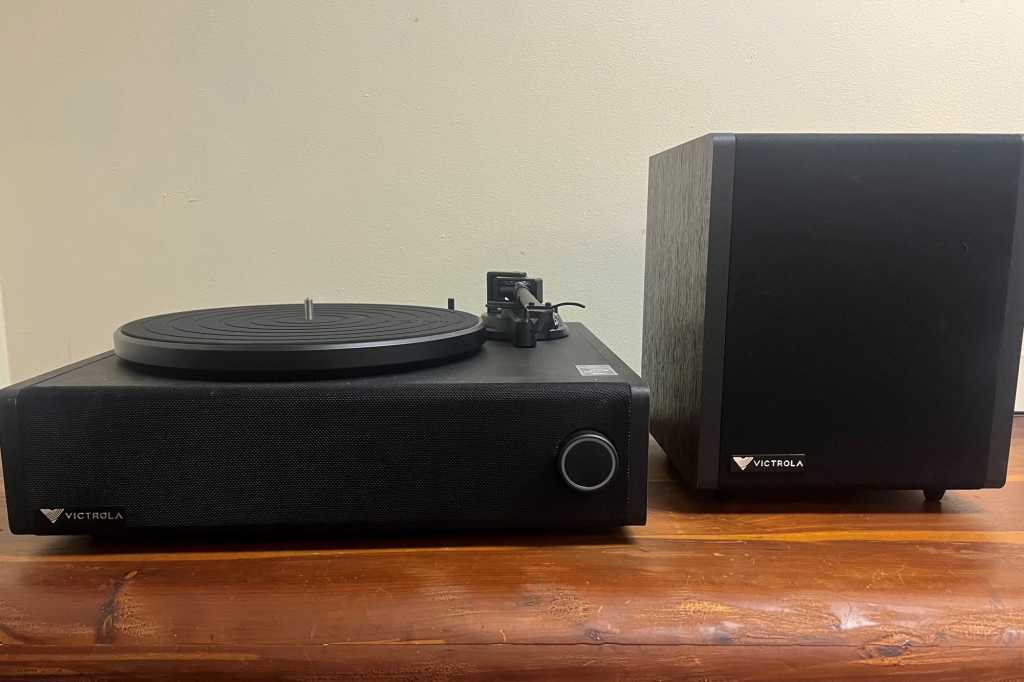 The Victrola V1 Music System is a decided step up from mass-market budget options. Its solid design and versatility make it a good choice for listeners who prize devices that just work.

The Victrola V1 Music System is a versatile, all-in-one solution that includes a turntable, speaker, subwoofer, and RCA inputs that allow you to connect a CD player or tape deck. If you prefer to play audio through another speaker—or wireless headphones—the Vinyl Stream setting uses Bluetooth for streaming to that device.

You can also use the built-in speaker and the subwoofer as a Bluetooth receiver to play music from a phone or other device. The V1 System is a solid choice for a someone who wants to keep their setup as simple as possible or who’s just getting started with home audio.

In addition to being a record player, the Premiere V1 Stereo Turntable unit can be a streaming speaker, a receiver for a CD player or cassette deck, or a soundbar for a television.

The turntable is a belt-drive unit and comes with Victrola’s top-of-the-line VPC-190 moving magnetic cartridge. There’s an aluminum tonearm custom-designed for the V1 and a silicone slipmat. Weighing 17.4 lbs., the unit measures 16.5 x 15.1 x 8 inches (LxWxH).

The V1 requires some setup, the kind that will be familiar to experienced turntable users, but possibly intimidating to someone new to vinyl. The counterweight doesn’t come attached to the tonearm, so you’ll need to slide it on and work out balancing the arm before setting the tracking weight and anti-skate control. Fortunately, YouTube is full of example videos that will guide new users through general setup principles.

There’s a lot of ways to use the Premiere V1, so let’s go through the list. You can:

Hold down the button on the front of the V1 to activate the device in vinyl mode. Press again to cycle through the Vinyl Stream, Bluetooth receiver, optical, and auxiliary modes. The same button rotates to control the volume. There’s also a battery-powered remote that cycles through the modes and controls volume.

To play a vinyl record, remove the dust cover, select your record speed (33 or 45 rpm) with the rocker switch on the back of the unit, and lift the tonearm. Once you move the arm across toward the LP, the turntable begins to spin. Lower the cartridge onto the vinyl to play. Once you reach the end of a side, the turntable stops automatically, so there’s no racing across the room to keep the needle from bumping against the center label.

The VPC-1980 cartridge is rated at 1,000 hours of use. You can’t swap out a damaged or worn-out stylus, so you’ll eventually need to replace the entire unit.

The included S1 subwoofer is paired with the V1 out of the box, so setup was almost as simple as turning on the two devices. Turn on both units. Press the mode button on the S1 until it quickly flashes blue, then press and hold the Pair button on the V1 until you hear a pairing notification. After that first connection, the two units have been rock-solid through a couple of months of testing.

If you prefer a wired connection, there’s a sub output on the V1 and a sub input on the S1, plus an included sub cable. The S1 has both a volume knob and a crossover knob to let you determine the frequency where the sub takes over from the main speaker.

Listening to the Victrola V1 System

If you’re buying the Victrola V1 Music System, you’re choosing it for ease-of-use and versatility at a good price. The S1 subwoofer elevates the sound into the pretty good range and the overall quality is a definite step up from the budget systems for sale at the big discount chains.

Does the turntable sound better when using Vinyl Stream to send the music to a better-quality Bluetooth speaker? Absolutely, but that seems like an edge case use for this system. People who want to stream music from a turntable to a wireless speaker are likely going to spend their money on the best turntable-only device to pair with their setup.

The V1 Music System is the modern version of the all-in-one home stereo, with the speakers built into the base underneath the turntable instead of tucked into tiny bookshelf cabinets designed to be snapped onto the main unit for easy portability.

As far as audio quality goes, I first thought about other similar systems I’ve tried that definitely sound better than the V1, but soon realized that all of those options cost quite a bit more and usually didn’t have the inputs to support additional audio sources.

The black and walnut design is tasteful, and the system is easy to operate once you set it up. Those will be the biggest selling points for the buyers that Victrola is trying to reach. The audio is a decided step up from the mass-market, all-in-one systems I’ve encountered over the past few years, and at not much of a premium over those less-than-listenable options.

There’s one weird thing about the V1 that might be a deal breaker for some. Rather than a traditional, hinged dust cover designed to cover the entire plinth, making it usable during vinyl playback, Victrola came up with a custom design that sits flat on the turntable and arches over the tonearm. You can only use the cover when the turntable is not in use, and I had a hard time figuring out where to put it when I was playing records.

You might find its design to be unique or enjoy the way it looks on the V1, but the break from tradition will be too much for some folks to handle.