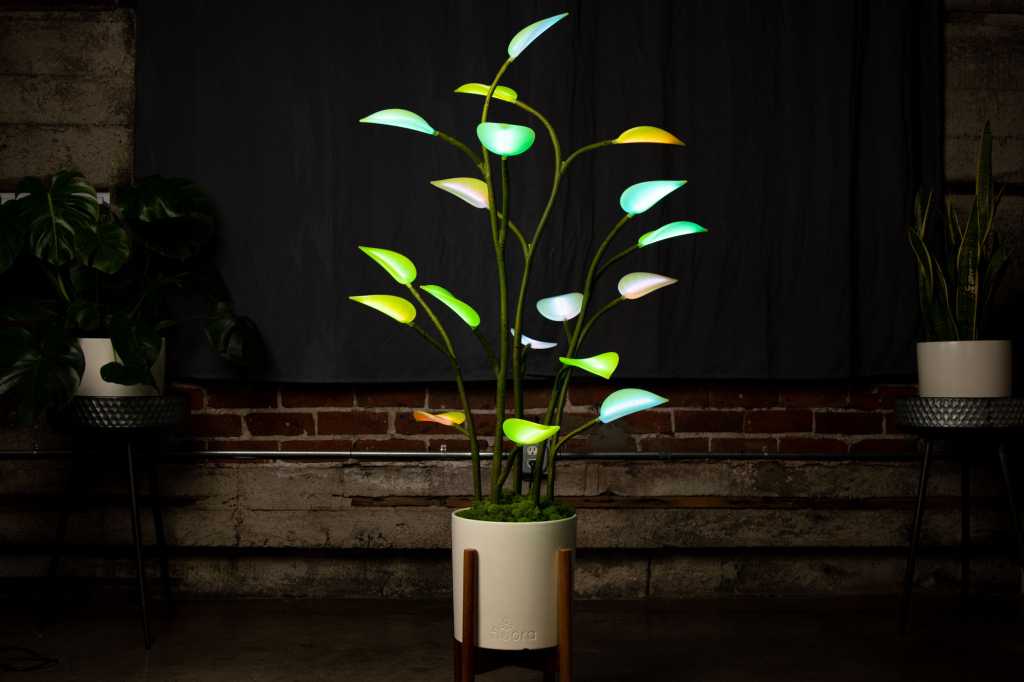 Image: Color+Light
At a glance

The Fluora digital house plant will be a tough sell for some, but a game-changer bit of décor for others.

No green thumb? Wish your plants could do more than just sit there? Looking for something different when it comes to accent lighting? Have we got a smart device for you: The Fluora LED Houseplant, which is exactly what it sounds like.

Fluora is an inventive yet likely divisive product that allows you to replace that pesky floor plant with one that lights up, shifts colors, reacts to music, and more. If you’re familiar with anything in the Govee line, you’ve got the basic idea: Designed with five stalks and a total of 18 seven-inch-long leaves, each with 15 individually addressable LEDs, that’s 270 LEDs worth of color that can illuminate a corner, start the conversation at a dinner party, or soothe your mood through the power of light.

Fluora arrives in two boxes and it takes time to set up. The brains of the device are in the ceramic pot, which contains the electronics, a power cable, and five attachments into which you place the “artisan crafted stems.” Cabling connects each stem to the electronics inside, after which each LED leaf must then be attached to a point on one of the stems.

Like an artificial Christmas tree, the stems must then be gently bent into a more natural design that resembles a real plant. Whether you want a more vertical plant (about 4 feet high) or a bushier, more squat design, this is where you get to call the shots. Lastly, a bag of moss is included that lets you cover up all the electronics in the pot. There’s also a wooden stand that lets you elevate the flowerpot a few inches, available for an extra $29. All told, the setup process isn’t difficult, but it is time consuming, so plan accordingly.

After it’s set up, things finally get fun. A power button inside the pot lets you fire things up, and there’s a single function button that lets you cycle through various operational modes with names like Twinkle, Leaf Swirl, Rainbow, and Stem Fade. Each one is some variation on shifting colors, changing brightness, and LEDs blinking on and off in a predetermined pattern. Several modes that let the Fluora react to ambient audio are also included, though I found in my testing it needed a significant amount of volume to respond.

You can get a lot more creative in Fluora’s mobile app, though it takes a little bit of elbow grease to get it set up. For example, the app doesn’t have any integrated logic to connect to your Wi-Fi network. You must manually connect to the temporary Fluora network in your phone’s settings, then wait for a pop-up to ask you to bridge the connection over to your home network (2.4GHz networks only). You’ll want to refer to the printed manual for the full instructions; the process is not entirely intuitive without it. The good news is that the setup process eventually worked for me, with only minimal hiccups along the way.

There’s plenty more to delve into within the app, whether that’s switching among the various modes, setting a daily timer (although you can’t set up different timers for different days), and fine-tuning color options. You can certainly set the Fluora to display a single color on all 270 LEDs, but that is really defeating the purpose of the device; Fluora looks best when it’s pulsing and shimmering. Here you can tweak brightness, hue, and saturation and a variety of more arcane settings—using musicians terms such as attack and decay—to your heart’s content. There’s not a lot of guidance to using these settings, which is a common problem with these types of devices, but trial and error is a big part of the fun.

The overall effect, like similar lighting devices, is striking—if not more than a little weird. Here we have the plant version of the “uncanny valley,” where the finished product doesn’t look organic, but it doesn’t look 100 percent artificial, either. As noted earlier, the overall impact and impression of the Fluora will be highly personal. I think it’s quirky and fun. My wife thinks it’s an eyesore—and an expensive one, at that. Here’s hoping she doesn’t try to water it.